American Thanksgiving is fast approaching, which means December and the lunacy of the holidays are around the corner, as well.  One of my daughters (the standard omnivore) was visiting us a couple of weeks ago, and we decided to start testing a few recipes for our Christmas and end-of-the-year menus.  I wanted to try cooking a meat stuffing that one of my aunts once made for a Christmas Eve dinner; I was ensorcelled by the rich mixture of ground meat, fruits and nuts, in a metaphorical tryst next to the white meat from the bird.  It is a very popular recipe in Mexico, but my mom always favoured the celery and bread staple, because she thought it was too much to stuff meat with meat.  It is mainly used for the Christmas turkey, but since it was just the three of us this time (including my husband), we tried with a chicken instead.

Slice leek and celery thinly; peel garlic; grate nutmeg; wash, peel and chop apple.  In a wide, large pan, warm up oil over medium heat; add leek and celery and sauté until translucent. Mince garlic and add to the pan:

Continue stirring and cooking for one minute, then add meat.  Break into small pieces and mix with the vegetables; continue cooking until no longer pink, then add thyme, cinnamon and nutmeg:

Stir to incorporate, then add raisins, nuts and chopped apples; Cook for another five minutes, stirring occasionally.  Season with salt and pepper, and pour vinegar in the pan:

Stir well, adjust seasoning as needed.  Transfer to a bowl and let cool: 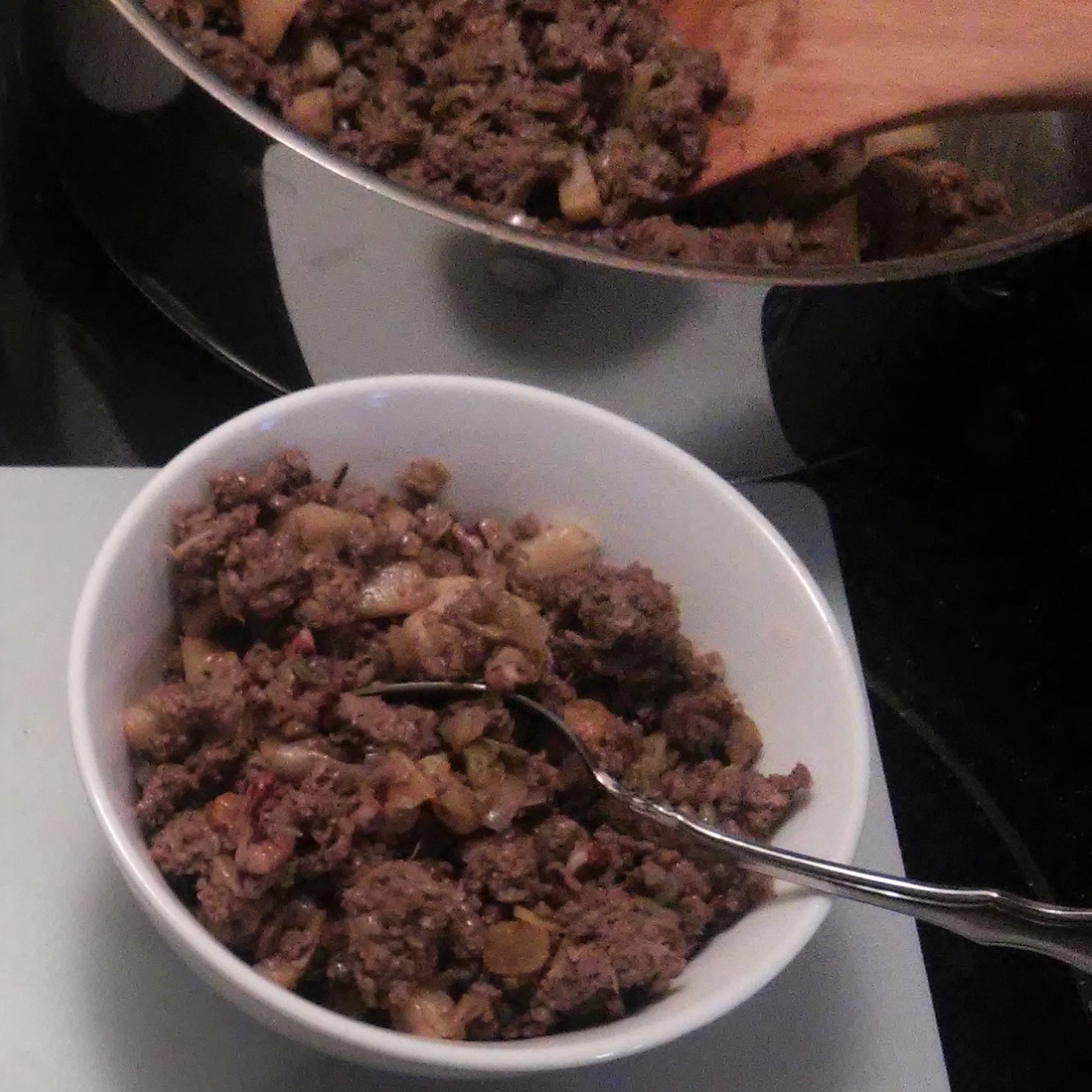 It tasted delicious even on its own, and there was enough to stuff a medium turkey, so we divided it before handling the raw chicken, and reserved some to serve on the side.  We kept the preparation of the chicken very basic, using only two tablespoons of butter, salt and pepper:

After cleaning the cavity and skin, and removing any small feathers, the chicken was patted dry:

About two cups of stuffing were enough to fill the cavity; then, the skin on the breast was gently lifted, and one tablespoon of the butter and some salt were used to rub under it:

The second tablespoon of butter, more salt, and pepper were used to rub all the skin; the chicken was placed on a rack on a rimmed tray, and about one quarter of a cup of water was poured in the tray:

The chicken was covered with foil and roasted in a preheated oven at 350°F (180°C) for about two hours; then the foil was removed, and the chicken allowed to brown until the skin was crispy.  The total cooking time was almost three hours, until the juices were running clear; it was a long time for a chicken, but probably because stuffed birds take longer to cook.  After letting the chicken rest under a tent of foil for a few minutes, it was served with the reserved stuffing (reheated), and bowls of peas and sweet corn kernels: 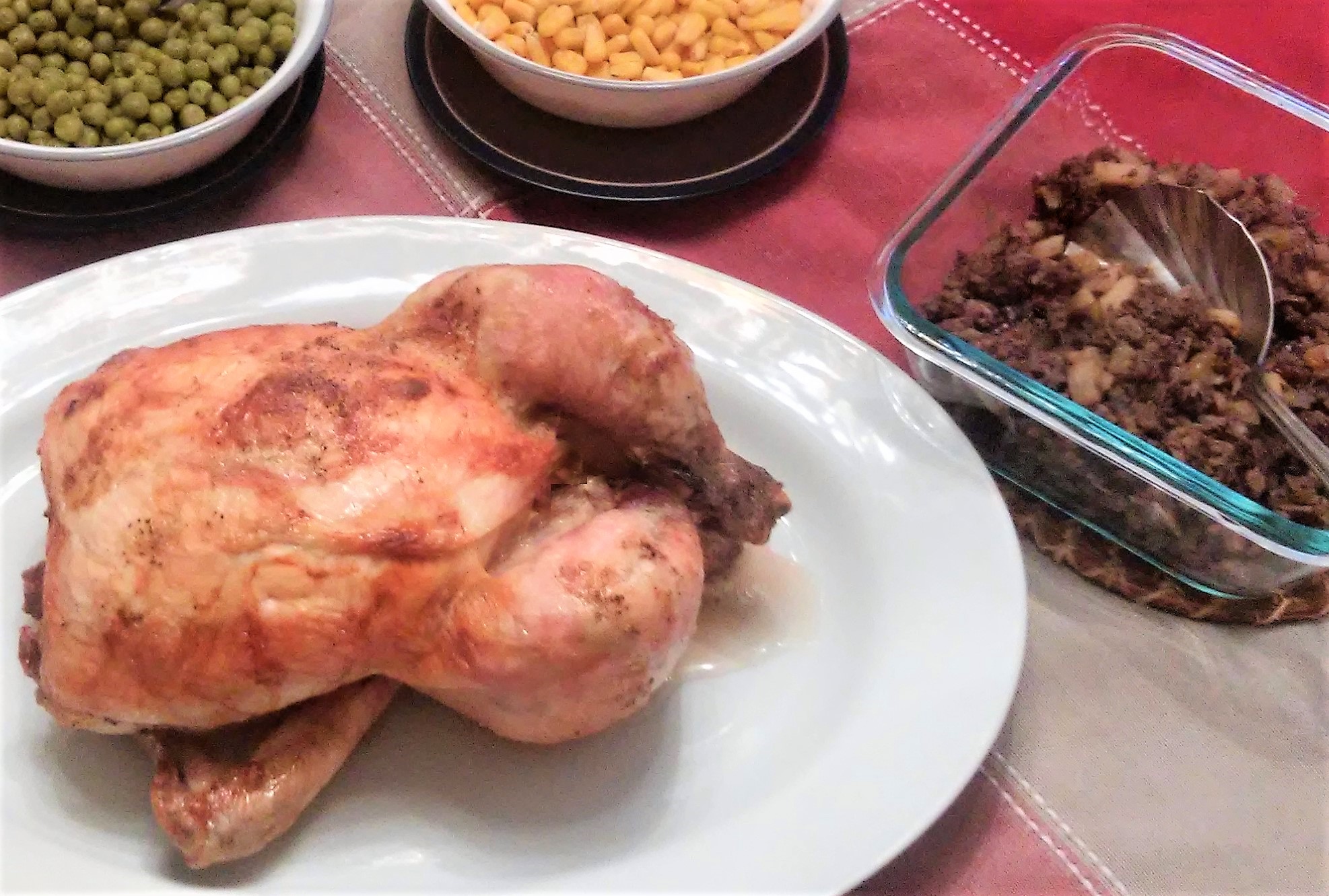 It was all a very tasty trial.  We thought that the baked stuffing and the portion reserved were equally nice, maybe the only difference was that the reserved portion got a little dry; this can be prevented by adding broth or juices from the pan when reheating.  That is probably what we will be doing when it is time to cook the big turkey next month.

I am joining What’s for Dinner? Sunday Link-Up #175 with gracious hostess Helen @ The Lazy Gastronome.  This time, Helen is featuring a very nice selection of dishes, from appetizer to dessert, and my stuffing fits right in with her theme, to complete a fabulous Thanksgiving menu.  Happy Thanksgiving!

I am sharing my recipe at Over the Moon #250, graciously hosted by Bev @ Eclectic Red Barn, and Marilyn @ Marilyn’s Treats.  Very special thanks to Bev for featuring my recipes for Traditional Sweets with Amaranth at this party.