Burrita is the female form of “little donkey” in Spanish.  As a dish, it is assembled with wheat flour tortillas, and then grilled, just like its male counterpart (burrito), but the filling is very different; moreover, burritas are usually folded, not rolled. Burritos are originally from Northern Mexico, while these burritas are popular in Mexico City (Ciudad de México, abbreviated CDMX), and other Southern Mexican states.

Warm up a skillet or pan over medium heat; brush with butter or oil (if using).  Warm up tortilla in the skillet for about 30 seconds (photo below, left); flip and top with ham slices and cheese (photo below, right):

Fold in half and grill for about one minute; flip to grill the other side:

Once the cheese has melted, serve immediately with toppings on the side (if using).  I had mine with green sauce: 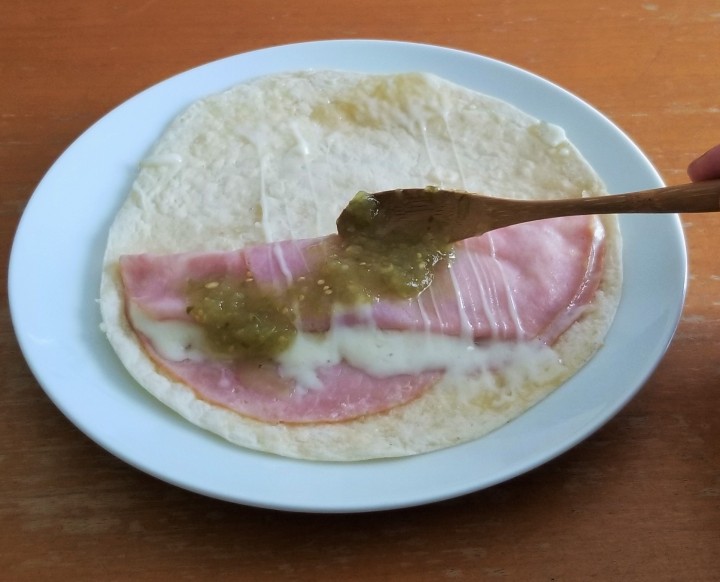 I first heard about burritos when I was a teenager, and I thought they were strictly Tex-Mex; later I learned that California is also famous for its burritos, and only recently, I found a few recipes for authentic Mexican burritos (for example, the ones in my previous post.)  In contrast, one of these burritas was a standard light supper growing up in Mexico City, as far as I can remember.  They also became my favourite comfort food when I was in high school, to bring me back to a civilized state after what I described in a typical teen-age acerbic tone as “endless hours at that [educational] institution.”