Last month, while in Mexico, I had a chance to attend a bridal shower with my sister; the bride-to-be was wearing an elegant evening gown, and the restaurant hall and treat table were decorated accordingly:

In addition to a beautiful and tasty cake, the table featured all sorts of savoury snacks, fruit-based sweets and a nice selection of mini cakes and pastries: 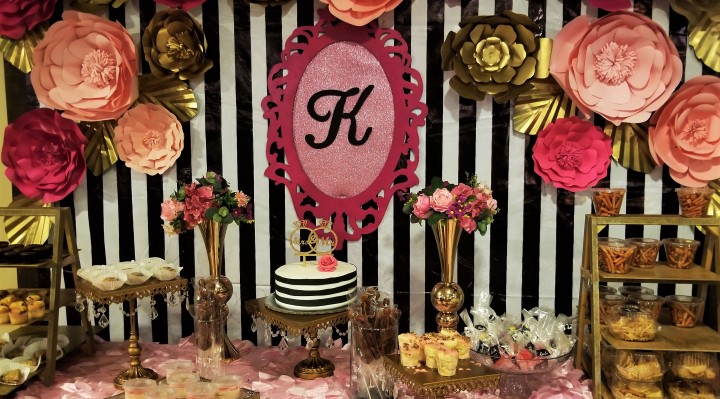 I particularly enjoyed two that were homemade.  The first was a Tres Leches parfait, a delightful classic of airy cake soaked in a three-milk syrup, provided by one of K’s sisters:

The other was a creamy lime and cookie layered cup, made by one of K’s sisters in-law:

There were too many different flavours to try them all (especially after a generous Chinese dinner), and at the end of the gathering, we were invited to fix a plate with sweets to take with us.  I scored more mini cakes, as well as a buñuelo (Spanish sweet fritter, also homemade), and one of the biggest slices of cake I have ever seen:

I had not met the bride-to-be before that day, but she was charming and friendly, and even invited me in the spot to her wedding on December 21!  Although unfortunately I was not able to attend, I learned from my sister that it was a beautiful event; I wish K and her now husband all the best, and a marriage filled with love, health and joy.

I am planning to post recipes for a full-size traditional Tres Leches cake, as well as Mexican style buñuelo fritters some time soon, but in this post, I am sharing my take on the layered lime treats.  The filling was a no-bake condensed milk mix, with lime flavouring (click here for a similar recipe).  A full size pie with this filling has always been a very popular dessert in Mexico; in this version, the filling is poured over a cookie crumb and butter crust, but for the layered mini cakes, Maria cookies were used instead:

When I was little, I thought galletas Marías were Mexican; later on, I was sure they were either originally from Spain or Italy.  When researching for this recipe, I found out that Marie biscuits were actually first baked in London, England, in 1874, in honour of the Grand Duchess Maria Alexandrovna of Russia in occasion of her wedding to Prince Alfred, the Duke of Edinburgh and second son of Queen Victoria.  These cookies are inexpensive, mix well with any sweet topping, and also work crumbled – or layered, as in this recipe – absorbing moisture and flavour from creamy fillings.

For my version, I did not want to deal with the aftermath of plastic waste.  To avoid using plastic cups, I modified the filling by using cream cheese and whipping cream, for a thicker batter; this allowed for free-standing layers that could be placed in paper cups instead. 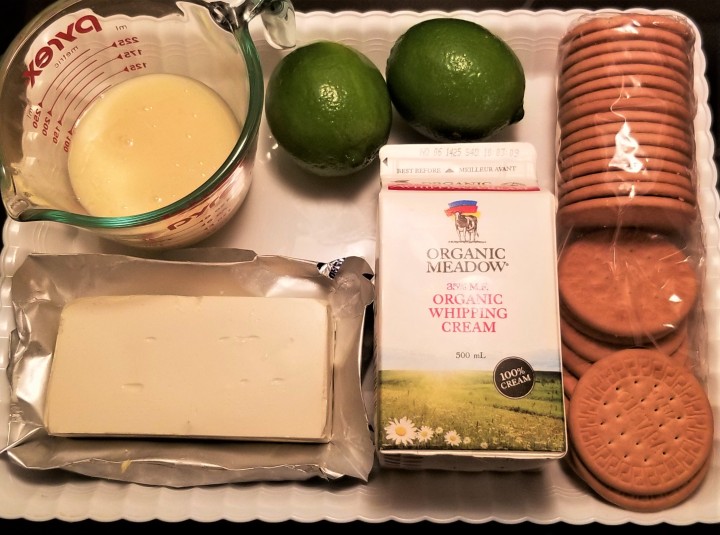 Grate the zest from all around one of the limes (green layer only).  Slice both limes and squeeze juice.  I usually squeeze one half on top of the grater, to collect as much zest as possible:

I had about 1/4 cup of juice from the two limes, and 1 teaspoon of zest.  Reserve.  Using an electric mixer, blend the cheese and condensed milk at high speed until fluffy, then add juice and zest, in two or three intervals (photo below, left); continue mixing at medium speed, to perfectly incorporate the cheese and lime mixtures (photo below, right):

Increase speed to high, and add whipping cream (photo below, left); continue beating until soft peak are formed (do not overmix at this point, photo below, right):

Place one Maria cookie at the bottom of large paper cups (about 18) and scoop two heaping spoons of the cheese filling on top of each cookie (photo below, left); cover with another cookie, pressing down carefully just until the filling is visible at the edge (photo below, right):

Repeat with a second layer of filling, and a third cookie on top.  Store sandwiches in a covered container in the fridge for at least 4 hours or overnight: 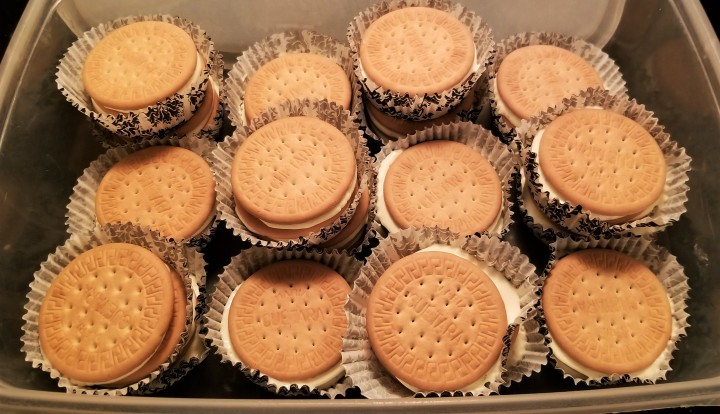 This recipe makes approximately 18 conveniently portable sandwiches.  Display on a tray for a buffet style gathering, or serve individually on small plates, as shown at the top of the post and below: 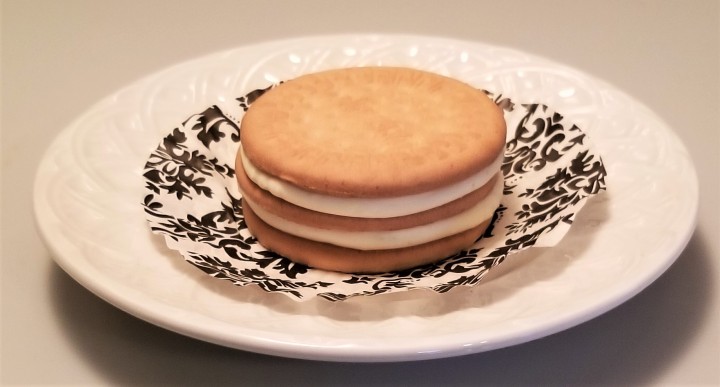 (Note: I flipped the paper cup inside out to show off the design on the plate).  The filling had set to perfection, so the sandwich was firm enough to eat without a fork:

This updated version of the classic no-bake pies of my childhood had all the punch of citrusy limes, and the sweetness of condensed milk, with the added freedom of no-utensil portability.

I am bringing my recipe to Full Plate Thursday #464 with Miz Helen @ Miz Helen’s Country Cottage.

I am joining Fiesta Friday #308 with Angie @ Fiesta Friday, co-hosting this week with Mollie @ Frugal Hausfrau.