Almost exactly 2 years ago, I shared a post about onions, in particular, cebollines, a generic name in Spanish that may refer to onion chives (Allium schoenoprasum), garlic chives (Allium tuberosum), and also some types of green onions, such as very young bulb onions (Allium cepa) with their stems, or true scallions (Allium fistulosum).  There is another type of green onion, though, which is so important on the Mexican grill, that has its own name: cebollitas de cambray; they are a staple at Mexican BBQ parties (parrilladas) and taco restaurants (taquerías), grilled and slightly charred.

These onions are known as “knob onions” at some specialty produce markets, or by gardeners, as multiplier onions (Allium cepa, var. aggregatum), which is the same botanical group as shallots.  Multipliers are similar to shallots in terms of bulb size at maturity, about one inch (2.54 cm) across, and their growing habit, in which a plant is formed by a cluster of several stems that developed from a single set.  As of flavour, though, multipliers are just like a miniature version of the classic white onion, with a clear and very fresh taste.  In the photo below, a comparison between a scallion (top, no bulb) and a multiplier “knob” onion (bottom, bulging white bulb):

Last year, I decided to try growing multiplier onions in my backyard.  In the spring, I bought a batch of sets (similar to the ones shown pictured at the top of the post) and planted them in rich soil; they took well, but being the impatient gardener that I am, mostly harvested them still immature, when they were just slightly forming a white bulb:

This year, also impatiently, I ordered another batch, and shortly after that, realized that a few forgotten bulbs from last year had come back in my garden:

In the photo, below, a close-up, showing that a single bulb had “multiplied” into a cluster of several stems:

Instead of fumbling with trying to cancel the order (considering that seed companies are extremely busy, due to the pandemic), I decided to just start an additional crop.  I received my new order last week:

Inside, wrapped in craft paper, there was a mesh bag (photo below, left), which contained a dozen onion sets (at the top of this post, and photo below, right):

I planted the new sets in one of the beds with multiplier onions from last year, to compare their growth side by side, as long as they were there.  About a week later, they were already sprouting (the plant in the middle is from last year): 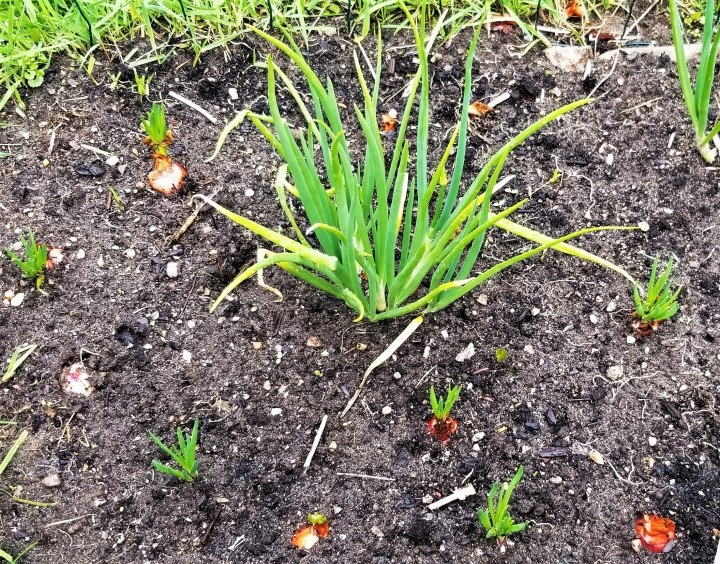 I will try to contain “the harvesting blues”, and wait until both crops form bulbs (maybe impatiently, but I will).  I am sure they will be oh, so nice! grilled and slightly charred, the Mexican way.

Incidentally, I am also growing true scallions; maybe then I will not feel the urge to  harvest my multiplier onions prematurely, hehe.  I usually start sprouting seed in boxes, indoors, and continue with more batches every three weeks:

The little seedlings are transplanted to a garden bed once hard frosts are over; it is amazing how they already look like a scallion, but in a miniature size, about two inches in length:

Then, they just need consistent watering and sun:

It is great to have scallions in the garden, since some recipes call for one or two, and it is very convenient to just go to the backyard, and grab what is needed.  I should be able to harvest some in about one more month.

19 thoughts on “Multipliers – A Special Kind of Onion”