Milanesa is a breaded cutlet, which in Mexico may refer to different kinds of meat (chicken, beef, veal, pork).  I avoid deep frying as much as I can; I checked several recipes for breaded cutlets: thin or thick cuts; deep-fried, pan-fried or baked.  There are many, but for the ones not deep-fried, the results looked either pale or they called for generous additions of oil, which defeats the purpose of not deep-frying.  I did some testing of my own to optimize the breading and baking process, to achieve a golden-brown, and crispy, baked milanesa with no oil involved.

From the recipes, a few observations: the oil temperatures for deep-frying breaded foods typically mentioned were between 350-390°F; most recipes I checked for baked breaded cutlets used 350-375°F for the oven temperature; cutlets are a very thin cut, so the total cooking times for baking were usually around 10-12 minutes, sometimes flipping halfway.  Some recipes insisted on specific breadcrumbs, and the ones with coarse texture seemed to achieve better results.  I also read an interesting article [1] which mentions a restaurant technique of pre-frying food and then finish cooking in the oven right before serving, a little like the double stage frying of French fries.  That gave me the idea of pre-toasting some breadcrumbs before breading, to give the colour of the coating a head-start towards golden perfection.

Armed with all this information, I chose generic breadcrumbs from the bakery section at my local supermarket, and panko (Japanese style), to start with regular crumbs, and a coarser texture, respectively.  To avoid drying the meat, I stayed on the low side of the temperature ranges cited for frying and baking, which is 350°F, and used the same temperature for toasting the crumbs, to be able to compare as-bought and pre-toasted crumb coatings.  I used no oil during preparation and there was no oil applied to any surfaces either.

The photo on the left shows the crumbs before and after baking a batch of each separately on cookie sheets lined with ungreased parchment paper, at 350°F for 10 minutes.  The panko crumbs showed a more rapid and darker browning.  The difference in crumb size can be appreciated.  These four different batches of crumbs were used to bread four beef cutlets, by coating each on both sides with flour, then an egg wash and finally pressing the bread crumbs (photo right).

The toasted panko cutlet looked almost done (above, bottom right), so I was hoping not to end up burning it after baking the cutlets.  I baked all four cutlets on the same baking sheet for 10 minutes at 350°F.  I was surprised that the colour of all four had barely changed (below photo left, after flipping cutlets).  The meat was cooked at this point, but in the name of science, I continued baking the cutlets to see how long it would take to brown the coatings.  After another 10 minutes (below photo right, cutlets flipped again), the pre-toasted panko looked beautifully golden, and was very crisp, so I stopped the process, although the other three cutlets still looked pale (below photo, right).

In terms of flavour, the darker the coating, the crispier and tastier the cutlet; it was surprising that the meat was not completely ruined, just a little on the dry side; my husband said it was almost like eating a piece of breaded jerky – “you might be on to something good here” was his comment.

In conclusion: pre-toasting the crumbs results in a darker, crispier coating after baking the cutlets.  Both the toasted generic and panko crumbs changed just slightly during the first 10 minutes of baking, and the cutlets were fully cooked, so the crumbs may be pre-toasted until completely golden-brown before breading, without risk of burning during baking.  It is nice to have full control of the final crumb texture and colour before even breading the cutlets, just by choosing either fine or coarse crumb, and toasting accordingly to the desired final colour.  Last, but certainly not least, absolutely no oil is required during the prepping or baking steps. 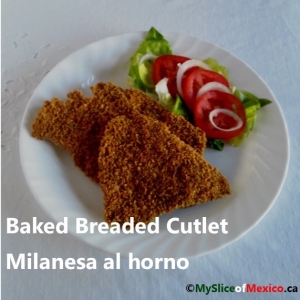