When I was a teenager in Mexico City, New Year’s Day usually involved a quiet morning, maybe catching a little of the Rose Parade* on TV, transmitted live from Pasadena, California, then brunch, and just relaxing for the rest of the day.  My sister and I got into our own tradition of going out to the only nearby place that would be open on that day: a restaurant of the Mexican chain VIPS™.  My order was always the same: Pepitos.

This sandwich originated in Spain, at first simply consisting of grilled veal placed at the centre of a partially halved crusty bun.  Some stories attribute the name to a guy called Pepito (a common nickname for José), who requested hot grilled veal in a bun – instead of the usual cured cold cuts – at his father’s restaurant Café de Fornos in Madrid; other people were intrigued by the sandwich, and asked for “one just like Pepito’s.”  The business has closed since then, but the sandwich and its name prevailed, and from there, later renditions of Pepitos in Spain, Mexico and other Latin American countries, may include any toppings imaginable: sauces (from sweet ketchup to spicy guacamole), raw or grilled vegetables, cheese, marinated or processed meat (often including spiky seasonings), etc.

Panini buns or baguette sections are halved lengthwise, lightly buttered, and toasted, then filled with a layer of beans, strips of steak and a generous scoop of guacamole: 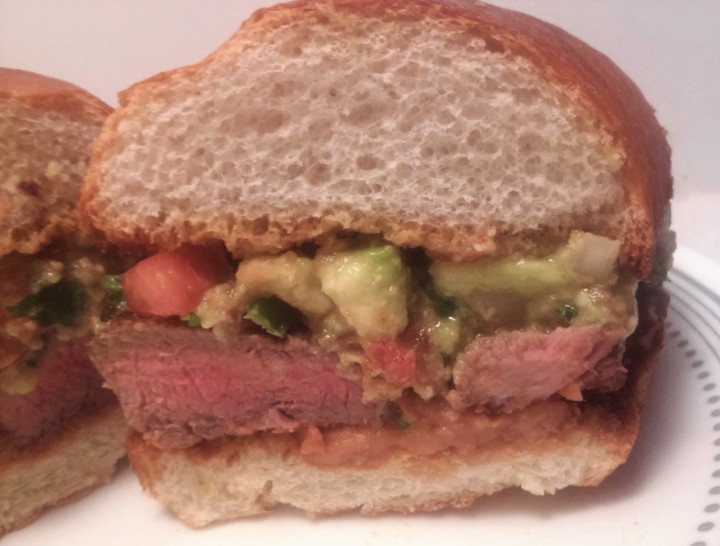 More recently, I have seen versions of chicken or chorizo Pepitos on menus, but to me, the classic beef steak Pepitos will continue to be the natural choice.

Coincidentally, my daughters and I were at the mall yesterday, and saw a new place at the food court featuring Venezuelan Pepitos.  We tried a few sides, such as fried yucca (cassava), and tequeños (kind of cheese sticks), pictured in the photo below, on the left; my omnivore daughter and I also shared a classic Venezuelan Pepito sandwich, with marinated grilled steak, ketchup, cheese and a good sprinkle of crispy potato sticks, as seen on the photo below, right:

The flavours in the Venezuelan Pepito were very different from the Mexican version, but I really enjoyed it.  I believe the success of a Pepito is based on the quality of the steak; a good cut, properly grilled, will support practically any toppings and variations.

* A transmission fluid leak might have caused a float to ignite during the “2019 Rose Parade” this year, resulting in a delay from the momentary madness and confusion; no injuries were reported, but the creators could face a fine.

I have answered Fandango’s Provocative Question #8 : “When was the last time you did something for the very first time? What was it that you did?”, since it was the first time I tried a Venezuelan Pepito.

I am joining Fiesta Friday #257 with Angie @ Fiesta Friday, and co-hosts this week Suzanne @ A Pug in the Kitchen and Kat @ Kat’s 9 Lives

6 thoughts on “Pepito – A Nickname and a Sandwich”