Tomorrow there are several events that have been integrated into the single date of the second day of February for this particular calendar year (a.k.a. 02-02-2020).  First, Super Bowl LIV (check my previous post for a list of tempting snack suggestions), usually scheduled for the first Sunday of February.  Secondly, Groundhog Day, celebrated mostly in Canada and the US, in which different beasts (mostly groundhogs, hence the name, but also including badgers, and even a coati) predict how many more weeks are left before the arrival of spring weather.  Thirdly, Candlemas, a day of purification and – in some Christian calendars – The presentation of the Lord at the Temple, which in Mexico is observed by a service, followed by a meal with tamales, atole, and other corn items.  This has roots in ancient pre-Hispanic rituals of corn offerings for the new growing season, and, as I have mentioned before, the lengthening of daylight periods this time of year always gets me (and many gardeners) in the mood for planning the next season’s crops.

This is a fable of what not to do when choosing seed for planting: 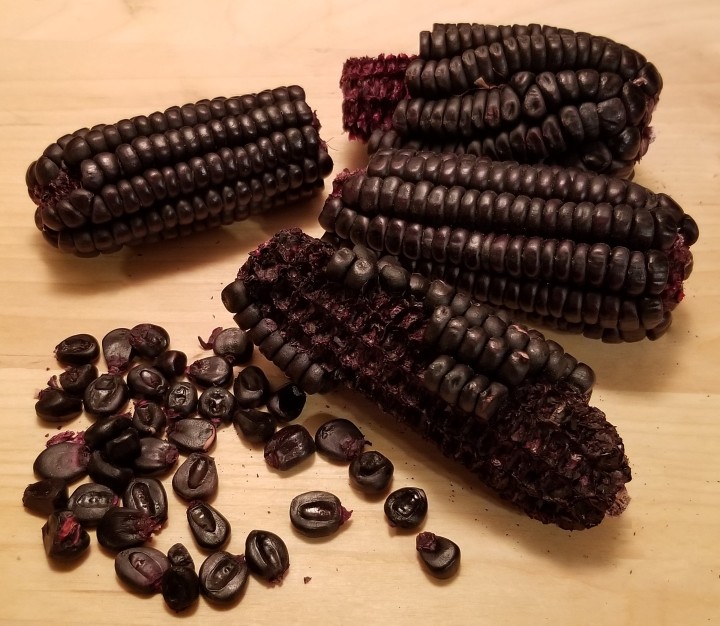 Automatically assuming that they were Mexican, I bought some, thinking that I could either cook them, Mexican style, by hydrating with a calcium hydroxide solution, or plant them and grow fresh purple corn on the cob to eat boiled or roasted.  In that post, I said I would devote some time to follow up on this story.

2) Lack of research on new products – It turned out I could not find food-grade calcium hydroxide in any reasonably small size (1 kg on Amazon was just too much and too expensive for just that small batch of dry corn.)  So, since it was already spring time, I decided to drop the idea of cooking it from dry, but not to renege on planting.

3) Grouping with other seed without checking compatibility – Since it had been four years since the previous corn crop in my garden rotation, I used the same patch where I grew my Three Sisters garden in 2015, this time adding tatume summer squash, and pole beans (corn, squash and beans are the three sister crops) to my purple corn seed.  I sowed in mid-June when the weather was warm enough for these crops, and back in July, I included a photo of this second Three Sisters patch, in an update of  My Backyard Milpa: 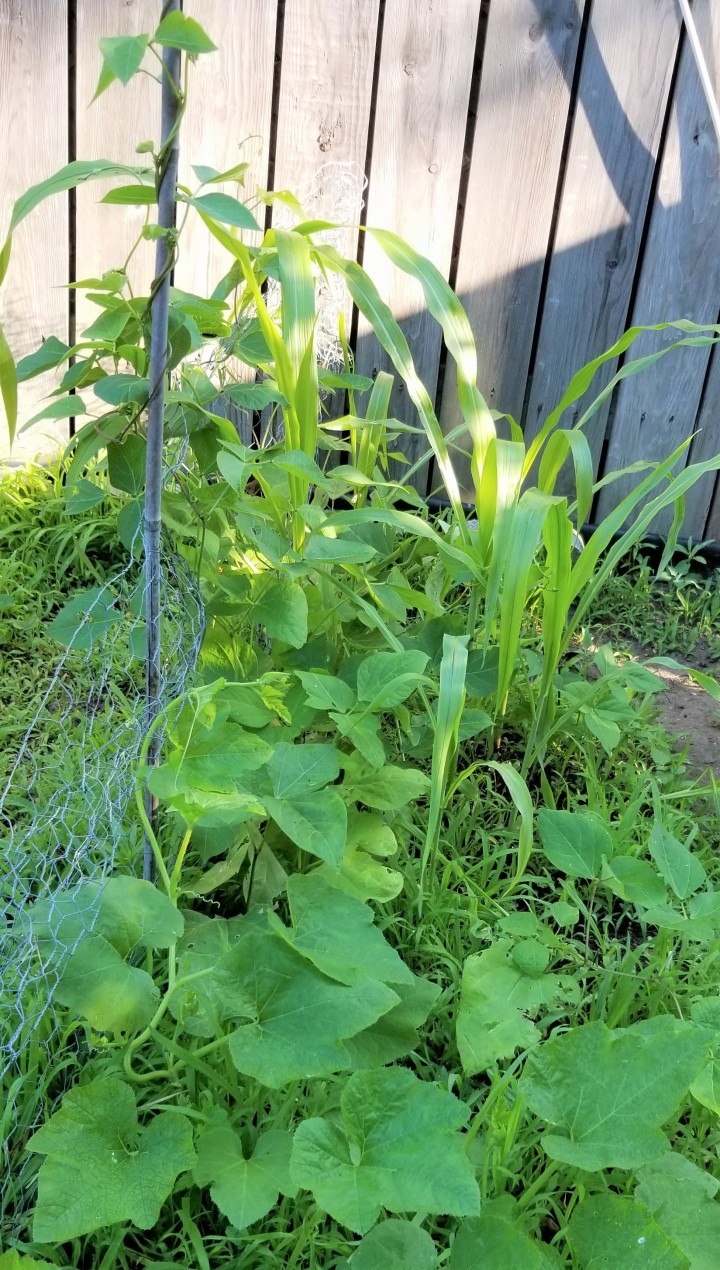 The corn seemed to be growing very slowly, compared to the strong pole bean stalks and large squash leaves.  It all really went downhill for the corn from there.  By early November, I had harvested most of the beans, both green and dried, and the tatume vines had produced fruit and were dying, but the corn stalks had just developed their tassels (full of pollen), and purple cobs were finally growing, but were tiny (see also close up at the top of this post):

Lesson to be learned: Just because corn/squash/bean is the Three Sister team, it does not mean all combinations will grow harmoniously.

4) Sowing seed not suited for local growing season length – Cold weather was coming quickly, so I was not sure if the cobs would have time to mature before the first frosts.  Finally, a week later, I had a family emergency and was away for three weeks; needless to say, by the time I came back there had been a couple of snowfalls and hard frosts, and the wild fauna had taken care of all the cobs, so I am not even sure if they had developed any further.  I finally sat down and searched for growing conditions for this variety of corn; it appears like these purple corn stalks can grow up to 4 m. in height, taking between 120 and 150 days (up to five months!) to maturity.  No wonder they were taking so long to grow.

5) Making assumptions about a crop –   More over, I learned that this kind of corn is not even from Mexico, but from South America, particularly Peru, where the kernels are not eaten, but used to prepare a beverage called chicha morada.

This was looking like a complete defeat for my gardener/cook ego but, I had learned five valuable lessons on how to pick (or how not to pick, rather) seed before buying, and, since I had a bunch of dry kernels left, I decided to honour their origin and purpose, and make a batch of Peruvian chicha morada (click here for the recipe I followed).  In a nutshell, with all quantities to taste: Boil corn kernels in lots of water for several hours (photo below, left); once the kernels have popped, remove from the pot (photo below, right):

Add pineapple and green apple chunks, cinnamon sticks, and cloves (photo below, left); bring back to boil and simmer for at least another half hour.  Remove solids and sweeten with brown sugar (photo below, right):

It reminded me a little of the also corn-based, Mexican beverage tejuino, which I prepared a few posts back.

Now, the recipe said to DISCARD the popped corn kernels! That seemed outrageously wasteful, so, instead, I tried them in a bowl of Mexican pozole (photo below, left), and a few “vasitos” (little cups) of esquites (click on highlighted text for my recipes):

Purple Mexican hominy soup and purple corn kernels with toppings; this worked out not too bad.  I guess “All’s well that Ends Well.”

I am joining Cee’s Flower of the Day (FOTD) Challenge for February 1st, 2020, and Fandango’s February Expressions (FFE) #1.