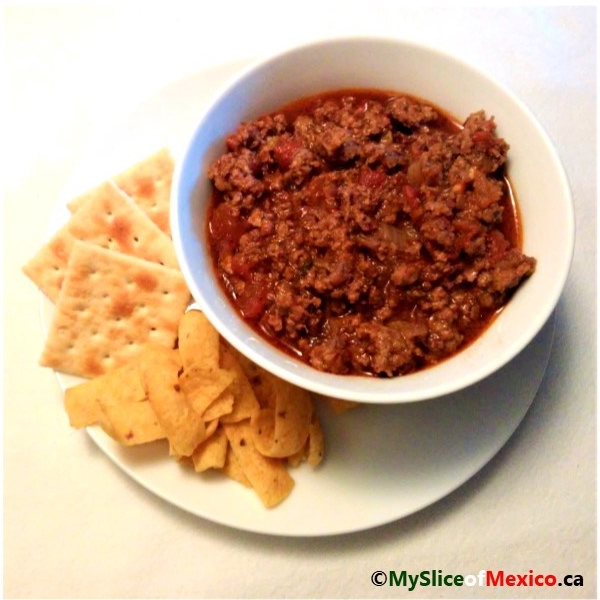 “Chili concocted outside of Texas is usually a weak, apologetic imitation of the real thing.  One of the first things I do when I get home to Texas is to have a bowl of red.  There is simply nothing better.”

Lyndon B. Johnson, 36th President of the United States.

I will let this recipe I have adapted from Lady Bird Johnson’s own “Pedernales River Chili” speak for itself.  The original recipe may be found in the Lyndon B. Johnson Library website (9th recipe scrolling from the top) [1].

Pour oil in a large pot over medium-high heat; brown meat with onion and garlic until meat is no longer pink.  Add oregano, cumin, chili powder, and tomatoes; stir and let cook for two minutes.  Add hot sauce, salt and pepper, and water (or juice).  Bring to boil, then lower heat and simmer, covered, for approximately 40 minutes.  Remove lid, adjust seasoning with salt and pepper, and if needed, cook for a few minutes longer to thicken.  Serve with saltines or corn chips.

Both my husband and I were very impressed by this flavourful and well balanced dish; “It’s a keeper” he declared, while helping himself to a second bowl.

The leftover chili was hardly enough for another meal, and an extra chayote in my veggie drawer was begging to be cooked (end food waste!), so I decided to try using the Texan chili with the very Mexican technique of stuffing vegetables with picadillo.  I washed the chayote, pricked it a few times with a toothpick, and cooked it in the microwave oven for 2 minutes per side.  I sliced it in half lengthwise, and cut around the edges with a paring knife, then scored a grid in the pulp, to hollow each half: 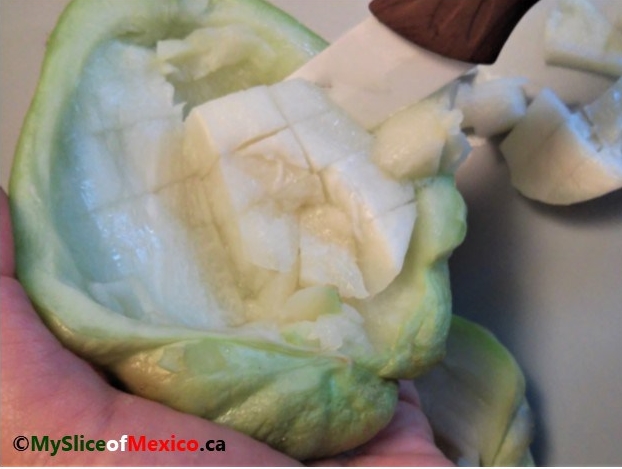 I chopped the cubed pulp even finer, and mixed it with an equal part of chili, using this mixture as the stuffing for my chayote halves.  The classic choice to top them would have been Mexican Manchego cheese.  I sliced some Italian Friulano I had, which was a close substitution (Spanish Manchego is very different):

I topped the chayotes with the sliced cheese, and broiled them until the cheese melted, turning into a literal fusion of International and Mexican flavours: 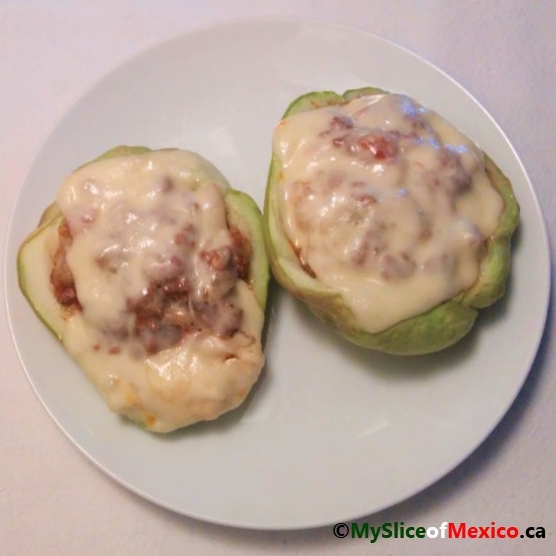 “Welcome to the family” seemed to say Picadillo to Chili con Carne, a single drop of sauce sliding down the pot.