Since the end of the American Civil War, special celebrations and parades have continued in the American and Mexican states on either side of the border, and have extended to the rest of the US.  On the Mexican side, there are two more interesting stories.  A young brigadier named Porfirio Díaz, was instrumental in the victory of Cinco de Mayo in 1862, and he continued to fight with the resistance against Maximilian and the French invasion.  On April 2, 1867, he commanded the final battle against the Empire, once again, in Puebla.  A few years later, Díaz was elected president, position that he held for over three decades, into the 20th Century; during that time, he promoted the celebration of his military victories, featuring Cinco de Mayo as a holiday emphasizing Mexican pride.  This concept has been adopted by Mexican communities in many countries, where Cinco the Mayo is viewed as a celebration of Mexican Heritage.

And last, but certainly not least, it seems like the Cinco de Mayo background stories have come around in full circle:  Paso del Norte, Chihuahua, the remote town where president Juárez first stayed in exile during the French occupation,  was re-named Ciudad Juárez in 1868, to commemorate the president’s stay (see map).  Fast forward to the summer of 1942 in the same city when, curiously enough, a bartender named Pancho Morales, while working at “Tommy’s Place” on Juárez Avenue (now a curio shop), invented the quintessential Cinco de Mayo cocktail: The Classic Margarita. 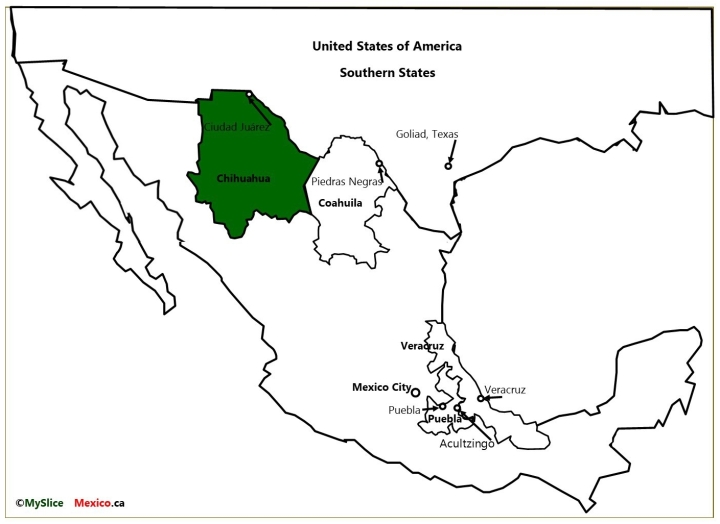 My fifth culinary stop is Chihuahua, honouring the Margarita cocktail’s place of birth.  Tequila (named after the town in the Mexican state of Jalisco) is distilled from the cooked hearts of Blue Agave (Agave tequilana) and has been a PDO (protected designation of origin) product since 1997; Mexican laws allow tequila production only in the state of Jalisco and a few other limited municipalities.  However, it has been enjoyed in the whole country almost since its creation in the 16th Century and – thanks in great part to the Margarita – it is exported to countries all over the world.  In 2017, the top ten destinations were (in millions of liters): the USA, with over 17, 000 (that is 17 billion liters!); Spain, 5.3; Germany 4.6; France 3; Japan, 2; Latvia, 1.8; South Africa 1.6; Canada placed 8th, with almost 1.5; The United Kingdom, 1.4; and Singapore, 1.3.

My recipe for the Classic Margarita is based on the reference by the creator and a recipe for “… a cocktail invented in a bar in Chihuahua” included in “El Gran Libro de la Cocina Mexicana” by Susanna Palazuelos  et al (second edition in Spanish, 1999).  It may be shaken with ice and strained, or processed with the ice for a refreshing frozen Classic Margarita (photo at the top of this post).  I have also developed a non-alcoholic version – my personal favourite – using agave syrup, as a nod to the plant from which Tequila is distilled.

Either ingredient list makes two Margaritas.  Chill 2 cocktail glasses in the freezer for a couple of hours before serving.  Meanwhile, peel one lime with a very sharp paring knife, starting at one end and going around towards the centre, to form spirals:

Right before serving, slice limes in half, and juice (I got about 3 tablespoons).  Rub rim of chilled glasses with one lime half, then either sprinkle salt around the outer side of the rim, or for a saltier drink, place a mound of salt on a plate and dip rim, turning, to cover all the perimeter; set aside:

For the Classic Margarita, pour lime juice into a jar or other container with lid, add tequila, triple sec, and ice.  Cover tightly and shake for at least 10 seconds.  Strain into prepared glasses, and decorate with lime peel spirals:

For frozen Margaritas (Classic or non-alcoholic), pour juice into food processor or drink blender; add Tequila (or agave syrup), triple sec (or scented water), and ice.  Process for one minute until smooth: 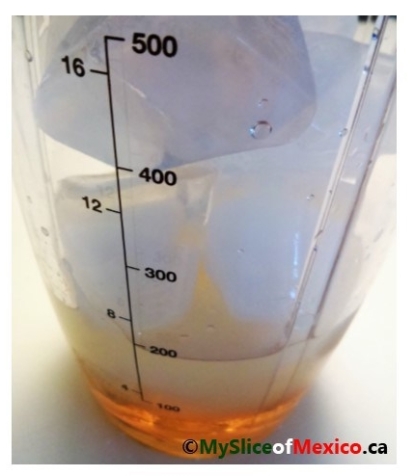 Divide into prepared glasses, and decorate with lime peel spirals. The photo at the top of this post shows a frozen Classic Margarita.  For the non-alcoholic version, add soda water to taste:

This non-alcoholic recipe worked really well; the sweetness of the agave syrup, and the scent of the rose water, blended perfectly with the lime juice.  Adding the bubbly soda water made it extra refreshing.

I am sharing my recipe at What’s for Dinner? Sunday Link-up # 198, graciously hosted by Helen @ The Lazy Gastronome.

And I could not forget Fiesta Friday #274 with Angie @ Fiesta Friday, this week co-hosting with Antonia @ Zoale.com and Liz @ Spades, Spatulas & Spoons.

9 thoughts on “– A Themed Menu for this Cinco de Mayo – Fifth Stop: Chihuahua”