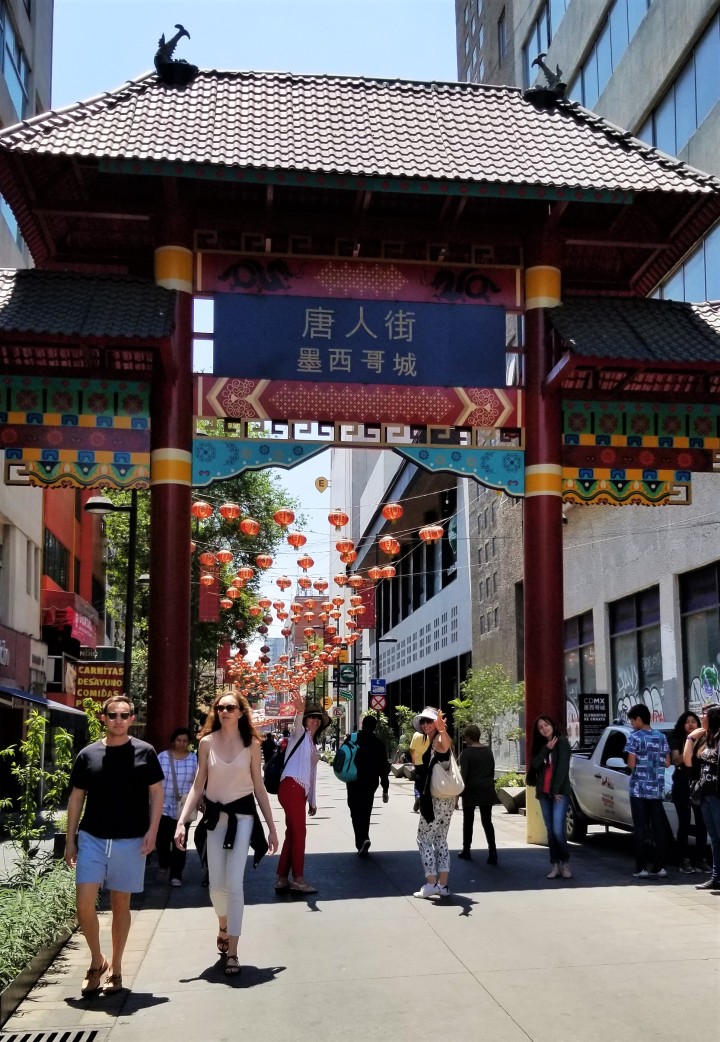 During a trip to Mexico City last year, I had a chance to drop by its Chinatown with two of my high school friends.  From my childhood, I remembered it as just a short strip of small Chinese restaurants and a couple of stores, on a dirty dead-end street that gave it its name back then: “El Callejón de Dolores”, off Francisco I. Madero Avenue, in the historic center of Mexico City. I was very pleasantly surprised to see that now it was clean, closed to motor vehicles (at least on that Sunday afternoon), and even had its own entrance iron gate (pictured above).

Walking through it, and down the narrow street, my friends and I found ourselves under a wonderful display of Chinese umbrellas, lanterns, and red banners, with restaurants, grocers and curio stores set up on either side: 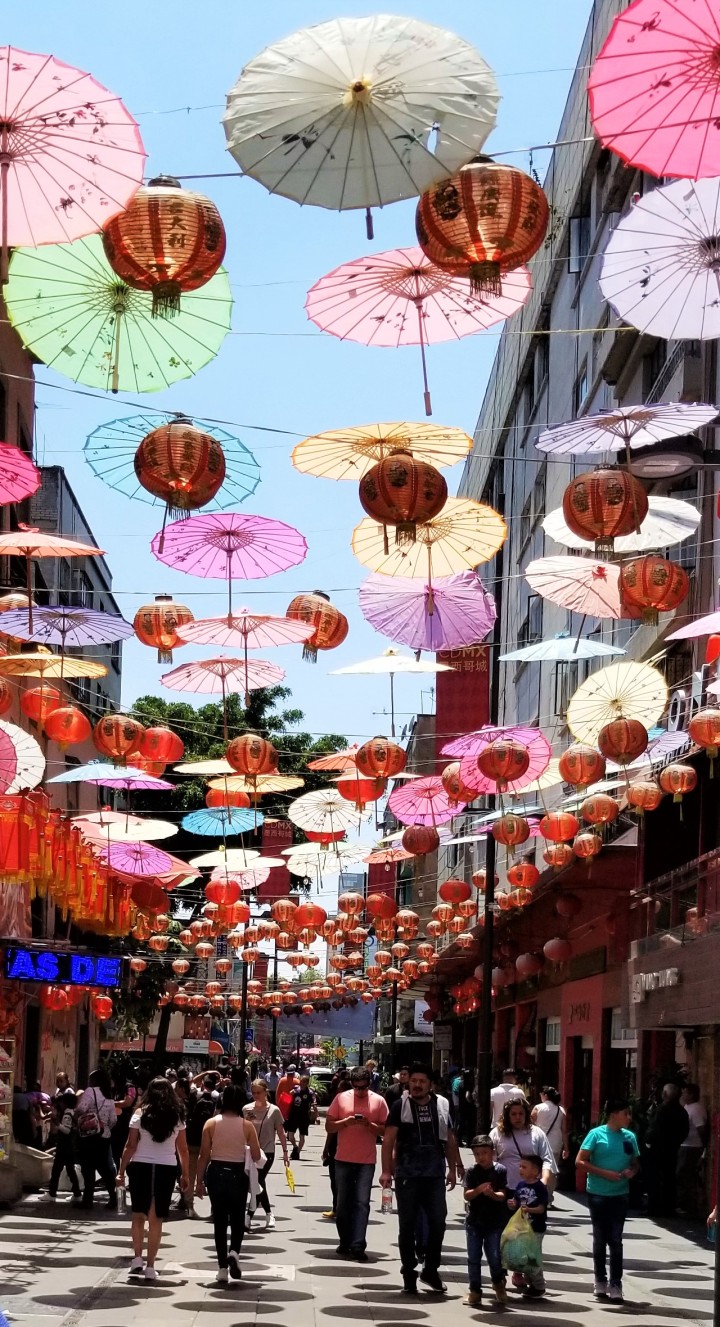 Chinese and other Asian peoples were brought to the Americas early on in the 16th Century during Spanish colonization, but true voluntary immigration might be placed more around the late 1800s and early 1900s, when many were lured to California, teased by promises of fortune during the Gold Rush.  A short while later – probably when reality hit – many Chinese workers were hired to build the Transcontinental Railroad.  Continuing the trend, some crossed south of the border for opportunities to join other railroad projects in Northern Mexico.  By 1910, these jobs were dwindling, and the beginning of the Mexican Revolutionary War in November of that year brought violence and general uncertainty,  so many went back to China, while others grappled to integrate themselves under more hospitable conditions, finding jobs in other trades.  Those who made it to Mexico City congregated on and around Dolores Street, mostly opening businesses such as restaurants, bakeries, and the stereotypical laundry shops.  More peaceful times came to the country, but Asian communities continued to suffer persecution well into the 1930s and 1940s, victims of racist public opinion and political interests.  After that, descendants of Chinese immigrants dispersed and became integrated, with “El Callejón de Dolores” remaining as the nucleus of the Chinese community in Mexico City.  A major renovation and re-invention of the two-block long Chinatown began in 2008, with the addition of an arch on Articulo 123 street, just around the corner from Dolores street; in 2009, in addition to the traditional celebration of the Chinese New Year, the Mexico City government and the Chinese embassy held a number of culinary and cultural events.  More recently, looking to attract more local and international tourism, the gate pictured at the top of this post was inaugurated in 2018.

While visiting Chinatowns or other ethnic-inspired neighbourhoods, people often comment on how they felt transported to the country the place represented, but in Mexico City, Chinatown is a mix of colonial Spanish and contemporary architecture, signs with Latin alphabet letters and Chinese characters, and unique foodstuffs that may be Chinese with Mexican twists, or Mexican with an Asian flavour.  I remember my mom and I once bringing home a take out stir-fry from Dolores that had chayote squash and jícama root acting as substitutes for bamboo shoots and water chestnuts, respectively, because, back then, many Asian cuisine ingredients were not readily available in Mexico.

On the day I went with my friends, we saw several Chinese restaurants, stands offering rainbow coloured steamed buns, and other novelties; one establishment that caught my attention in particular, was a taco restaurant, with a bright yellow sign offering tacos and freshly prepared juices in two languages, and sporting a rotating vertical grill for authentic Mexican shepherd’s style tacos – tacos al pastor:

This story has really made me hungry for a fusion stir-fry (just any Chinese recipe, but with chayote and jícama, of course), and if tacos al pastor may be found at the heart of a Chinatown, maybe it is time for me to finally attempt to make my own here in Canada.