Types of pottery in Mexico are numerous, many of them traced back to pre-Colombian times, when pieces were made for ceremonial, ornamental and utilitarian uses.  Most ceramic wares were polished and painted, not glazed; the potter’s wheel was unknown, so all pieces were shaped by moulding, roiling, or scoring by hand.  After the arrival of the Spaniards, European craftsmen were brought to Mexico to establish workshops with their methods, and nowadays, unique regional techniques and designs are the result of the amalgamation of European and indigenous components, and the characteristics of local materials such as sand and clay, as well as pigments.  One of the best known types of Mexican ceramic, which has been preserved over the centuries, is Talavera, based on techniques from the Spanish town of the same name, Talavera de la Reina, in Castile.

Talavera ceramic is a type of Majolica pottery, and the process has remained practically unchanged since its introduction to the Iberian peninsula by the Moors near the end of the twelfth century.  In very general terms, an underglaze is applied to pre-fired pieces, forming a light-coloured and somewhat opaque surface, which becomes the canvas for artisans to paint their designs.  A final coat of clear glaze is sometimes applied, and the piece is fired again.

When the technique was brought to Mexico from Spain in the sixteenth century, Puebla was the second largest colonial development, after Mexico City, and was the perfect location for ceramic workshops due to its unique regional clays, extracted from the mines nearby.  The regional black clay is ideal for pottery due to its malleability, while its white clay withstands the high heat of the kiln.  By the end of that century, Puebla had become the most important Talavera centre in the New Spain, with exports to the rest of the colonies, including Guatemala, Colombia, Cuba, Santo Domingo and Peru.  The period known as the “Golden Age of Talavera” reached its peak in 1650 and continued well into the next century.  Many workshops appeared and timely regulations, guilds and quality standards were established, covering directions from the beginning of the process to the end. as well as classifications of what should be considered imitations and what would be considered of fine quality, moderately fine, or daily use.    Authentic Talavera Poblana (from Puebla) must be created from the regional black and white clays, mixed in equal parts, purified and processed to obtain optimum plasticity for moulding.  The pieces are always shaped using a potter’s wheel or moulds (but liquid casting is not allowed).  The pieces are fired for several hours, followed by the enamelling of the pieces (underglaze), which is generally done by immersion, and must produce a creamy, off-white colour.  The designs then painted on this surface, were originally replicas of Spanish motifs, primarily made for churches and important buildings, but as European craftsmen taught local artisans, indigenous interpretations became part of the decorations, including plants and animals, and other native themes.   Only six mineral pigments and their possible combinations are used, with traditional formulations for: blue, yellow, black, green, orange and mauve.  The finishing step is the second baking, once the pieces have been decorated.

Over time, numerous artisans in Puebla and other states, such as neighbouring Tlaxcala and as far as Guanajuato, adopted the technique.  Standards and quality became hard to regulate, and high costs for traditional Talavera caused many workshops to opt for cheaper, or mass-produced processes.  In 1993, Talavera obtained the fourth denomination of origin (DO4) in Mexico; that year, only workshops and artisans located in the State of Puebla were included in the protection.  Later on, in 1997, those located in Tlaxcala were added, forming what is called the “Talavera Zone”.   There are less than ten shops DO4-certified, and “certified Talavera” pieces must bear the signature of the potter, the logo of the workshop, as well as the DO4 label and a special holographic sticker that certifies the piece’s authenticity.

In 2019, the processes of making the artisanal Talavera of Puebla and Tlaxcala (in Mexico) and ceramics of Talavera de la Reina and El Puente del Arzobispo (in Spain) were identified as part of the Intangible Cultural Heritage of Humanity by the UNESCO.

Last year, I had some time to spare at Mexico City’s International airport on my way back to Canada, so I dropped by the FONART store (Lic. Benito Juárez International Airport, Terminal 2).  FONART is Mexico’s National Foundation for the Development of Arts and Crafts, which was established by the Mexican Government in 1974 to “promote and protect traditional Mexican handcrafts.”  I bought the jar with lid pictured at the top of this post, which I gave to a dear friend here in Canada, and I also got a lovely plate for myself: 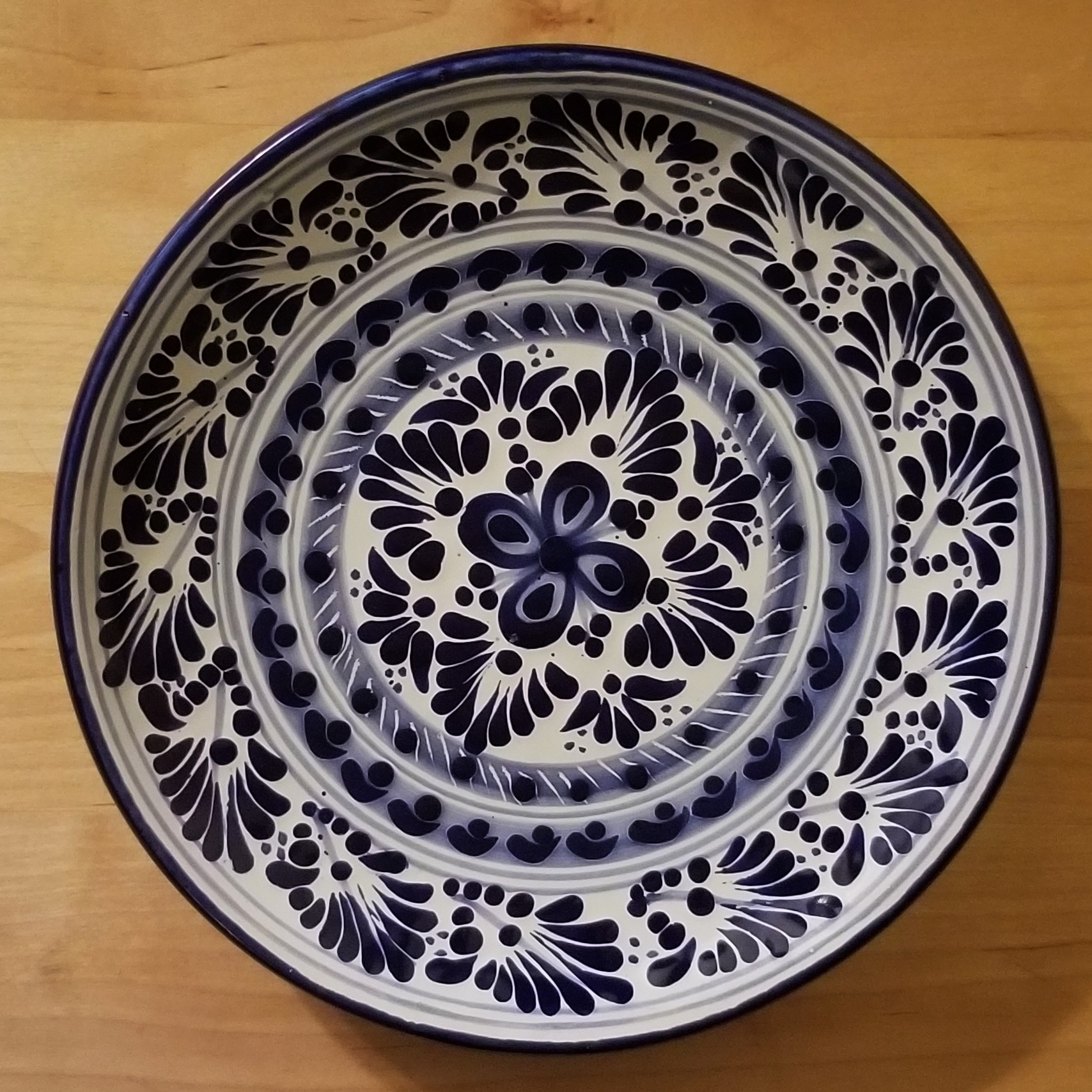 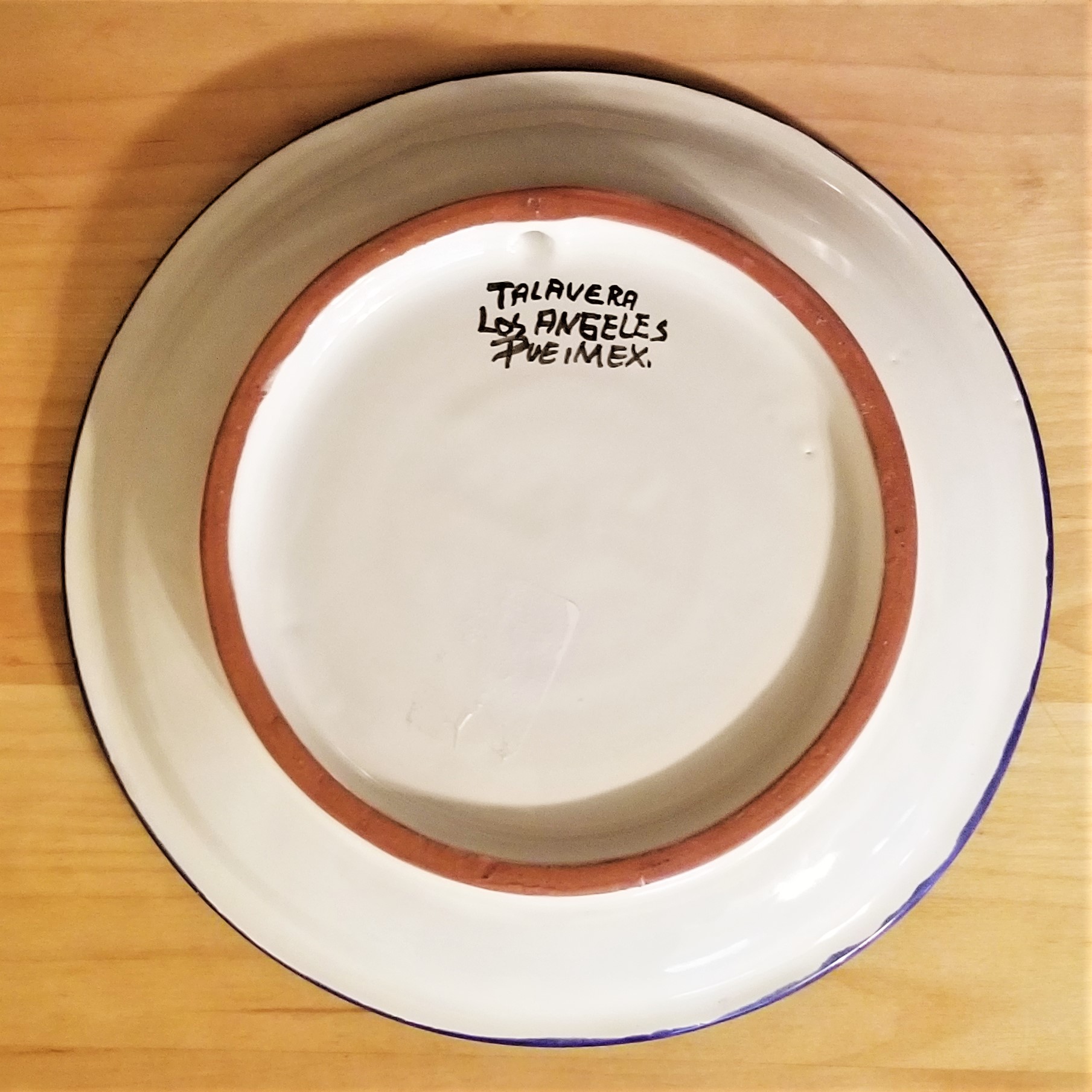 At that point, I was convinced I was acquiring authentic Talavera Poblana.   Later on, while reading materials for this post, I realized that my pieces lacked the “signature of the potter, the logo of the workshop, as well as the DO4 label and a special holographic sticker”.   So … they are not certified Talavera, but being from the FONART store, a Government institution which “promotes and protects traditional Mexican handcrafts”, and having the Talavera inscription on the back, I think there is still some merit to the pieces.

Moreover, they sport a creamy off-white background, include only specified colours, even the most characteristic, cobalt blue, and adhere to traditional designs.  There are ongoing efforts by The Talavera Regulatory Council (CRT) to support workshops in Tlaxcala and Puebla already creating valuable Talavera-style pieces, but which might not have the resources or expertise to obtain DO4 certification.  After this entangled rumination, I concluded that, as far as I am concerned, I might have purchased “non-certified Talavera”, but the pieces still are true handcrafts, and who knows, I might have even supported one of those workshops.

Although this certification program is intended to protect the authenticity of the products under its seal, this case shows the other side of the story; the doleful reality is that many artisans making good quality and valuable contributions cannot get the certification simply because their workshops are outside the “Talavera Zone”, a notable example being the state of Guanajuato; an interesting article in The Vallarta Times, points out that workshops in this state, and more specifically in the town of Dolores Hidalgo, have been creating (and naming as so) some of the best Talavera ceramic for centuries, certainly way before the DO4 status was granted to Puebla (and later, Tlaxcala).

As a curious anecdote, a quote from the same article: “Highlighting an interesting twist in the back-story, Padre Miguel Hidalgo, the ‘Father of the Mexican War of Independence’ himself, had a clandestine pottery business in Dolores [“Hidalgo” was added later to the town’s name, in his honour] before the start of the war [in 1810], when the Spanish authorities did not allow the local making of pottery. Its closing by the colonial government and other economic oppressions, were some of the reasons he and his parishioners started the rebellion.”  Although there are no references or fact checks for this claim, he was well educated and indeed promoted several trades: in addition to establishing a pottery workshop, he made contributions to the improvement of grape and silk worm cultivation, curing processes for leather, and beekeeping.

9 thoughts on “Talavera – From Spain to Puebla, and Beyond”