This is really a Christmas story but, since I mentioned Michael Bublé and his cover of the song “Baby, It’s Cold Outside” last time – and there is a chance of snow in the frigid weather forecast this week – I guess it’s still timely to explain why I thought of him.  When I was a kid, my dad played Bing Crosby’s “Merry (White) Christmas” LP album continuously for the two weeks prior to Christmas day.  I really did not mind it; it was just nice background music while doing homework, or baking cookies and Christmas treats (and Bing Crosby remained cool to me also because he sang a duet with David Bowie once).  In the updated version in this Millennium, my daughters and I like to bake and cook Christmas treats while listening to the Canadian – and also cool – equivalent: Michael Bublé.  I thought of all this as a free association of ideas between cold days and comfort food, such as my mom’s lentil soup with chorizo sausage:

“Rinse and drain lentils, remove pebbles or damaged pieces. Put in a large pan and fill with water to cover lentils.  Bring to boil, reduce to simmer and cook covered, until soft, about 20 minutes; drain, reserving two cups of liquid … ”  Full disclosure: I did not have dry lentils at hand, so instead of the previous steps, I opened two cans of lentils, which measured about 3 cups without liquid; I just used 2 cups of water instead of reserved liquid, since there was not much in the cans.  What I did have in the fridge was a package of Mexican chorizo:

Some supermarkets and meat stores carry fresh chorizo sausage, as well.  If there is none available, hot Italian or polish sausage may be used, although chorizo should be the first choice.  There are Portuguese and Filipino chorizos but their seasonings are not suitable for this Mexican soup.  Also, there are cured versions, usually from Spain, but those are mostly eaten as cold cuts or tapas (botanas/snacks/appetizers).  I took the chorizo out of the casing into a frying pan, and cooked it while cutting into bite size pieces with a spatula.  I stirred, until fully cooked and crispy, and let it cool a little before draining the fat.

I prepared the rest of the ingredients: just one strip of bacon, for flavour, sliced into squares; and some onions, carrots and green beans:

In a large pot, I fried the bacon pieces until translucent; I added the onions, cooked for a couple of minutes; then added the chopped carrots:

After another couple minutes, I added the green beans and stirred all together.  I incorporated the cooked lentils, mixing with all the veggies.

Next, I poured tomato sauce in (I usually make my own, and I had some leftover in the fridge, but again, out of a can works great) stirring, to let the tomato get some of the flavour from the fried bacon and veggies.  I added some water and continued stirring and scraping any bits from the bottom of the pot.  I poured the “reserved liquid from the lentils” (AKA water in this case), brought everything to a boil, then reduced the heat and simmered for about 20 minutes, until the carrots were tender.

To finish, I adjusted the seasoning with salt and pepper, but just a little because the chorizo is both salty and spicy.  I served my bowls of soup topped with chorizo and a sprinkle of cilantro, and lime quarters on the side.

Another confession: my mom would not use bacon or fry the veggies, but I think it tastes great!  To compensate, although most recipes call for frying the chorizo in the soup pot with the bacon, my mom always fried the chorizo separately and served it as a topping, and I have kept her style so the fat rendered by the chorizo can be discarded.  As a huge bonus, by doing this, the delicious texture and flavour of the crispy chorizo really stands out when the soup is enjoyed at the table. 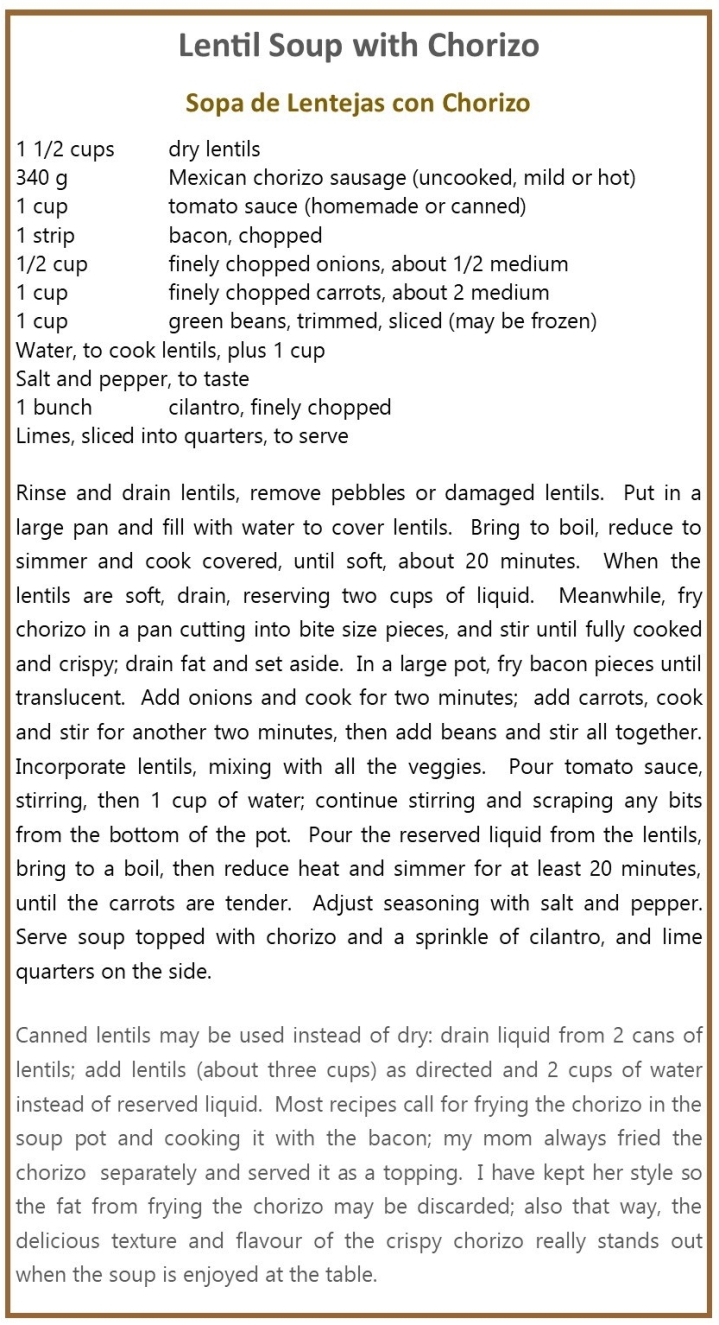 One thought on “Lentil Soup with Chorizo Sausage”