Recap from last post:  Between December 1861 and January 1862, the Spanish, British and French governments had form a tripartite alliance to demand debt payment from the Mexican government of Benito Juárez, and had landed troops in the Mexican port of Veracruz.  The American Civil War was taking its toll, and the Hispanic and anti-slavery groups in the Southern states were particularly vulnerable.  Napoleon III of France wanted to invade Mexico and aid the Confederates win the American Civil War.

The tripartite alliance fell apart by early April 1862, when it became clear the French wanted to impose harsh demands on Mexico to provoke a war.  Napoleon III wanted to take Mexico City and set up a government under his power.  The British and Spanish armies left, but the French marched towards Mexico City through the state of Puebla.  General Ignacio Zaragoza, the young commander of the Mexican army, had retreated to the city of Puebla from Acultzingo (see map below).   The city was heavily fortified, with the forts of Loreto and Guadalupe on opposite hilltops to the North.  The French army entered the battlefield from there, finding themselves surrounded by Mexican troops on either side; in a matter of hours, over 400 French soldiers had been killed, and they were forced to retreat.

The Battle of Puebla was an inspirational event for Mexico, after its own Reform war and previous defeats against the French.  Juárez and his allies recognized the importance of the victory in Puebla as a boost to the morale of the Mexican troops; just a few days after the battle, he declared Cinco de Mayo a holiday.

Mexican historians (such as Justo Sierra, in his “Evolución Política del Pueblo Mexicano”) and American sources (such as the Loyal Legion Historical Journal) agree that if this battle had been lost, the French forces would have occupied Mexico City shortly after, then being in a strategic and advantageous position to aid the confederate artillery with French weapons and ammunition; this would have possibly ” … set the stage for the victory needed by the Confederate States of America to gain diplomatic recognition by the European Powers and the military support that this implied.” [1]  The defeat brought hope to the pro-Union Hispanic communities, especially in California.  By the time the French had regrouped, eventually taking Mexico a year later, the American Union had built a strong army that defeated the Confederates at Gettysburg, just 14 months after the battle of Puebla.  The “Cinco de Mayo Battle of Puebla” also gave Mexico recognition from the rest of the world, which expected a quick victory for France.  (Next post: Third Stop Coahuila)

My second culinary stop is the Mexican state of Puebla, which was recently included as one of the top 10 coolest cities to visit in the world, by the Forbes magazine [2] for its impressive colonial architecture and, as I have mentioned before, for being the cradle of one of the finest Mexican cuisines.  Poblano is the demonym (word of the day April 23, 2018) for the city and the state, like their shiny Poblano peppers, dark red Mole Poblano, and the stew I am featuring today: Tinga Poblana.

Beef and Chorizo Stew with Chipotle

In a large pot, fry chorizo, slicing into bite size pieces with a spatula.  Remove chorizo onto a plate and reserve:

Drain fat, leaving about 1 teaspoon in the pot; add onions and sauté over medium heat until translucent.  In a small bowl, mix garlic with herbs and 1 tablespoon of liquid from the beef, then pour into the pot with the onions; stir and mix all the aromatics together for about 30 seconds:

Add about ¼ cup of the reserved beef liquid, scrape the bottom of the pot with a spatula or wooden spoon.  Add diced tomatoes with their juice, and continue cooking and stirring for a couple of minutes:

Pour in ¼ cup of the sauce from the canned chipotles, the shredded beef, the rest of the reserved liquid, and the chorizo; stir and let simmer on low heat, partially covered for 10 minutes:

Serve hot with chipotle peppers on the side, and warm tortillas. Tinga Poblana is also used frequently as a filling for quesadillas, or empanadas. 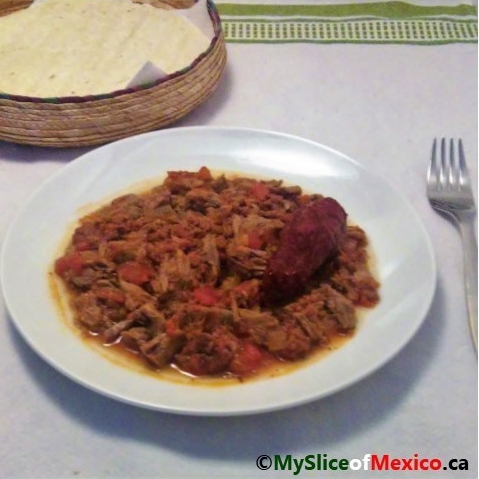 I am also joining Fiesta Friday #273 with Angie @ Fiesta Friday, this week co-hosting with Mollie @ The Frugal Hausfrau.

I am sharing my recipe at What’s for Dinner? Sunday Link-up # 198, graciously hosted by Helen @ The Lazy Gastronome.

9 thoughts on “– A Themed Menu for this Cinco de Mayo – Second Stop: Puebla”