I had never eaten chives until I came to Canada, ordered a baked potato at Wendy’s™, and was confronted with the “want sour cream and chives?” question.  A few years later, I realized that they were very easy to grow, thanks to the potted chives that one of my daughters crafted at school for Mother’s Day when she was in Kindergarten (a little tear here – thank you Mrs. R.!)  Admitting to be way behind the curve, I learned that their pale purple flowers are edible just a couple of years ago, when I grew my first crop, and started sprinkling them not only over baked potatoes, but also omelettes, quiches and salads.  I recently asked a few friends and relatives in Mexico if they knew this vegetable, and also did a Google search, and it turns out that nowadays chives (Allium schoenoprasum) are indeed known and used in Mexico, grown in pots, even as ornamentals, and are called “cebollines.”

However, cebollines, the plural form of cebollín, is a generic word, meaning “tiny onions”, and I found it is also used for other vegetables in the onion (Allium) family that have green leaves and look similar to chives.  For example, garlic chives (Allium tuberosum), also called Chinese chives, which have flat leaves, and a mild garlic flavour:

Cebollines could also be scallions (Allium fistulosum), the true no-bulb onion, cultivated mostly for its green leaves, a staple in Japanese cuisine:

The biggest surprise was to learn that there are some varieties of cebollines native to Mexico, belonging to Allium glandulosum, practically growing all over the country, as well as some varieties that are similar to Chinese chives, found wild and in cultivated forms in the Yucatán (Maya) peninsula.  Moreover, in The history of Mexico: Collected from Spanish and Mexican Historians, Volume 1, it is stated that:

“Onions were sold in the markets of Mexico, as Cortez mentions in his letters to Charles V, so that there was no necessity for importing them from Europe … the name Xonacatl, which is given to the onion, let[s] us understand that this plant was very ancient in this country, and never transplanted there from Europe.”

Similar ancient references to onions place the Allium family in Asia, ancient Egypt and other African regions, Greece, and the Middle East.  Many botanists believe that different species of Allium developed independently all around the world, considering their distinct characteristics, and the fact that they can be found in the wild, making it a true cosmopolitan vegetable.

I always thought onions arrived in the Americas from the Old World with the Spaniards, but since they were sold in Mexican (Aztec) ancient markets, and have a Nahuatl name, it is probably fair to assume that many recipes for salsa, guacamole, and stews from pre-Hispanic times had Xonacatl (onions) on their ingredient lists.  No wonder cebollines and onions taste so good in Mexican dishes!  I use chives chopped, mostly raw, since they lose their flavour when cooked for long; I have sprinkled them over nachos, and mixed in a pico de gallo salsa in addition to the white onions.  Chinese chives are the closest to Mexican varieties, so I would add them to Mexican stews or cooked salsas, such as my green cooked sauce.  Scallions and  green onions become a classic Mexican side dish for a good piece of steak when cooked on the grill until well charred, served with tortillas, halved limes and salt.  In the photo below, chunks of sirloin steak, green pepper and white onion on a skewer, known as “alambre” (“wire”) are cooked with a bunch of scallions: 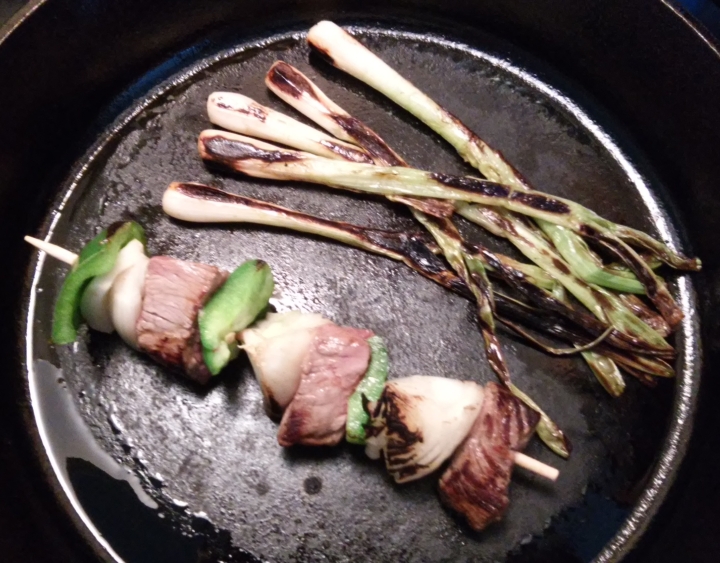 2 thoughts on “Onions – A Cosmopolitan Family”