Mostly as a follow-up of my posts on cacti and their edible fruit, I thought of posting about the fruit of the paddle cactus (Opuntia ficus-indica), known as prickly pear or cactus pear (pictured above).  I found the dark one at the supermarket, and then a couple of days later, I saw the light green ones at an International market.  The title of the post might seem confusing, but it is all about the name for prickly pears in Spanish, which happens to be a homonym of the English name for the well known fish.  Tuna, the name of the fruit, comes directly from Caribbean Taino languages, and was adopted into Spanish during Mexico’s early colonial times (1500s).  In reference to the fish, the evolution of the English word “tuna” started with the Greek name thynnos – rush, dart along, probably from how the fish moved; then Latin – thunnus, to Arabic – tūn, and finally, “tuna” in English and in Spanish – atún, curiously enough, an anagram of the English word!

The spines had already been removed from the tunas (cactus spines, not fish spines!), so all I had to do was to wash them, use a paring knife to remove the edges and score sections of the skin, and then peel them off from one edge, like a banana: 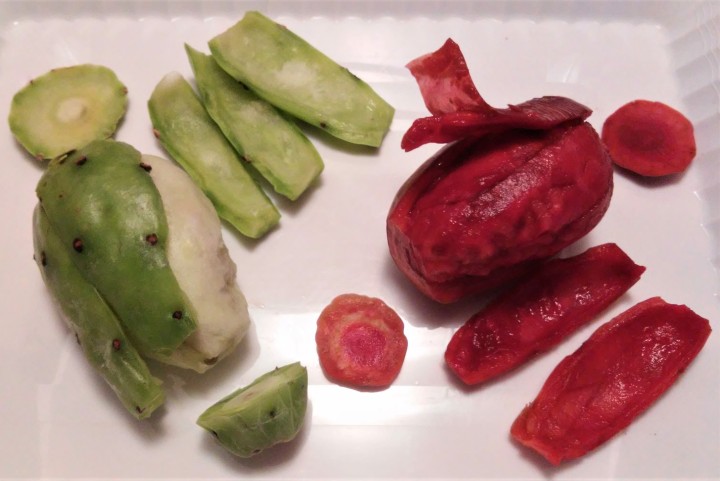 Once peeled, I sliced them and chopped some into smaller, bite-size pieces: 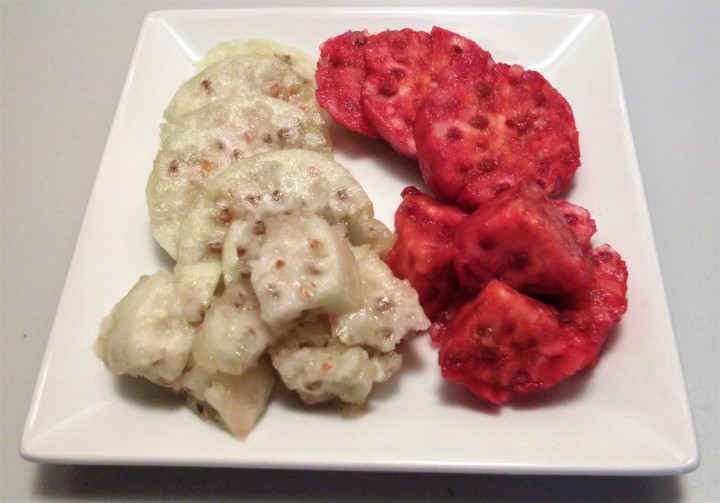 The only challenge was not to bite into the many hard seeds (a lot like eating pomegranate), but it was well worth the effort, to enjoy the sweet and unique flavour. My husband and I could not decide which one was better; both were juicy, sweet and refreshing, yet each had its own special notes of … Watermelon? Pear? Dragon fruit? Or maybe all of the above, but there was definitely nothing fishy about them.

Please note that I will be away for a few days; I have scheduled a couple more posts (please visit!), but I will have very limited access to a computer, so I will catch up with any comments as soon as I get back.  Have a great week!

4 thoughts on “Tunas – Nothing Fishy About These”