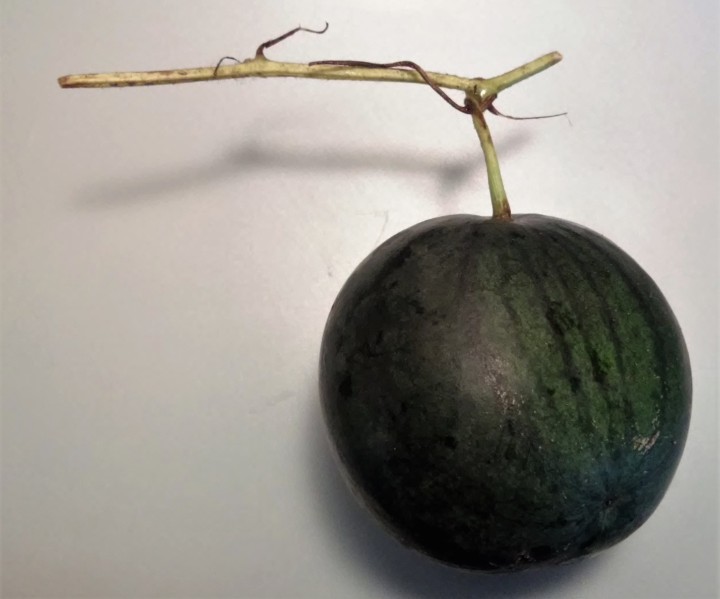 This week started with well above-average temperatures in Southern Ontario, but today we are back to more seasonal weather.  I went around the backyard to assess whatever was left of my crops.  Since I sowed my cucumber seeds in mid-June this year – very late for my area – I did not see any cucumbers growing until the end of August (photo below, left); nevertheless, the vines looked very healthy later on and throughout the rest of the summer (photo below, middle).  Some plants have dried out by now, but I am still getting the odd cucumber here and there, growing on the surviving vines (photo below, right):

I have had plenty of serrano peppers this year, and the plants still have lots of fruit on them; some are starting to turn red (photo below, left), so it is time to pull the plants and bring the branches holding peppers inside; those should keep for a couple of weeks on the counter to use fresh, and after that, I will freeze them to use in stews throughout winter.  On the other hand, I have harvested exactly zero eggplants this year, but the tiny guy in the photo below, right, seems determined to come to fruition, so I will let it grow for a few more days, as long as the temperature stays above freezing:

Both the tomato (below, left) and tomatillo (right) plants are yellowing, so the fruit has to be harvested to let it mature indoors; the dying plants will go to the compost pile:

The stellar crop this time is my Sugar Baby watermelon (one featured at the top of the post).  I had always been on the fence about growing my own watermelons – I thought it could be fun, but probably too much work – until I chose a watermelon slice for my blog’s logo; I figured now I had to try it at least once.  Back in March, I briefly mentioned the watermelon seeds I had purchased (photo below, left), and also published a “seed to table” page, with details.  I sowed a couple of seeds in pots indoors in mid-April, and transplanted them to the ground in late May, but then I was away for a few days (watching herds of cute sheep in Iceland, amongst other things), so I did not know how the neglect was going to affect their growth.  I think shortage of water was the main issue, but two seedlings were still alive in mid-June (photo below, middle); they grew into vines but with only one fruit each, by the second week of July (right):

Sugar babies are a variety of small watermelons, catering to colder climates with a short growing season; the fruit may grow to up to 8 inches in diameter, and they are supposed to reach maturity in only 75 days.  The cues to harvest are the characteristic pale spot developing on the side that is in contact with the ground, and a few dry leaves close to the fruit; my two tiny watermelons showed just a slight yellowing on the bottom side, but they had been growing for almost three months, and the vines were practically dead, so I saw no point in waiting any longer.  The green leaves in the photo below (left) are just overgrown weeds; the watermelon is attached to the pale vine, with a dry leaf showing at the bottom.  The photo on the right shows the dry stem and slightly pale bottom of the second watermelon (the featured one also shows the stem and part of the vine, both dry):

I sliced one in half; it was only about four and a quarter inches in diameter, but it opened with a clean split once I pierced it with the knife, and the flesh looked very juicy and crisp:

I was so happy when I tasted a bit and was rewarded with a distinctive, sweet and refreshing watermelon flavour.  I used a melon scoop to prepare a pretty bowl; it was so good! One more taste of homegrown goodness:

The other half was prepared similarly and reserved for my husband; he thought I had purchased it somewhere, puzzled by the nice watermelon this late in the season.  He was very surprised when I told him it was from our own backyard!  I was pleasantly surprised, too, and although I only got two small watermelons, it was a rewarding first experience with this crop; I will definitely try growing watermelons again, having all winter long to think of ways to improve the yield next year.

I was figuratively speaking for myself, but I spotted this squirrel literally “on the fence” this morning: 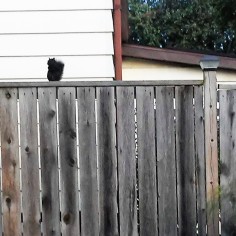 12 thoughts on “An Autumnal Slice of Life”