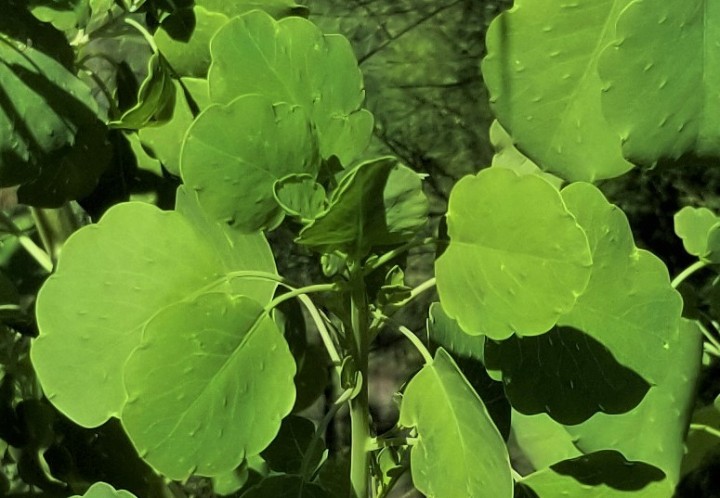 Back in February, I shared a post about three packages with Mexican heirloom seeds, from left to right, Cempasúchil (Tagetes erecta) , “flor de muertos” – the flower for Day of the Dead offerings, known in English as Aztec Marigold; Chile Chiltepín (Capsicum annuum ‘Chiltepin’) , also known as tepín or Bird Pepper; and Pápalo (Porophyllum ruderale ssp. macrocephalum), a potherb with a unique flavour and scent:

All three were new-to-me crops, so I started seeds indoors for better control.  They all had produced very healthy sprouts by April.  In the photos below, from left to right, several Cempasúchil seedlings in a pot, Chile Chiltepín growing individually in paper cups, and tall and green Pápalo stems:

A late cold spell at the end of May damaged the recently transplanted seedlings, as seen below in pictures from May 28, 2021, from left to right, discoloured Cempasúchil, droopy Chile Chiltepín, and almost bare and browning Pápalo:

I thought this inclement weather was going to be lethal to my plants, leaving no vestige of them, but fortunately, although hot at times, summer proved to be kind, with sunny days alternating with generous rain.  This is how my three new crops are doing now:

From looking at a close-up (photo below, left), it is easy to understand why Aztec marigolds were called cempasúchil, a Nahuatl word which means  “twenty flowers”; their dense petal growth is also the reason for the name of “Mexican carnation” (although, in spite of their resemblance, they are not botanically related to carnations – Dianthus caryophyllus).   In the photo below, right, the very same plants that were struggling to survive, are now a very prolific and healthy conglomerate  of blooming plants:

I had to find a bloom in a shady spot for the close-up, because they are so bright in the sun, they seem to be sparkling.  I think they are at their peak right now, so I hope they will still be around in early November, and I can include them in my Day of the Day offerings.

The pepper plants recovered, but have been growing slowly compared to the other varieties in my garden.  My jalapeños and serranos have been either harvested, or are turning red, but the chiltepín plants are still blooming, as some peppers grow:

The stems are full with little green gems:

They will not grow more beyond one centimetre (about half an inch), and when growing in the wild, chiltepín peppers are just pea-sized, and more round (photo below, left); these peppers have grown in the wild in Mexico and Southern United States since as far back as 10, 000 BC.  They may be harvested fully ripened, usually left to dry, or picked while green, then eaten raw, pickled, or added to stews or rice (photo below, right):

Finally, and against all odds, the pápalo stems survived, and once transplanted to the ground, developed into tall and almost bushy plants (the fence is 6 feet tall, as a reference):

As seen in the photo below, this herb has beautiful wide leaves, with a well-marked midrib, hence the Nahuatl name papalotl, meaning “butterfly”; this herb is native to Mexico and used in several Latin American countries, where it is also known as Quilquiña, Yerba Porosa, Killi, and Pápalo quelite:

Pápalo plants love hot weather, so there is not much time left for them here in Southern Ontario, as the fall season has officially arrived in the Northern Hemisphere.  I will have to cook something soon, to condiment with pápalo; cemita sandwiches, along with suadero tacos, are the most popular uses for pápalo.  I have previously shared some background and my recipes for cemita sandwiches, as well as suadero con longaniza (click on highlighted text to visit those posts), but maybe I will revisit with some variations; stay tuned for more on this.