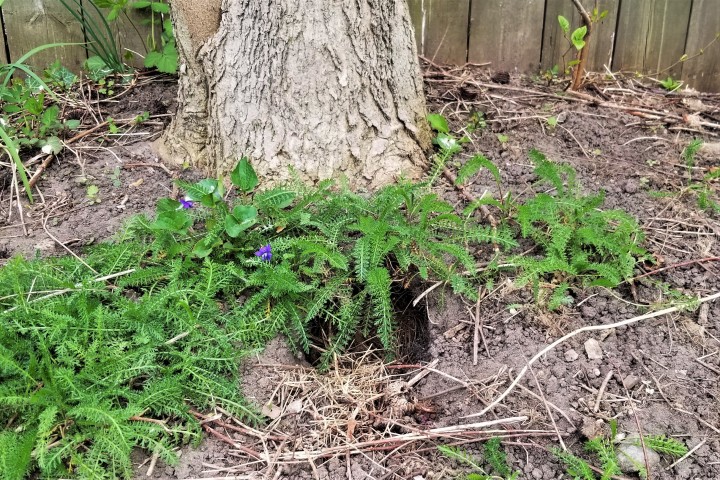 I spotted the rabbit hole in my garden, at the root of a tree, as seen above; it looked so proper and cute, framed with yarrow and a few volunteer violets, and I immediately thought of the beloved Beatrix Potter’s story “The Tale of Peter Rabbit”:

Once upon a time, there were four little Rabbits, and their names were — Flopsy, Mopsy, Cotton-tail, and Peter. They lived with their Mother in a sand-bank, underneath the root of a very big fir tree.  “Now, my dears,” said old Mrs. Rabbit one morning, “you may go into the fields or down the lane, but don’t go into Mr. McGregor’s garden: your father had an accident there; he was put in a pie by Mrs. McGregor.”

For a second, I was expecting to see one of the rabbits pop out of the hole wearing a blue jacket.  Then of course, I realized that they would be causing havoc in my vegetable garden if left to their own devices, as Peter did: “First he ate some lettuces and some French beans; and then he ate some radishes.  And then, feeling rather sick, he went to look for some parsley …”  Now, I am not much of a Mrs. McGregor, so I would never commit the iniquity of putting any of them in a pie as a rebate for their veggie thefts.  Instead, I decided to protect my new plantings with chicken wire, to prevent the whole crime from being perpetrated in the first place.  In the photos below, a couple of radishes (left) and carrots (right) may be seen safely sprouting under the wire, a beam of hope for the survival of my plantings: