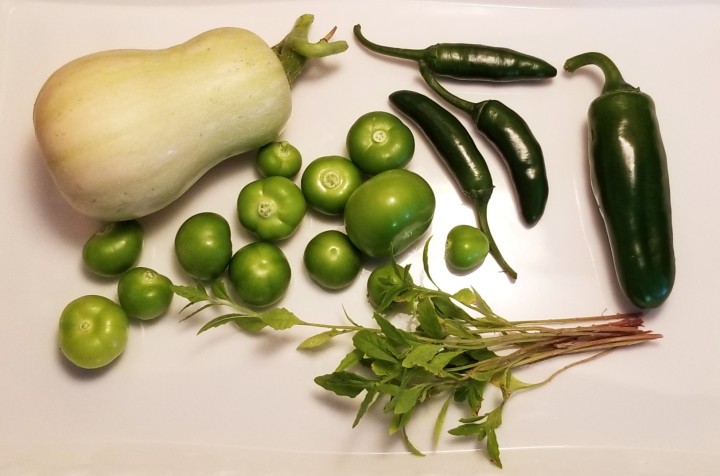 A cool month of June, followed by extreme temperature changes, up and down, caused slow growth in many of my vegetables, and strange development in others.

For the cucurbits, the plants and vines stayed small for the whole month of June, then when we had a heat wave, started producing male flowers prematurely.  My zucchini plants then just wilted (photo below, left) without producing a single female flower.  My cucumber vines looked healthy, but did not start producing actual cucumbers until mid-September, and now that the temperatures are dropping, the tiny fruits, still attached to bright yellow flowers, in some cases (photo below, right) will not have time to grow before the first frost:

The winter squash did not perform any better; from three vines, only one butternut squash was produced, and as seen below, it is quite small and still green:

The nightshades started slow, as well, recovered in general, and then some remained small, while others thrived.  Tomatillos for example, looked very healthy on the plant (photo below, left), but the actual fruits were very small inside their husks (photo below, right):

Peppers, on the other hand, are doing great, with lots of good-sized peppers, and in decent quantities, and seen in the photos below, left, for serranos, and right, for jalapeños:

Finally, herbs did well, but are mostly yellowing and going to seed now, such as my epazote, as seen below:

So my still-life from this harvest includes one green butternut squash, some serrano and jalapeño hot peppers, about half a pound of small tomatillos, and a modest bunch of epazote:

It is time to get creative with my next recipe; stay tuned to see what comes out of this piece of edible art.

I am joining Cee’s Flower of the Day (FOTD) Challenge for October 8, 2022.  Names of my flowers in this post do not begin with the letter Y but some are bright yellow!