This soup is a good way to use up any veggies in the kitchen or from the garden. The legume and veggie combo makes this comforting soup a very nutritious meal, while gaging to keep the recipe vegan ... click on title for more

Aguachile is a dish of shrimp partially cooked in lime juice, then mixed with veggies. Since I am allergic to crustaceans (lobster, crab, shrimp), and inspired by my previous post, I thought of making a batch of shrimp-less aguachile using shirataki noodles (konjac) ... click on title for more

To make good use of a nice crop of pápalo before the cold weather kills the plants, and inspired by National Taco Day and Fried "Chiles Toreados" with Onions in previous posts, I decided to re-visit my recipe for suadero tacos, one of the most iconic street offerings in Mexico City.  They are usually made with a special cut of beef (suadero), and a piece of pork sausage (longaniza) but, since my vegetarian daughter was visiting, a meatless batch was in order ... click on title for more 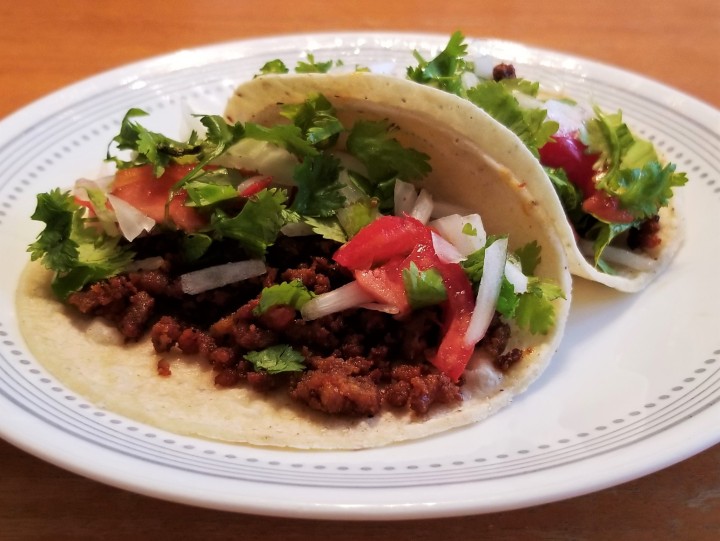 In Spain, chorizo is usually a fermented, cured, and smoked pork sausage, which may be sliced and eaten without cooking, traditionally seasoned with paprika and a blend of other spices.  Mexican chorizos are mostly fresh, or partially cured, and need to be cooked before eating. For Northern Mexico recipes, and most specifically for those from the state of Coahuila, the defining seasonings are ancho peppers and cumin; my mom used them as the basis for her chorizo recipe, and always kept it lean by omitting lard from the ingredient list.  I am following all her teachings for this recipe, and by omitting the lard, I was also able to develop a vegan option ... click on title for more

Fresh garden asparagus are a great way to enhance the bright green colour of cilantro, and tame its strong flavour. The soup has a thick consistency without the addition of cream, and it can be made vegan by choosing veggie broth. It is garnished with tortilla chips, so it is gluten free. Dairy and gluten free, vegan, pretty, and gourmet; what else could be possibly asked from a soup? ... click on image for more