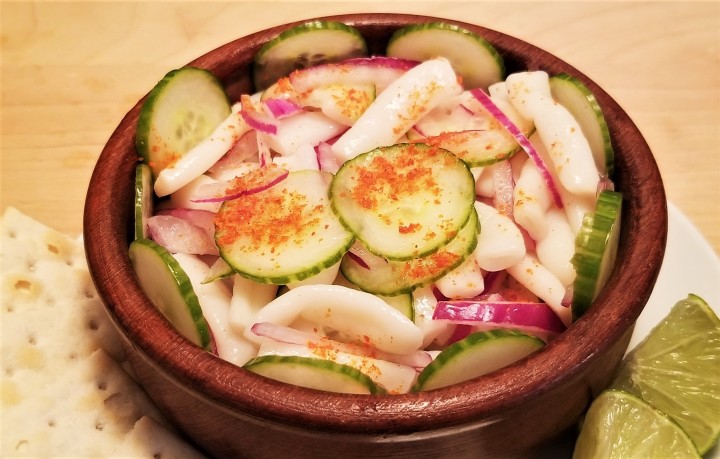 Aguachile is a dish of shrimp partially cooked in lime juice, then mixed with veggies; it is similar to ceviche, but as the name indicates – aguachile translates from Spanish as “hot pepper water” – the lime juice must always be seasoned with hot peppers (chiles).  The heart and soul of aguachile is in the basic ingredients of lime, coarse salt and either green or red hot peppers: 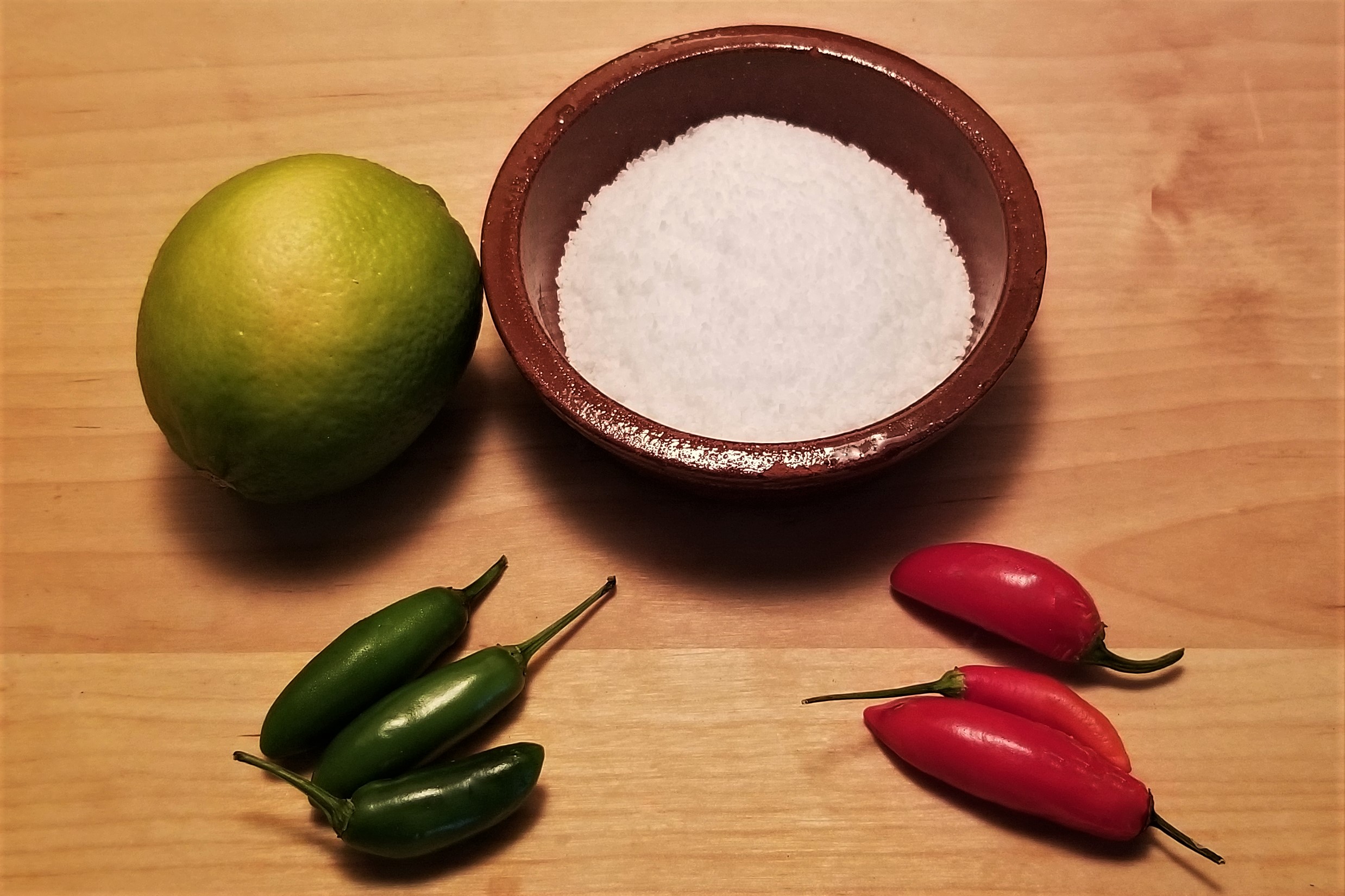 The green version (aguachile verde) usually calls for serrano peppers, while the red (aguachile rojo) could be made with ripe serranos, comapeños, chile de árbol, piquín, etc.  The “hot pepper water” is traditionally prepared by grinding and mixing the ingredients in a molcajete (Mexican mortar); peeled and cleaned raw shrimp are then added, to partially cook them with the lime juice, and the dish is finished by adding sliced red onions and cucumbers. Aguachile is often served in a molcajete, even though in many cases nowadays, the aguachile juice has been actually processed in a blender.

Although many people think that fear of consuming partially raw shrimp is unsubstantiated, it still might be of concern for some and, since I present the anomaly of being allergic to crustaceans (lobster, crab, shrimp), I thought of making a batch of shrimp-less aguachile using shirataki noodles (konjac), inspired by my previous post:

Their chewy texture makes them a good vegan substitute for seafood such as clams, abalone, or as in this case, shrimp; this substitution also eliminates the spuddling job of peeling, cleaning, and slicing raw shrimp.

And to simplify the recipe even more, I prepared my aguachile  juice with already ground red comapeño peppers*, saving myself the molcajete, or blender, step:

Ingredients (for one portion)

In a mixing bowl, add hot pepper powder and salt, then squeeze in the juice from one lime (photo below, left).  Mix thoroughly, to dissolve salt, and incorporate all flavours (photo below right):

The resulting red aguachile juice is now very similar to one prepared with a blender, or mortar and pestle (molcajete):

Add reserved shirataki noodles (in lieu of raw shrimp).  To finish the dish, set up with the rest of the ingredients:

Add sliced onions, sliced cucumber, and squeeze in the juice from a half lime on top, mixing all together:

Make sure to scoop some of the aguachile juice from the bottom of the bowl to coat veggies and noodles.  Adjust seasoning with more salt, if needed.  Serve with soda crackers (or tortilla chips), and the rest of the lime, cut into wedges:

I got forgetful and did not include the crackers in the chart below, but five soda crackers amount to approximately 70 calories (about the same as the whole bowl of vegan aguachile!):

* NOTE: I have mentioned the Boonville Barn Collective Company before.  It is based in California, growing peppers with organic and sustainable practices.  Although Piment d’Ville is their signature crop (a California-grown version of the Basque Piment d’Espelette), they also offer different varieties of dry chiles, such as the comapeño used in this recipe (which I purchased, and I am not receiving any remuneration for this review).  I have not tried it, but they also carry poblano pepper powder, which could provide for an interesting choice to make a no-blender aguachile verde.

I am bringing my recipe to Full Plate Thursday #560 with Miz Helen @ Miz Helen’s Country Cottage.

I am also sharing my recipe at What’s for Dinner? Sunday Link-Up #339 with Helen @ The Lazy Gastronome.