This March 17th will be, once again, the feast day of St. Patrick, patron saint of Ireland, the “Emerald Isle”[1]. Many people in Canada and the US will celebrate their Irish heritage with traditional Irish dishes and green foods, especially beverages (green beer!?)  Very timely, I just prepared two batches of salsa verde (Mexican green sauce) for my previous post, and I was thinking what dish to feature with them.  A classic taco to eat with green sauce is the crispy flauta (flute/recorder) named after its shape when a filled corn tortilla is rolled very tightly and fried, so that the taco resembles the musical instrument.  The filling can be chicken, beef, or a vegetarian option, such as mashed potatoes; after frying, the taco is topped with cream, onions, shredded cabbage, and cheese … which sounds a lot like a de-constructed Colcannon – that Irish dish with creamy mashed potatoes, and cabbage and onions – wonderful! With the two green sauces, if I could come up with a green beverage, I would complete a nice St. Patrick’s Day theme.  Now, I was not convinced about frying the tacos or adding food colouring to my beverages; I changed the shape from rolled tacos to folded quesadillas, which may be pan grilled instead of fried, and will also be less messy to eat; the green beverage will still be beer, but I thought of making a cilantro and lime natural dye instead, very fresh and green (works at many levels.)

The first step, of course, is to place the beer mugs in the freezer, at least 2 hours before meal time.  The beer bottles go in the fridge at this point; I chose Dos Equis™ Mexican beer because the bottles are a nice shade of green.  I saw Canada Dry™ ginger ale in old-fashioned green bottles when I was shopping, so I bought some to have a non-alcoholic option; these go in the fridge, as well.  The green dye for the drinks is concocted by processing a bunch of cilantro with lime juice in the blender, until perfectly liquefied; this preparation may be strained and poured into a jar with lid, and stored in the fridge until serving time.  I had a flashback to middle school, when my Biology teacher gave us the assignment of extracting chlorophyll from spinach leaves; by looking at this bright green colour, I was already feeling hopeful that my idea was going to work.

FYI:  A friend told me she has trouble using up her cilantro before it goes bad.  I always buy fresh bunches, not the pre-packaged herbs; I place the whole bunch in a half-full glass of water, as if it were a bouquet of flowers, then I cover the top loosely with a plastic bag, and keep it in the fridge (the door shelf is a good spot, not too cold, and less likely to spill).  In the photo right, I am holding a bunch I just brought from the supermarket, next to my “arrangement” from one week ago; I have kept some bunches for two weeks or so.

For the quesadillas, I had the two batches of my salsa verde, raw and cooked; if you can’t find the tomatillos in your area, a bottled green salsa, such as Herdez™ may be used:

Fresh jalapeño or serrano peppers, cabbage, green onions and potatoes were washed and dried.  I prepared a batch of firm mashed potatoes by peeling the potatoes, then boiling them in water until soft.  After draining the water, I smashed the potatoes in the pot, adding a pinch of salt; they should be firmer than regular mashed potatoes, so I did not add any dairy.   The peppers were seeded and sliced, and set aside; the cabbage and onions were sliced thinly.

One of the traditional Mexican cheeses for quesadillas is quesillo de Oaxaca (Oaxacan little cheese) which is very similar to the mozzarella cheese balls that can be unraveled like yarn (see photos); I prepared this cheese by doing so, cutting the strings about 2 inches long, and setting aside on a plate.  I like thick sour cream and my husband does not like it at all, so I serve it as an optional topping, always choosing a brand with no starch in their ingredient list.

Wheat-flour or corn tortillas may be used in this recipe; I chose corn tortillas to keep a connection to the original flauta idea, which always calls for corn tortillas.  Wheat flour tortillas are pliable out of the package, but for corn, I needed to add a touch of moisture with a sprinkle of water, and then I placed them on a plate, covered them loosely with a plastic dome and warmed them up in the micro-wave oven (fact: many Mexicans use this method at home or work instead of el comal, a traditional flat and smooth griddle on the stove). the photos below show two brands I have found at international markets in my area:

The warm tortillas are ready to be filled with potatoes, cheese, and chicken if using, and folded in half.  I used a paper towel dipped in vegetable oil to lightly grease an iron skillet (a comal or a large frying pan are other options); I grilled the quesadillas in batches, until the cheese melted, and the outside was just barely golden brown, about 3 minutes total, flipping halfway, being careful to remove them before they got stiff; I kept them wrapped in a clean kitchen towel.

After setting the table with the frosted beer mugs, cold drinks, natural green dye and a couple of spoons for mixing, I also set the sliced jalapeños, sour cream and green sauces at the table. The quesadillas were topped with cabbage and onions, plated and served immediately.  The beer was a refreshing surprise; the flavour turned out even better than the colour.  The cilantro/lime dye also worked great with the ginger ale, maybe next year I will market it as a health product  ¡Feliz día de San Patricio! 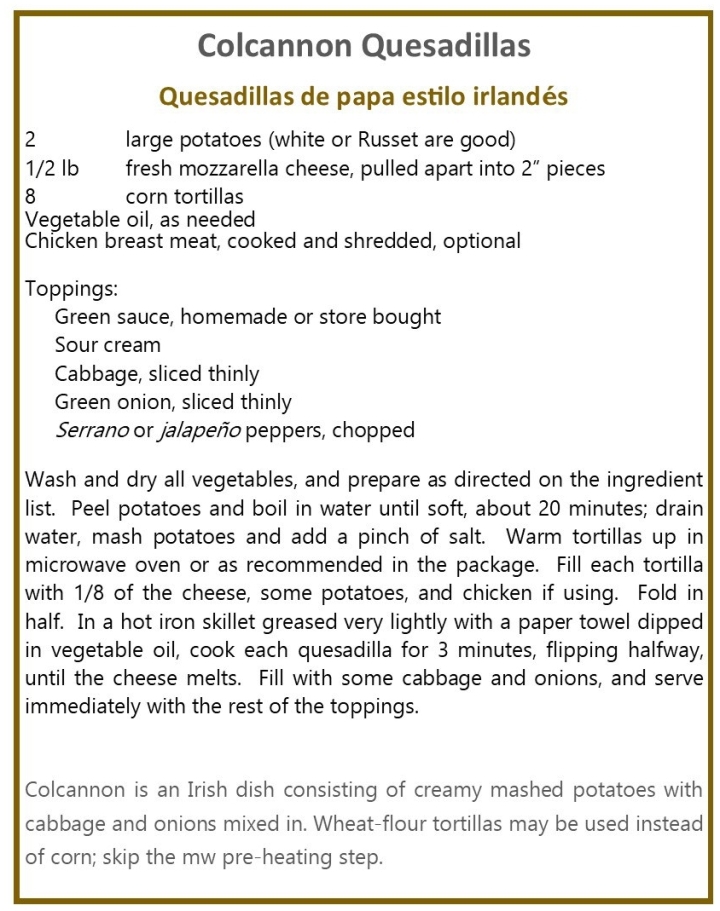 I am joining Fiesta Friday #266 with Angie @ Fiesta Friday, co-hosting this week with Laurena @ Life Diet Health and Jhuls @ The Not So Creative Cook.

I am also joining Helen@ The Lazy Gastronome, graciously hosting her What’s for Dinner? Sunday Link-up # 191. I was thrilled when I saw my Torrejas – Mexican Sweet Toast featured at this wonderful party, thank you, Helen!

I am sharing my recipe at Melt in your Mouth Monday Recipe Blog Hop # 401, hosted by Lisa @ Make Ahead Meals for Busy Moms.

I am bringing my recipe to Full Plate Thursday #578 with Miz Helen @ Miz Helen’s Country Cottage.