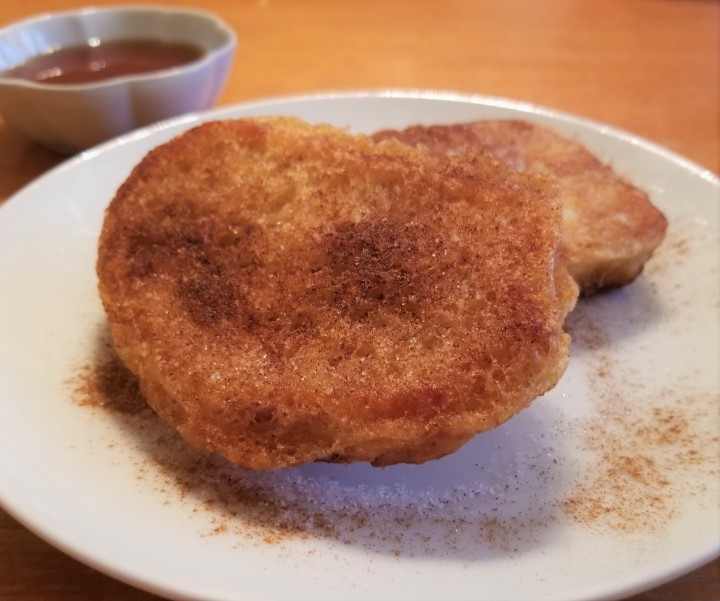 The season of Lent on the Christian calendar begins soon.  The old reckoning considered many foods such as meat, fats, eggs, and dairy as indulgent, and observant Christians would give them up during the Lenten season.  So that no food was wasted, families would try to empty their pantries on the days leading to Ash Wednesday (the first day of Lent) and even have a feast the day before, known as Shrove Tuesday.  Shrove Tuesday gets its name from the ancient ritual of shriving – confessing one’s sins to a priest in order to obtain sacramental forgiveness – which many Christians still undergo regularly, but especially right before the beginning of Lent.

Eating up all the foods that wouldn’t last the forty days of Lent without going off was eventually identified as a reward after the trial of being shriven; King cake, pancakes, Pączki (see photo), and other confections became associated with Shrove Tuesday as they were dishes that could use up all the eggs, fats and milk in the house with just the addition of simple ingredients, such as flour. This is how Carnival developed as a festive time, a period sometime after Epiphany (click here to see my post) and before Lent; the need to eat up and store energy for the fasting season of Lent on the last day of Carnival possibly gave rise to the French name Mardi Gras, literally meaning ‘Fat Tuesday’.

In Spain, the Thursday before Ash Wednesday  is called “Jueves lardero”, and marks the beginning of Carnaval – a week-long Carnival period – with the same principle as Fat Tuesday, but focusing on meat, eggs and bread; Spanish tortillas (flat omelettes) and torrijas are traditional choices for Carnaval.  Torrijas are similar to Pain Perdu (literally “lost bread”) from France and later, New Orleans, made with stale bread soaked in milk and eggs, then fried, which later translated into the American French toast. The main difference between French toast and torrijas is that for the first, the stale bread is dipped in a mixture of milk and eggs, while the Spanish dish requires first soaking the bread in milk flavoured with sugar and cinnamon, then dipping in foamy beaten eggs before frying.  In Mexico, there are many famous Carnaval weeks around the country, and there are many different savoury and sweet treats, depending on the region. French toast and torrijas are popular, although mainly as breakfast or brunch items; the latter – most commonly called torrejas – are traditionally served soaked in piloncillo syrup (raw brown sugar), but I like them crispy, sprinkled with sugar and cinnamon, and syrup on the side.

In a shallow bowl or pie plate, mix milk, sugar and cinnamon (photo below, left); place bread in the bowl, preferably on a single layer, and allow the slices to soak for one minute, then flip (photo below, right):

Meanwhile, beat the egg whites in a bowl until firm and fluffy, then incorporate the yolks, folding softly with a spatula:

In a large frying pan, heat up the oil at medium/high; once hot, start dipping the slices of bread, one by one, in the egg batter, handling carefully as they have become fragile from soaking in the milk (photo below, left), then transfer to the pan to fry (photo below, right):

Flip the slices once they are golden brown, allowing to cook and brown on the other side (photo below, left); remove from the oil into a colander fitted with paper towels (photo below, right):

Serve hot, sprinkling with sugar and cinnamon, and syrup on the side: 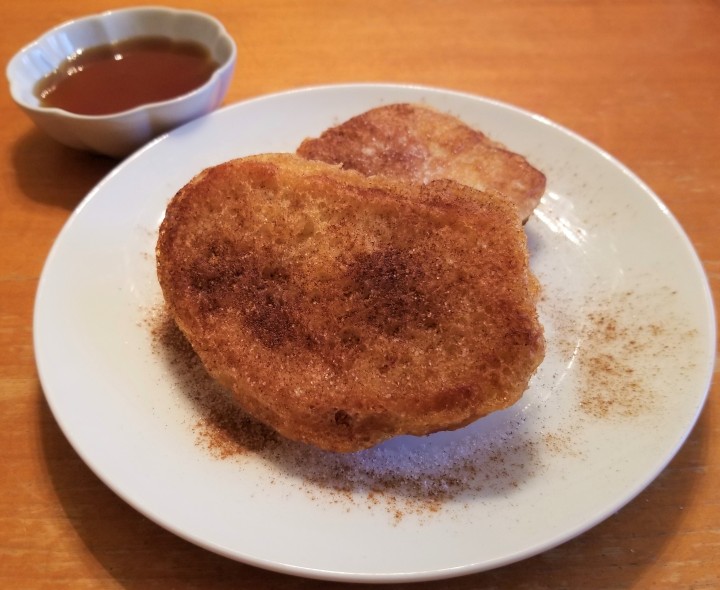 The two-stage dipping technique gives the torrejas a creamy texture inside, and a light and very crispy coating.  In addition, there is no worry about egg left undercooked at the centre of the bread.

Although many Christians in Mexico still give up some foods during Lent, the observance has narrowed to Fridays only, and the kind of foods is, for the most part, just red meat and pork.  In that case, these scrumptious torrejas may stay on the table to enchant the whole family all year round.

I am joining What’s for Dinner? Sunday Link-up # 190 graciously hosted by Helen @ the Lazy Gastronome.

I am bringing my recipe to Melt in Your Mouth Monday Recipe Blog Hop #400 with Lisa @ Make Ahead Meals for Busy Moms .

I am also sharing my recipe with Sherry @ Savvy Apron and Nicki @ Sweet Parrish Place at their fun Totally Terrific Tuesday # 218.

I am bringing my recipe to Thursday Favourite Things #427 with Pam @ An Artful Mom,  Bev @ Eclectic Red Barn, Katherine @ Katherine’s Corner, Amber @ Follow the Yellow Brick Home, Theresa @ Shoestring Elegance and Linda @ Crafts a la Mode.  Special thanks to Pam for featuring my Sweet or Spicy Tamarind Treats at this party.

12 thoughts on “Torrejas – A Sweet Indulgence for Carnival”