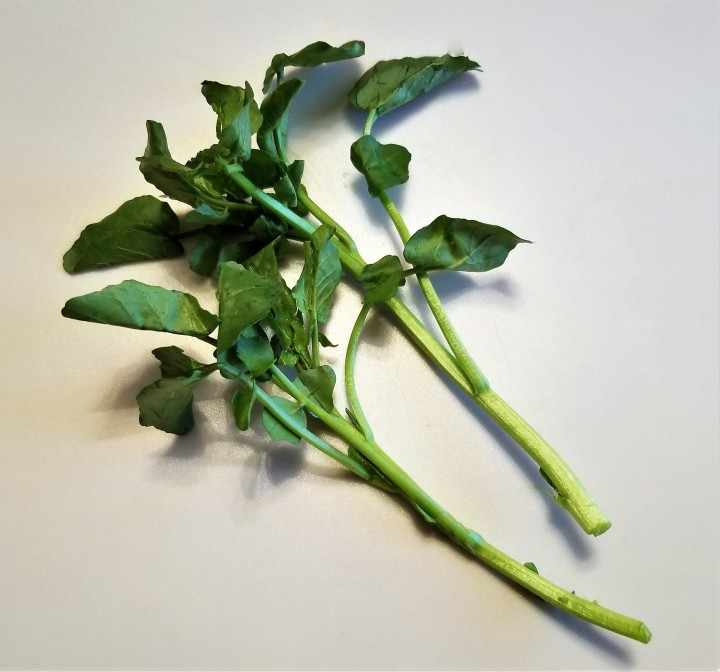 Watercress is a perennial semi-aquatic plant, native to Europe and Asia, likely consumed as food since nomadic gathering times.  After being introduced in the Americas by European settlers and explorers – who might have used it to counteract scurvy – it invaded valleys and shores like an avalanche, and nowadays it is even considered an invasive plant in most of the US.  Watercress (Nasturtium officinale), belongs to the mustard family (Brassicaceae); the genus name Nasturtium most likely comes from the Latin naris – nose and torquere – to twist, describing the reaction caused by its pungent, fiery taste.  The edible flowers Tropaeolum sp are commonly called nasturtiums for the same reason, although botanically they are only remotely related to watercress (both Nasturtium and Tropaeolum are genera of the Brassicales order, but belong to different families).  In Mexico, watercress is known as berro, and it has become important enough in the country to be included on the list of Mexican potherbs (quelites), in spite of its foreign origin.

*NOTE: If watercress has been foraged, it is important to watch out for areas with farm animals in the vicinity, since it grows near water and muddy grounds, and may become easily contaminated.  I bought mine at the supermarket, but I disinfected it with a solution of white vinegar/water, just in case.

Mix lettuce and watercress in a large bowl, then place orange pieces on top (photo below, left). In a separate container, mix oil, vinegar, salt and pepper; incorporate onions, then squeeze juice from one orange (photo below, right):

Mix onions and dressing thoroughly. Cover the containers and refrigerate until serving time. Right before serving, pour dressing and onions onto the large bowl (photo below, left); toss to coat greens with dressing, and incorporate all veggies together (photo below, right): 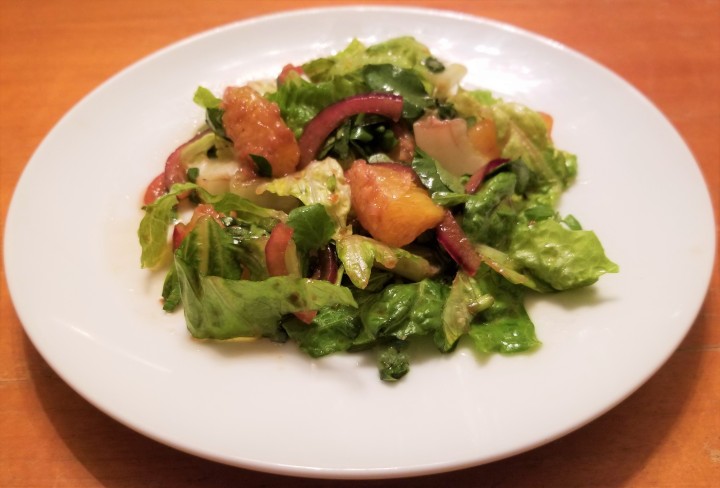 This is an excellent salad to serve as a side, as well:

The tangy sweetness of the dressing and oranges goes marvellously with the peppery and crisp components of the watercress. In the photo above, this salad becomes part of a complete vegetarian meal served with cheesy potato patties (recipe in my next post.)

I am joining Fiesta Friday #266 with Angie @ Fiesta Friday, co-hosting this week with  Laurena @ Life Diet Health and Jhuls @ The Not So Creative Cook.

I am also joining Helen@ The Lazy Gastronome, graciously hosting her What’s for Dinner? Sunday Link-up # 191.  I was thrilled when I saw my Torrejas – Mexican Sweet Toast featured at this wonderful party, thank you, Helen!

I am sharing my recipe at Mix it-up Monday #150, hosted by Lisa @ Flour Me with Love.