First of all, what is barbacoa?  There is some confusion about the Spanish word barbacoa, for its similarity to the English word barbecue, and the fact that both are techniques to cook meat over coals.  Whereas the arrangement for a barbecue involves cooking on a grill, if we were to compare the Mexican barbacoa to any cooking technique from the United States, it would be better to think of a Hawaiian luau under the moon, featuring the kalua – a technique of cooking large pieces of meat, or even whole animals, in an underground oven that the locals call imu.  However, Mexican civilizations probably developed their technique independently; this is corroborated by the long existence of the piib, an underground oven that has been used in the Yucatan peninsula, and some parts of Central America, since pre-Hispanic times, and some historians believe that the word barbacoa comes from the Mayan term Ba’albak Kaab, composed of three words: ba’al – contain, bak – meat, and kaab – soil, earth.  The principle of barbacoa is to dig a pit in the ground, about three feet deep, either round or rectangular, with enough surface area to allow about one feet of free space around the meat, for air circulation.  Modern pits are lined with brick or other ceramic materials, and old ones probably had stones.  Large amounts of wood are burnt inside the pit, until they turn into hot coals, and the stones/brick turn red.  Then, a pot with water is placed at the bottom, to provide some steam during the cooking process. A grid goes on top of the pot, then the meat on the grid, previously seasoned or marinated, and wrapped in banana or maguey leaves.  Finally, everything is covered with more leaves (or a metal sheet) to placate the heat, and sealed with dirt.  The meat is cooked for at least 10 hours before the dirt and covers are removed, and the fragrant bundle of cooked meat – the barbacoa – is retrieved.  The original piib was probably used to cook game meat, peccary and birds, but after the introduction of cattle, sheep and pigs to the New World, a whole new range of delicacies was created, from cochinita pibil in the South (pork in achiote and orange rub) to barbacoa norteña (beef tongue and cheek) in Northern Mexico.  In Central Mexico, lamb has always been the most traditional choice, and the water in the pot at the bottom of the pit often benefits from the addition of chickpeas, herbs and vegetables, to create a hearty soup.

Since I had my heart set on lamb, I looked at how barbacoa is traditionally made in the state of Hidalgo, in Central Mexico, chickpea soup and all.  The big question was how to cook the lamb in my kitchen; some recipes suggest using a pressure cooker/instant pot, while others have tried indirect heat in a BBQ kettle.  I think the first method would boil the meat (too wet), and the second would roast it (too dry); nothing wrong with either method, just not quite right for barbacoa.  In a few words, the principle of the underground oven, with the addition of a pot of water, is to very slowly cook and slightly steam the meat inside a sealed space, with a ceramic lining to preserve heat.  To me, this sounded exactly how a slow cooker would do the job, and that was the method I decided to use.  I was quite pleased with the results (photo, top of the post): the cooked lamb was juicy and falling apart, ready to pile onto soft corn tortillas, along with fresh chopped onions and cilantro, and topped with salsa borracha (“tipsy” sauce); a bowl of chickpea soup completed a satisfying meal .

I placed the chickpeas and carrots at the bottom of the slow cooker pot; poured water over, and then arranged bay leaves and cloves on top:

In a small bowl, I mixed all the ingredients for the rub to form a paste, and set it aside.  I patted the leg of lamb with a paper towel, then trimmed the fat. Serious Eats reports that “ … most of the compounds that give lamb –or any meat– its distinct flavor, tend to be concentrated in its fat.” So, for less gamey flavour, trim more of the fat.  I removed most of it, leaving a thin layer for flavour and to preserve moisture:

I spread the rub mix all around the meat with a spoon, lightly massaging the surface with my fingers.  I placed the lamb on top of the prepared vegetables in the pot.  Since the slow cooker allows the addition of very small quantities of water, the meat was just sitting on top of the veggies, but not immersed in the water, so no grid was required:

I arranged some fresh lemon leaves on the meat.  The original recipe calls for fresh avocado leaves, but I did not have access to any; other options are fresh plum leaves, or just some extra bay leaves, if nothing fresh is available.  I happened to have a little experiment of mine growing in pots, sprouted from seeds of organic lemons; my lemon “trees” are just over one year old, so no fruit yet, but I read that the leaves are perfectly edible, so I cut a few to use on my lamb:

The last step was to wrap the meat with the onion outer layers (and maguey leaves, but I did not have any), and put the cooker lid in place.  With the slow cooker, it is not necessary to cook the lamb for 10 hours, but I did not want to rush the process either, so I used the low setting for about 6 hours.  In the meantime, I prepared a batch of my red spicy sauce and set it aside (salsa taquera).  In a saucepan, I let the orange juice and tequila come to a boil, then incorporated the sauce, stirring until the mixture was boiling; I reduced the heat and simmered for about ten more minutes, then let rest away from the heat, to bring to room temperature.

Before serving, I uncovered the meat and checked doneness with a fork.  The lamb was falling apart easily, after slowly cooking from the accumulated heat in the ceramic pot, and steam from the bottom, while rendering fat and losing just a small amount of juices.  The water had been transformed into a rich broth, infusing flavour into the chickpeas and carrots:

Wow, I was hungry! I removed the onion wrap, leaves and cloves before serving.  At the table, some tortillas were promptly filled with shredded barbacoa, and dressed with a colourful Mexican flavour palette: green cilantro, white chopped onions, and red tipsy sauce.  A bowl of chickpea barbacoa broth completed the meal, along with lime wedges for a sprinkle on both the tacos and the soup: 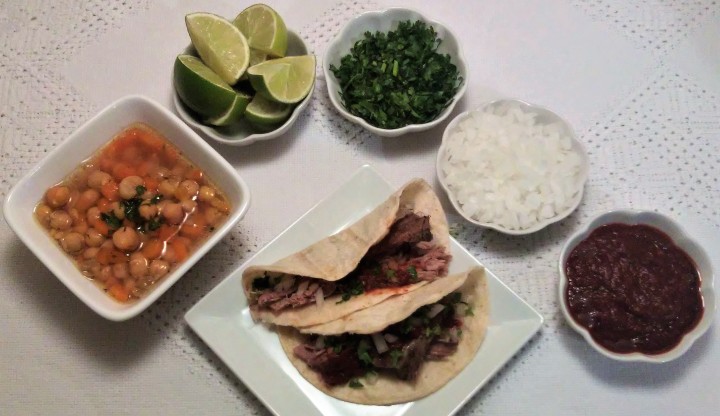 * On lamb meat – Generally, the recommended portions are 1/3 lb (150 g) of boneless lamb per person, or 1/2 to 2/3 lb (226-300 g) of bone-in; however, my husband and I managed to eat about 2/3 lb each, so there were hardly any leftovers from this meal (yikes!) I would allow double the recommended amounts for this recipe, because it is better to have leftovers than hungry people.  Using the same parameters, bone-in cuts such as chops or shanks may be combined with boneless meat for a richer barbacoa.

** On salsa borracha – This sauce is called “tipsy” because of the alcoholic ingredient.  The traditional recipe lists pulque, which is prepared by fermenting sap from maguey plants, but it is hard to find, even in large urban areas in Mexico.  Some people substitute with beer, but I think tequila gives a closer flavouring, being distilled from blue agave, a relative of maguey.

*** On chickpea liquid – The liquid from cooked chickpeas (and other beans) is known in the vegan circles as aquafaba (“bean water” from Latin); it is used very successfully as an egg substitute.  In baked goods, the ratio is about 3 tbsp aquafaba for 1 egg.  For more, check out 20 amazing things you can do with aquafaba.

I am joining What’s for dinner? Sunday link-up #165 hosted by Helen @ The lazy gastronome.

I am sharing my post at Thursday Favourite Things #496, with Bev @ Eclectic Red Barn, Pam @ An Artful Mom, Katherine @ Katherine’s Corner, Amber @ Follow the Yellow Brick Home, Theresa @ Shoestring Elegance and Linda @ Crafts a la Mode.  Special thanks to Bev for featuring my Moussaka at her party.

I am bringing my recipe to Full Plate Thursday #543 with Miz Helen @ Miz Helen’s Country Cottage.