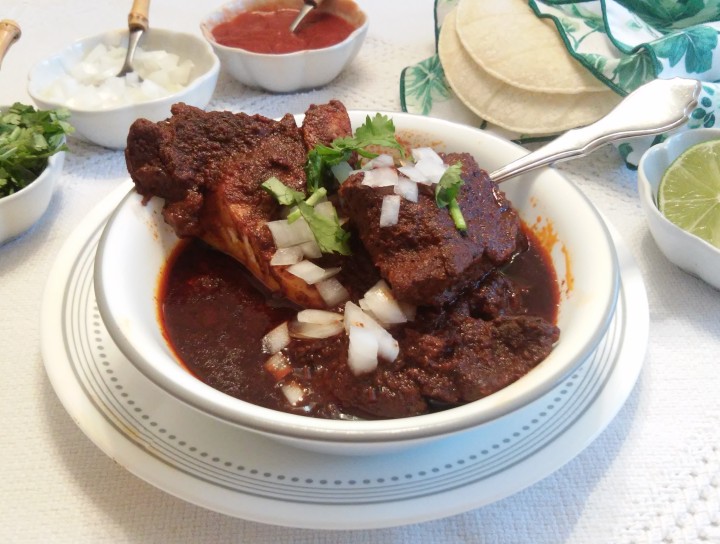 History Tidbit – An Abstract of the Very Interesting History of the Rise and Fall of the Spice Trade in Colonial Mexico During the XVI Century.

The fourth voyage of Christopher Columbus to the Americas in 1502, marked the beginning of the Spanish colonization of the New World, in the Caribbean islands; by then, Spain had aggressively rekindled the original intent of Columbus’ venture – the search for new routes and markets for its spice trade.  By 1525, a few years after completing the conquest of the Aztec empire in Tenochtitlan (present day Mexico City), Hernán Cortés had expressed his interest in the “Especiería” (spice trade) and requested rights to its exploration and exploitation within the new territories; as a manifestation of his fall out of favour with the court, Cortés was ignored.  Instead, the kingdom offered monetary rewards directly to any established colonists on the islands, who could produce commercially valuable crops of cinnamon, cloves or ginger, all exotic crops brought from South Asia.  Intense intrigue and political turmoil were the trademark of the spice trade in all of Europe at the time, with its epicentre in the Moluccas, so important that they were called “The Spice Islands” (today part of Indonesia).  For close to 80 years, Portugal had controlled the trade from The Spice Islands to Europe so, for most of the first half of the XVI Century, the British, French and Dutch empires engaged in the fight for a share, while Spain unsuccessfully tried to establish a route to the islands from Mexico; that failure finally attracted interest in growing spices in Mexican territory.  In 1558, it was Francisco de Mendoza (no doubt thanks to his father Antonio, first viceroy of the New Spain, which included present day Mexico) who obtained the monopoly for the domestic development and sale of the precious crops of cinnamon, clove and black pepper, with two thirds of the profit going to the crown, and the other third for himself, and a higher 50-50 profit ratio for the minor crops of ginger, China root and sandalwood.  Mendoza was for the most part unsuccessful, with very small yields of poor quality, compared to demand and standards in Asian markets. In 1565, Mendoza lost his concession to the trade of cinnamon and pepper; Spain had seized control of the Philippines by then, and had established a trade route from there via Mexico, but only as a middle stop, with destination to the port of Seville, in Spain.  Clove, China root and sandalwood also failed to thrive in Mexican soil at the time, and a few years later, the rights for ginger were transferred from Mendoza to Bernardino del Castillo, a land owner in Cuernavaca (in the Mexican state of Morelos) who, in spite of eventually managing a considerable harvest , did not find a profitable market in Europe, and could not gather enough interest in Mexico, since at the time ginger was considered valuable mostly for medicinal purposes.  Sadly, renewed interest in growing ginger was shifted back to Spain, and all the “know-how” developed by Del Castillo was transferred to farmers in Almería and other regions of Andalucía.  Naturalization of Old World spices in Mexico did eventually take place, as well as European interest in crops native to Mexico, such as peppers (guindilla, capsicum, chile, paprika, etc.) and vanilla, but mostly in the next century and later on.  Nowadays, ginger is cultivated in Mexico as a minor crop, but a certain cultural relevance may be presumed, since there is even a small village named Jengibre (ginger, in Spanish) in the state of Jalisco.

From the history of the unfortunate pursue of ginger as a profitable crop in Mexico, my challenge to find traditional Mexican recipes including ginger should not have come as a surprise; I was about to give up, when I came across a very popular dish called Birria, which originated in the state of Jalisco, with regional variations in other states, such as Zacatecas and Colima. According to the Royal Spanish Academy, birria is: a person or thing of poor value; someone or something deplorable; an unhealthy obsession, such as for a sport or hobby.  Finally, the fourth and last definition: “a Mexican colloquialism, goat or lamb barbacoa.”  There are many stories about the origin of the dish, and why it would be called of “poor value.” Goats were initially brought from Europe to Mexico, along with cattle, horses, pigs and sheep. A popular story claims that Spaniards allowed the natives to consume goat meat knowing that it was tough and had a strong smell, but that the natives were not frightened by this “birria”; they allegedly used pre-Hispanic techniques calling for lots of peppers and herbs to mask the odor, and long hours of cooking in their underground oven (barbacoa).  Other stories simply point out that the goat population increased very rapidly, thriving in the semi-arid regions of Mexico, including Jalisco, and farmers decided to consume the meat as a measure of demographic control; the resulting dish of heavily seasoned pieces of meat, was said to “look like a birria.” At any rate, birria is nowadays enjoyed nationwide, prepared with goat or any other meat (pork, beef, lamb, even chicken, fish or a mix), still seasoned heavily with many peppers and spices, and perhaps still looking “of poor value,” but with a delicious taste and comforting quality that justify its lasting popularity.  The technique of cooking underground is still widely used, but many cooks – especially in urban areas – have switched to conventional ovens, steamers and pressure cookers.  And where does ginger fit in all this? Curiously, the only recipes I found that included ginger amongst the long list of ingredients, were from Jalisco, which made me formulate my own theory that it was probably a later addition to the recipe, maybe in the hopes of aiding in the digestion of such a … birria?

For my recipe, I chose beef, which is a popular alternative to goat; tough outside round and a couple of pieces of bone-in shank provided a good balance of texture, and extra flavour from the bones.  For the peppers, I included ancho and cascabel from recipes from Zacatecas, and guajillo from Jalisco, but almost any medium-mild dry red peppers will do (pasilla, mulato, New Mexico, etc.).  The lists of aromatics and spices in the recipes ranged from two or three to “anything in the pantry”; I chose a good variety, including, of course, a chunk of fresh ginger.  As a cooking method, I trusted my slow cooker to the task of simmering for long hours, with a minimum loss of moisture.

Arrange meat in slow cooker.  Place the listed ingredients, from cloves to bay leaves, on a tray or counter, ready to use: 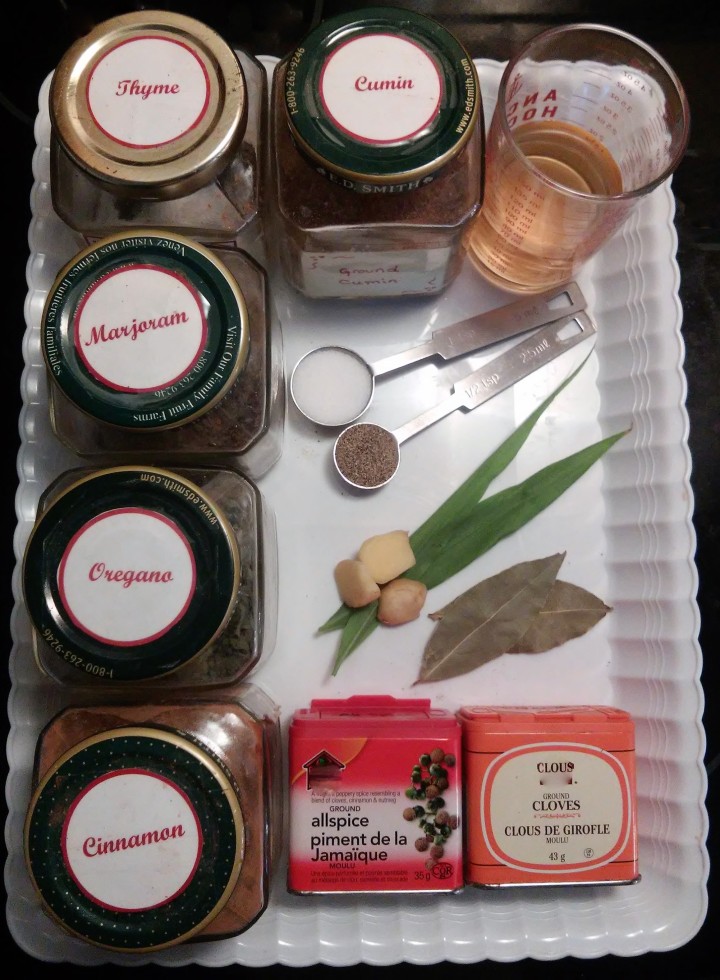 Remove stems and seeds from peppers (from left to right: guajillo, cascabel and ancho):

Fry in oil in a pan over medium heat, turning frequently, until crisp and fragrant; add garlic cloves, and continue browning.  Remove from heat, reserving garlic and flavoured oil: 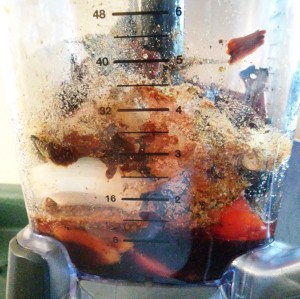 Soak fried peppers in boiling water until soft; reserve. Place tomatoes and onions in a blender jar, then add peppers with their soaking water, reserved garlic and oil, and all the ingredients measured from the tray, except the bay and ginger leaves.

Process for at least two minutes, or longer as needed, until perfectly smooth.  Pour in the slow cooker, completely coating meat; arrange bay and ginger leaves on top: 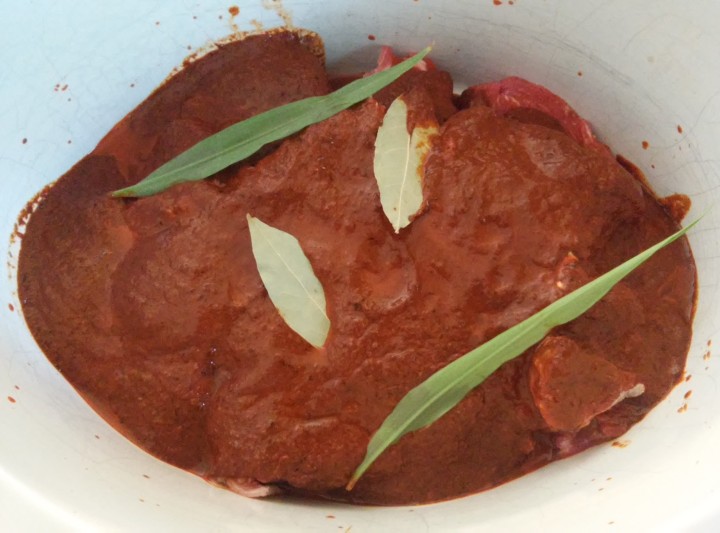 Pour the water at room temperature in the blender jar, shaking gently to collect any leftovers, and add to the slow cooker. The liquids should coat the meat, so more water may be added, if needed: 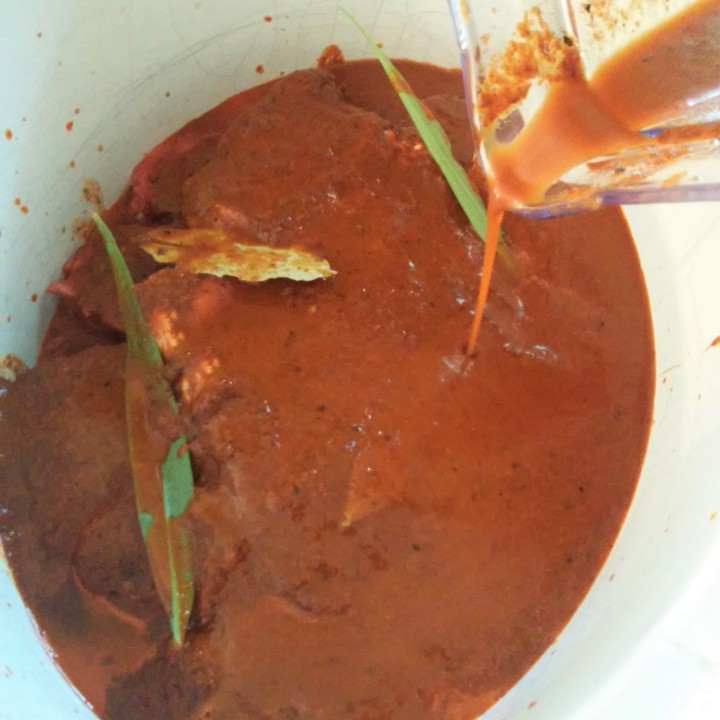 Cover with lid and cook on High for 4 hours or Low for about seven hours, until meat may be easily shredded.  Adjust seasoning with salt, to taste.  Serve two or three pieces of meat (with or without bone) in a bowl with plenty of sauce, with the rest of the items on the side: 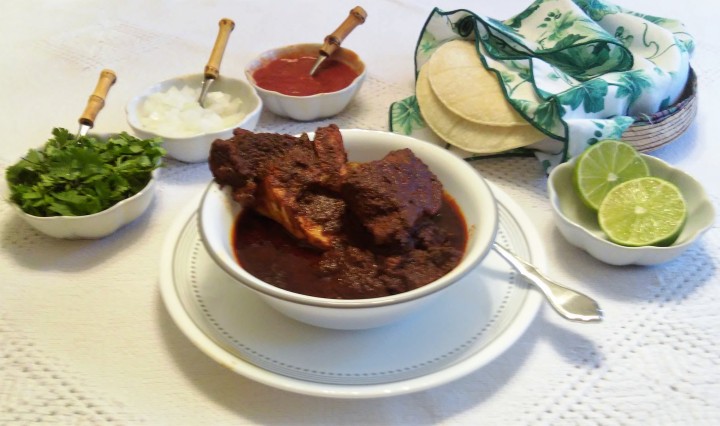 My husband was a little sceptical, at first; he even said the dish was having “an identity crisis” because I called it a stew, it was too chunky to be a soup, and yet, the sauce was kind of runny. At that point I understood exactly why it had been named “birria” (my husband was probably thinking “what on earth is this deplorable thing?” LOL).  However, my birria passed the taste test with flying colours, and by the third helping nobody felt the need to judge appearances.

The flavour was, as expected, complex and absolutely satisfying, but because of the relatively mild peppers, not spicy hot. That lack of fire may be compensated with a spoonful of the spicy salsa, offered on the side.  In my next post, I will show another way – also very popular – to enjoy birria, along with my recipe for the spicy salsa.

I am bringing my birria to Fiesta Friday #247 hosted by Angie @ Fiesta Friday, this week presenting Halloween treats (and much more!), with co-hosts Antonia @ Zoale.com (she embraces taste good/feel good food) and Laurena @ Life Diet Health (with plant-based recipes and tips for healthy living fun.) UPDATE: My birria got featured!

I am joining What’s for Dinner? Sunday Link-Up #220 with Helen @ The Lazy Gastronome.

40 thoughts on “Birria – An Exceptional Dish”