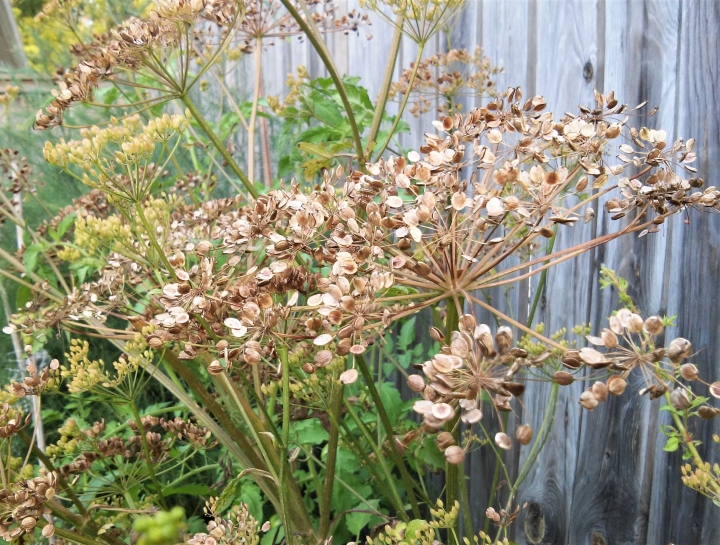 This is a quick recap on one of my favourite crops (gardening zone 6B), the sometimes under-appreciated parsnip (Pastinaca sativa).  As I wrote in early spring, I restrained my impatient self from harvesting all my sweet parsnip roots, and left one in the ground, hoping that it would bolt and grow some seed.  Parsnips are part of the Apiaceae family, which includes other vegetables (such as carrots and celery), herbs (such as parsley) and also many ornamentals, appreciated for their characteristic clustered flowers, forming an umbel (the family is also known as Umbelliferae).  At the beginning of June, I reported a huge growth spurt on my plant, and indeed some blooming was spotted, which has developed over the past two months, as may be appreciated in these photos:

Each of the flat ovals is a fruit, which are now mostly dry and ready for the harvest (see photo at the top of the post, taken this morning.)  What a resplendent way for this parsnip plant to complete its life cycle, gifting hundreds of neat pockets, each carrying seed for my next crop!  Sowing time is usually in the spring, to allow the tap roots enough time to develop, then left to overwinter for sweeter roots the following spring; I will save lots of seed in a paper envelope until then, but I am doing a little experiment by spreading a few ovals now; maybe some will get swollen and sprout before winter comes:

And although I could pull the aging parsnip plant now, I will leave it alone until it dies of natural causes in the fall (parsnips are biennials), since I have no more planting for that spot this season, and also because the neighbouring tomato plant decided to grow on a spiral around the tall parsnip stem (below).  Oh, what a noble life, even serving as a trellis now!

FUN FACT – According to Wikipedia: “Like carrots, parsnips are native to Eurasia and have been eaten there since ancient times … The parsnip was much esteemed [by the Romans], and the Emperor Tiberius accepted part of the tribute payable to Rome by Germany in the form of parsnips.”