I finished my last post with a teaser, wondering about what people in the Mexican state of Sinaloa do with the huge piles of wooden stakes – such as the one shown at the top of the post – which are used to prop tomato vines, and are left behind after the last tomato crops are harvested.  These stakes are widely known in Sinaloa as “vara blanca” (white spear), which might include up to five almost identical species or subspecies belonging to the genus Croton (C. alamosanus Rose, C. flavescens Greenm., C. reflexifolius Kunth, C. watsonii Standl. and C. septemnervius McVaugh). Their use in large scale as horticultural stakes is relatively new, but some studies on sustainability and selective extraction have already been done, to plan strategies to preserve the tropical forest in the region; this is important since they are also collected as fire wood, and to produce coal.

Near the tomato fields, just by the side of the road to Navolato, there are several eateries, from improvised stands with a tarp offering antojitos (“little cravings”, usually fried snacks made of corn dough), to more established restaurants, with an open fire and a kitchen, and tables set up around, covered with plastic tablecloths.  The place we chose for our Sunday brunch was called “Las Ilusiones” (“The Hopeful Dreams”) with one main item on their menu: roasted mutton (carnero asado).  A big attraction is the open fire in the middle of the property, a long row of … yes!  Those stakes from the pile, furiously burning without respite, providing direct heat to sear the big pieces of speared mutton, and eventually turning to coals, pushed under the large pieces of meat, to slowly roast them and finish the cooking process:

The kitchen counter in the back is a joy to see, with many hands involved and not one lacklustre: there is chopping of meat, and kneading of corn dough; the younger staff members are washing dishes, filling orders, and helping around:

A young girl is crisping tortillas, while topping them with asientos – cracklins (strained bits from the leftover that lies in the pot after rendering fat in the kitchen), while another may be seen in the background, serving bowls of broth: 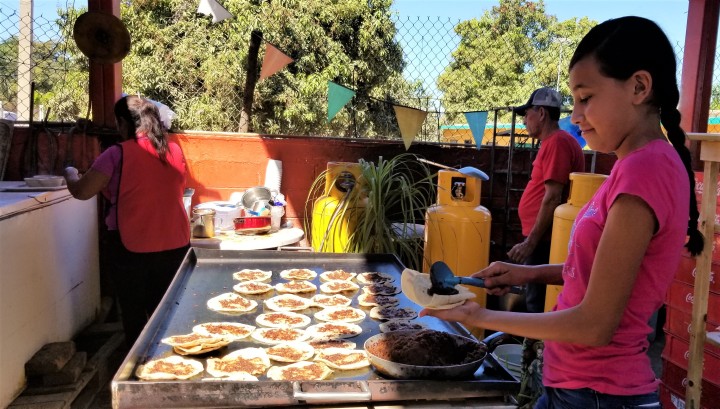 Handmade tortillas are constantly being pressed by skilled cooks, and grilled on a large metal surface (comal):

At our table, we ordered a platter, which consisted of a large portion of roasted and shredded mutton, with sides of house salsa, chopped onions and cilantro, and limes.  It also included cubes of fresh cheese to share, as well as bowls of broth and crispy tortillas topped with cracklins (one of each per person):

The most satisfying part was to take one of their freshly made tortillas, and prepare our own tacos, filled with a generous portion of mutton, and topped with chopped onions, cilantro, salsa and a sprinkle of lime juice:

Was it the meat, sourced from local sheep farms? The way the vara blanca was re-purposed as wood for the cookout? Or the artisanal tortillas, handmade and served piping hot from the comal?  I think all these factors were equally important, and made me think of this Culiacan style treat as an “eco-taco.”

16 thoughts on “White Spears and One Great Taco”