This dessert came to Mexico from Spain during colonial times, with the introduction of dairy products from farm animals such as cows and goats, all new to the land. In Latin America and lately in the US, as a Hispanic influence, flan is regarded as a custard poured on caramel and cooked to set in a water or steam bath, similar to French crème caramel.  According to Wikipedia, the word flan comes from the Old French word flaon, in turn from Medieval Latin fladonem, which may be traced to the Old High German form flado, a sort of flat cake.   In some countries, including Canada, a flan is traditionally a tart, with a pastry base and filled with custard or other savoury or sweet preparations.  One of my daughters took a student summer term in Denmark, and stayed in France and Portugal for a few days on her way back; she brought home an example of this kind of tart, Portuguese pastel de nata:

In contrast, in Mexico flan is always crust-less; ubiquitous on restaurant menus, whether high-end or family businesses, it has remained popular since colonial times. During my last visit to Mexico, I tried a slice at a side-of-the-road restaurant (photo below, left) and saw some packed at a supermarket, sold by weight (photo below, right):

As with any other recipe, there are many variations of flan in Mexico, some with condensed milk, cream cheese, and different flavourings, but I have always preferred the simplicity of the classic recipe, with the Mexican touch of vanilla.

A note on the cooking method:  I like using my double boiler, which consists of two pots; one holds hot water and is placed on the stove, and the second fits tightly on top, containing the food (in this case custard).  The key is not to fill the bottom pot too high, so the water does not touch the top pot, and the food is cooked very gently and slowly with the heat from the steam and hot air between the two pots (see photos below.)  Another setting that anyone may put together if a double boiler is not available, or when cooking several moulds at the same time, is using a water bath, by placing the mould with the custard, tightly covered with foil, inside a bigger pot or mould filled with hot water, then either cook on the stove with the large pot covered, or in the oven at 350°F (180°C).

Prepare caramel in mould if it is stove-top proof (otherwise prepare in a saucepan and then very carefully pour into mould.)  Place butter and sugar in mould (or pan) over medium heat (photo below, left); stir to incorporate, but stop stirring as soon as the sugar starts to melt.  Allow to continue melting and cooking until it caramelizes (photo below, right):

Using an oven mitt to hold the mould, spread caramel over the bottom of the mould, by tilting it.  Set over pot with hot water in double boiler, as in the photo below (steam cooking) or for a water bath, inside a bigger pot with hot water.  In a bowl or plastic pitcher, mix eggs, milk, sugar and vanilla until sugar dissolves.  Pour through a strainer over caramel in prepared mould: 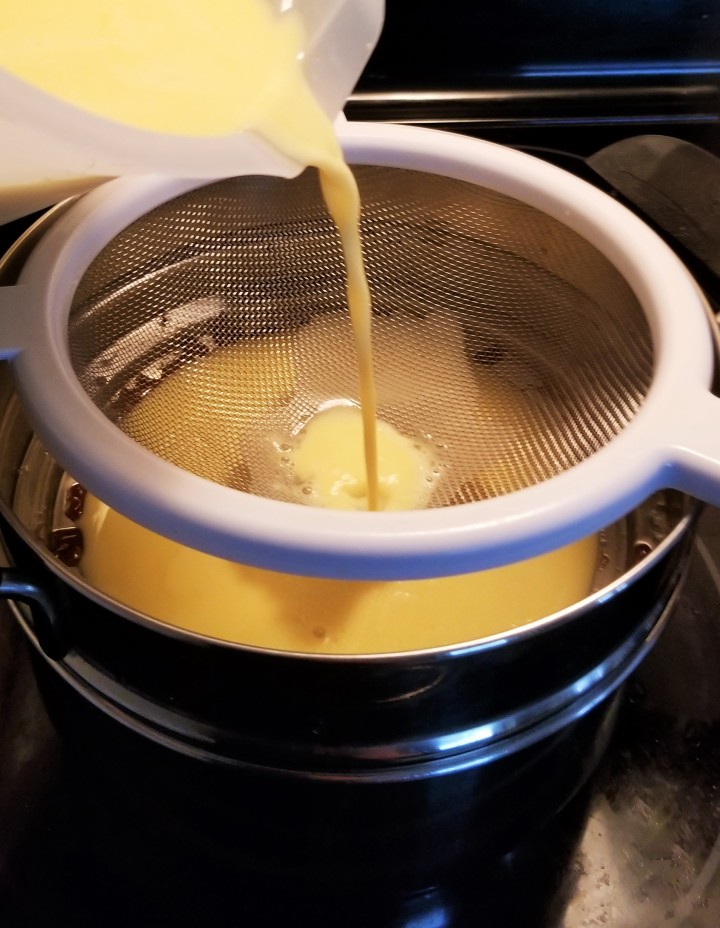 Cover and cook for 40-45 minutes (see note above for methods), checking that water is boiling gently and does not evaporate completely (add more hot water if needed).  The flan is ready when a toothpick inserted in the centre comes out clean:

Remove from heat and allow to cool down for at least 20 minutes.  Loosen flan from sides of the mould by pressing gently with two fingers, or running a knife very carefully, around the edge.  Place a serving plate, upside-down, on top of the mould, then flip them over together, to catch the flan, caramel side up, on the serving plate: 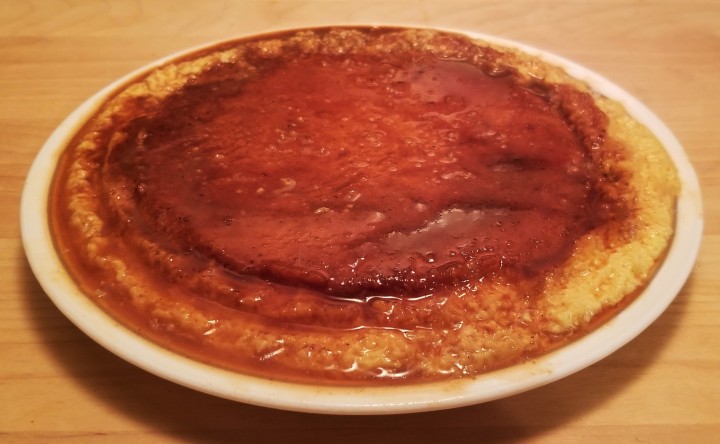 Store in the refrigerator for at least one hour, and for up to three days.  This is a convenient and delicious choice for a make-ahead treat, ready to serve as a matinal sweet bite, or a scrumptious dessert:

The top pot of my double boiler has this design of “steps” at the bottom, partly so it will fit more tightly on top of the other pot; this makes the edge of the custard thinner than the rest, and tends to get it overcooked (you can see the bubbly, wrinkled texture). It tastes fine but it is not as smooth and silky as it could be.  A solution may be to double the amounts for a taller slice, like the one I had at the country restaurant, just adjusting with a longer cooking time; of course, a straight-edged mould in a water bath would not have this issue at all.

Flan brings back so many nice memories of Mexico; I get emotional reminiscing on happy times with flan, from making it at home with my mom as a teen, to that slice I recently shared with my sister by the side of the road; and I always think of Lucy, my friend from high school, who owns her own dessert business in Mexico City, specializing in the best flan in town:

19 thoughts on “Custard with Caramel – Flan”