Chocoflan is a delightful dessert for which a layer of goat’s milk caramel (cajeta) is poured at the bottom of a baking pan, followed by chocolate cake batter, and topped with Mexican custard (flan) mix; it has also been named pastel imposible – Impossible Cake because, after baking, the cake layer “magically” appears at the top, so when the cake is turned upside–down onto a serving plate, the beautiful flan sits on top of the cake, all covered with delicious cajeta (photo at the top of the post.)

It really is not hard to explain this phenomenon; it all has to do with the density of the different components involved. Regardless of how the layers are poured into the pan, they will tend to rearrange themselves in order of density, the one with the highest one at the bottom.  In this case, the highest density is for cajeta, with milk caramels having an average density of 1.89 g/cm³; custard is next, with 1.07 g/cm³.  Chocolate cake batter is the most complex component, because it includes dry ingredients (flour, cocoa powder, sugar, leavening agents), wet ingredients (fat, eggs, milk) and also has a fair amount of bubbles, created either by air (from beating before baking) or CO2 (from the leavening agents’ reaction, ignited during baking).  There are mixes with high densities, such as 1.18 g/cm³ for Cake Boss™ Milk Chocolate mix to the very low density of Devil’s cake mix, at 0.7 g/cm³.  This means that a cake mix with very low density might show the shift to the top even before baking, while a higher density cake mix might stay initially at the bottom, and migrate to the top as the batter cooks and CO2 is released, creating bubbles and considerably reducing the density of the cake.

For this post, I mixed my own chocolate cake batter and flan mix, and used homemade cajeta from a previous post. Although I did not measure their densities, I thought it would be interesting to test the relative densities of my chocolate cake and flan by pouring in different order, to see which one would stay on top before (and after) baking. First, I lightly greased two small moulds, and because cajeta is sticky, and by far the item with the highest density, I spread a layer at the bottom of both moulds:

I poured flan mix first and chocolate batter second, for one mould (left) and the opposite for the other mould (right).  The chocolate batter went right to the bottom for the left mould, and remained there in both cases:

That meant my chocolate cake batter’s density was high, probably too close to the flan mix’s so the movement to the top was too slow to detect.  The photo below shows the same moulds, after baking, partially immersed in water, at 350°F:

Both show the same layering from bottom to top: cajeta, flan and chocolate cake.  The baking powder and soda in the cake batter created bubbles, lowering the density and causing the cake to move to the top of the moulds! The photo at the top of the post shows one of the cakes, flipped onto a serving plate.

Ingredients (enough for 8 cups, plus some extra cake batter)

1 cup cajeta (click here for my recipe, or bottled)
Vegetable oil, for greasing the moulds

I used four small 1-cup moulds and a Bundt cake mould.  Lightly grease bottom and sides of moulds with oil.  Spread a layer of cajeta to cover the bottom and about 1 cm up the walls of the moulds:

Using and electric mixer, beat mix at high speed until smooth.  Continue mixing, adding eggs, one at a time, and scraping sides down with a spatula (photo below, left).  Mix for another minute, until batter is uniform and shinny (photo below, right):

Prepare custard mix: Place all ingredients in a blender jar (photo below, left).  Process until foamy and uniform ( photo below, right):

Fill about 1/3 of each prepared mould with cake batter, then fill with custard mix, to about 1/4 from the top (photos below):

This proportion is necessary so that, when the cake rises during baking, the final layers will have almost equal thicknesses.  Cover each mould with Al foil, and arrange in a rimmed tray.  Place tray in the pre-heated oven, and carefully pour hot water in the tray, to fill it halfway.  Bake for 30 minutes, then check the largest mould with a toothpick, which should come out clean when cake is done; continue baking and checking every five minutes.  My ring took 45 minutes, but a solid circle might take longer, up to one hour.  (NOTE: there will be some leftover cake batter; I poured it into four cupcake moulds and baked, uncovered, next to the tray).  Remove from the oven, uncover, and let cool completely before attempting to remove from the moulds:

Once completely cooled to room temperature, loosen sides carefully with a spatula; place a serving plate upside-down on top of the mould and flip.  Remove mould; I drizzled some extra cajeta on top: 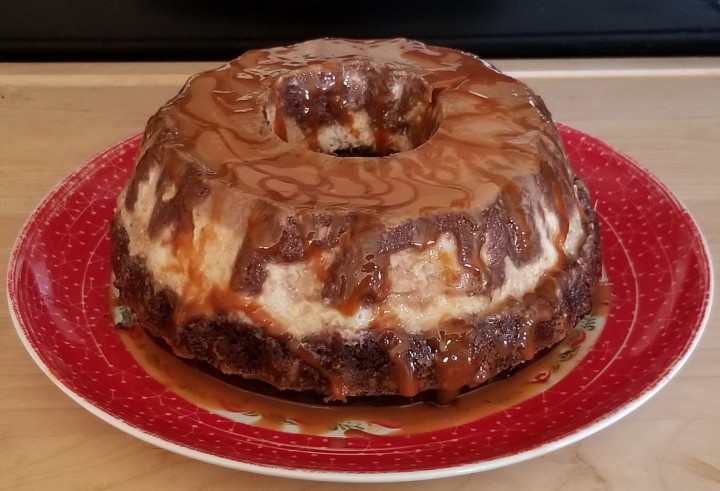 Note that my Bundt shape has some chocolate cake on the sides; this is probably because the walls of the mould had a pattern, which ended up trapping some batter as it was moving up.  However, the cross-section had well defined layers, with roughly equal thicknesses:

The small moulds came out easily and also had a nice proportion between the cake and the flan layers:

The first time I ever tried chocoflan was at a hotel in Monterrey, in the Mexican state of Nuevo Leon, in 2006.  My friend Lucy (who currently owns a dessert business in Mexico City specializing in the best flan in town) told me that around that same time, she was living in Veracruz (an important port and city in the Mexican state of Veracruz) and she introduced chocoflan as an alternative to her specialty, since people in the port favoured cake to pair with a cup of their excellent coffee (The terrain and climate of Veracruz provide precious conditions for crops of strongly bodied coffee beans).  Nowadays, chocoflan is a very popular dessert nationwide; it may be found packaged at grocery stores:

And offered in restaurant menus, such as the take-out slice shown below, from a Panama™ restaurant in Culiacan, in the Mexican state of Sinaloa:

In the slice above, note how the cake layer is much thicker than the flan; this is not the ideal ratio for this dessert, as explained before.  The cake batter and custard mix were probably poured in equal amounts, and the cake ended up rising to almost double the amount of flan.

After explaining the processes behind this recipe, Chocoflan might not qualify with the bombastic adjective of “impossible” anymore, but it is still quite remarkable that the rising of the cake happened quickly enough to make it move to the top before the custard mix set into a solid flan. For a lighter experience, using a cake recipe with a lower density, such as devil’s food cake, should send the batter to the top even before baking.

I am bringing my recipe to Thursday Favourite Things #435 with Bev @ Eclectic Red Barn, Pam @ An Artful Mom, Katherine @ Katherine’s Corner, Amber @ Follow the Yellow Brick Home, Theresa @ Shoestring Elegance and Linda @ Crafts a la Mode. Special thanks to Bev for featuring my Cod Stew at her party.

This is a great dessert to have with a cup of tea, too! I am linking to Su’s Tea Time in the Blogosphere.

I am bringing my recipe to Fiesta Friday #324 withAngie @ Fiesta Friday, this week co-hosting with Diann @ Of Goats and Greens and Liz @ Spades, Spatulas & Spoons.  UPDATE: Thank you so much to Angie, Diann and Liz for featuring this recipe at Fiesta Friday # 325.

I am sharing my recipe at What’s for Dinner? Sunday Link-Up #249 with Helen @ The Lazy Gastronome.  UPDATE: Extra thanks to Helen, for featuring this recipe at her party #250.

I am also sharing my recipe at Over the Moon #221, graciously hosted by Bev @ Eclectic Red Barn, and Marilyn @ Marilyn’s Treats.