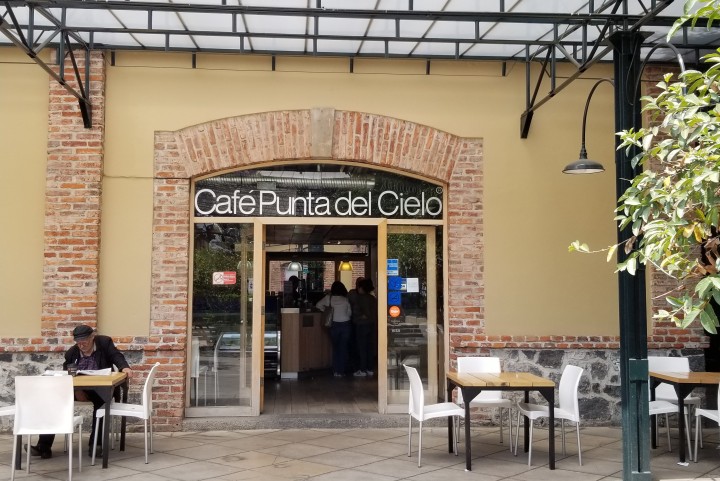 Mentioning coffee in my previous post got me thinking of a lot of topics, but today I wanted to attain a relaxed Sunday mood; inspired by a prompt by Jim Adams @ A Unique Title for Me, brilliantly hosting this week’s theme: Song Lyric Sunday – Hometown or City (see my selection below), I have chosen to talk about a coffee shop inside a heritage building in my native Mexico City (pictured at the top of the post.)  This haven of peace is inside Plaza Loreto, a shopping and cultural centre in the hectic borough of San Angel (Altamirano #46, Tizapán San Angel.)  The site and main structures were salvaged and converted into this plaza in 1992, after the Fábrica de Papel de Loreto y Peña Pobre, a paper factory operating there since 1929, had to be closed and sold due to several tragedies, including fires.

I have shared photos of other iconic monuments and statues in Mexico City in previous posts (for example, Manacar building, and along Paseo de la Reforma), and Plaza Loreto is another beautiful example of cultura capitalina (Mexico City, capital city culture), in which old and modern architecture and motifs combine to offer an efficient use of space while preserving the rich heritage of the structures: 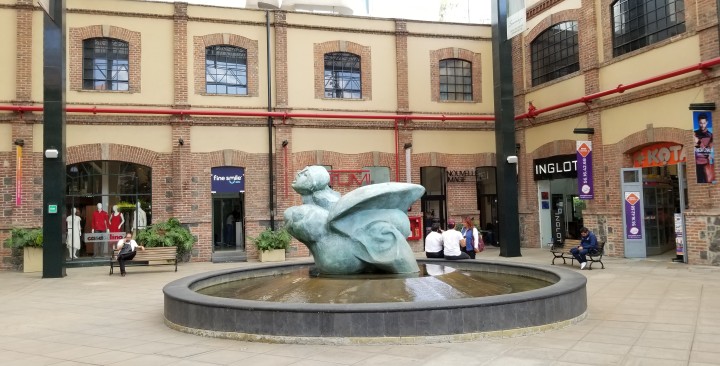 There is an Art and History museum in the premises (Museo Soumaya- Loreto, free admission), along with sculptures and other outdoor art exhibits (as seen above).

Amongst the many businesses in the mall, my featured coffee shop belongs to Punta del Cielo™, a 100% Mexican company; their name, “Tip of the Sky”, reflects the origin of their high-altitude coffee beans, from summits of the mountains in the Mexican states of Veracruz, Oaxaca, and Chiapas. High altitudes allow coffee plants to maintain an optimum temperature and the perfect balance of light and oxygen for coffee trees to grow healthy, and the harvested beans to be of the highest quality.  Cocoa beans are also part of their expertise; below, there are three examples of their products:

The company has established a successful niche for their products nationwide, in spite of tough competition from transnational companies invading the Mexican coffee and chocolate markets (no secret here, AKA, Starbucks™ and the Swiss company Nestle™.)  In the photo below, left, a sample of the Punta del Cielo beverage menu, showing a nice selection of both hot and cold choices and, right, a fine cup of coffee, for a soothing Sunday afternoon:

Song Lyric Sunday – Hometown or City: I immediately thought of the perfect song to complement this post, about my birthplace, beautiful Mexico City. “Mi Ciudad” (My City), is a homage to Mexico City, by José Alfonso Ontiveros Carrillo (1941-1982), better known as Guadalupe Trigo; although he was actually born in Merida, the capital city of the Mexican state of Yucatan, he moved with his family to Mexico City at the age of six.  As a composer, guitarist and singer, he was very successful as part of the New Latin American Folksong movement in the 1970s.

(Composers: Guadalupe Trigo and Eduardo Salas; my translation to English) 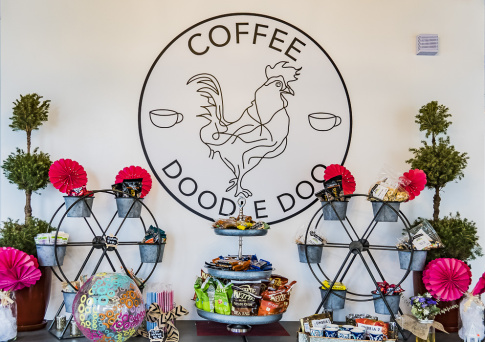 12 thoughts on “Mi Ciudad – A Coffee Nook in Mexico City”