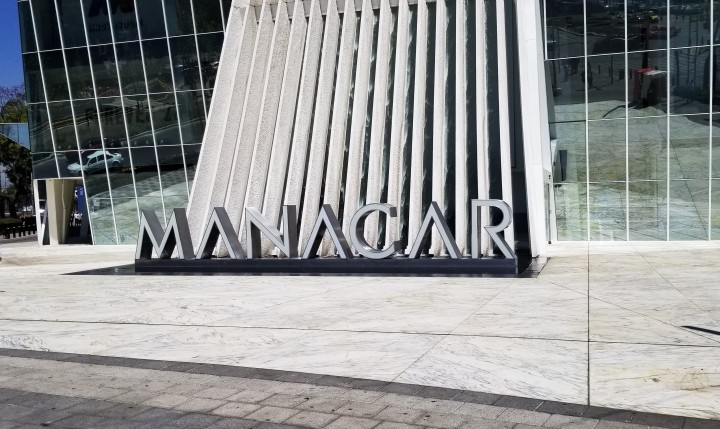 While growing up in Mexico City, I had a fair share of commuting time, so much in fact, that my destination points became the only focus; streets and structures were merely uninteresting routes and objects in the background.  Even the places I was going, to work, watch a movie, or attend a class, were also taken for granted as permanent landmarks in my daily routines.  Now, when I get the chance to visit, like last March, I see the city as a memory scrapbook, each place I go back to, a page from my childhood or youth.  There are some that have remained just like I remembered them, but others have changed, or disappeared. One place that I frequented was La Torre Manacar (the Manacar tower), at the corner of Insurgentes and Río Mixcoac Avenues; it featured one of the largest movie theatres and screens in the city. My high school was down the road from there, so “El Manacar”, as we called it, was a natural meeting point; I recall seeing big hit movies such as “Rocky II”, or one of my favourites from back then “Coal Miner’s Daughter”.

In a nut shell, the original building was inaugurated in 1965, a project developed by Manuel, Antonio and Carlos Santacruz, who named the 16-story tower after a composition of letters from their first names: Man, A and Car. Next to the tower (which housed mainly office and parking space), was the large Manacar movie theatre, with a capacity of close to two thousand people, as well as a small Sanborn’s store (click here to see photos). The structure suffered some damage during a huge earthquake in 1985, and even after repairs, it never recovered.  It was later closed, and then a fire in 2013 finally condemned the tower and theatre for demolition.  The late Teodoro González de León (1926-2016), a celebrated Mexican architect, created the new concept, a 29-story tower with eleven floors below street level, to house office space, a smaller movie theatre and a multi-level shopping centre. It was inaugurated in 2017. Last March I took a few photos of the building; the fountain/name sculpture is pictured at the top of the post, and two others are over imposed below, because it was not possible to get the whole building in one shot from that angle, at street level:

My dear friend Adriana treated me to dinner at the shopping centre, so I also got to see it from the inside: 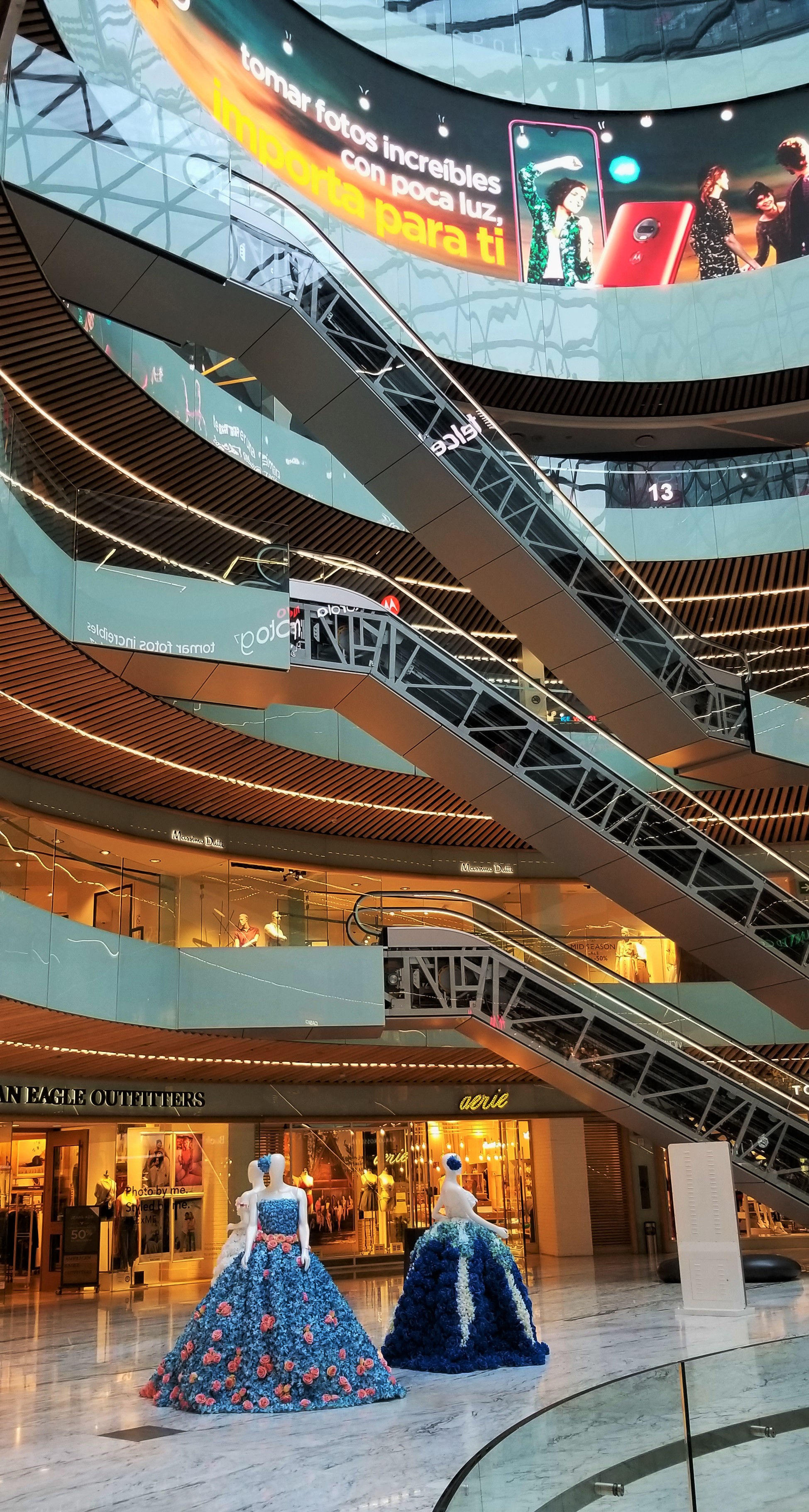 I was in awe by the size (height!) of the place, and so surprised to see a lot of the multinational brands that were not available in Mexico a few years ago.  I also found that shopping malls and centres are still booming there, while in many places, they are suffering a solitary decline, barely keeping alive, or closing down.  Our visit took place on a weekday, so it was not particularly busy, but all the stores were open and the restaurants had a fair number of patrons, so hopefully the new Torre Manacar will not have an ephemeral existence*.

There was a nice selection of eateries: Argentinian grill, Sushi bar, even a Chili’s™! It was my first meal in the country, so of course we ate at an authentic Mexican restaurant, “La Cervecería de Barrio™”, a chain that started – as described on their website – as a “small place inspired by traditional seafood stands inside markets.”

I thought their logo of a sleeping stray dog – ubiquitous in old food markets and stands – was a cute touch.  Their whole menu looked truly tempting; we settled for a variety of appetizers and antojitos (little cravings):

Everything tasted even more delicious than how the descriptions sounded on the menu, and the selection of house spicy salsas was great:

It was a close call, but I think my favourite was the seared fish tostada.

Back home in Canada, I was still dreaming about that tostada when I noticed a board outside an organic food store, advertising their new offering: sushi-grade tuna; I could not believe my luck! It is hard to find reliable sources of fish around here, in general, and I would not trust to prepare it raw or partially cooked, but because the label “sushi-grade” requires treatments at temperatures low enough to guaranty killing bacteria and parasites, this type of fish may be eaten raw, or in my case, just seared.  In my next post, I will be sharing my rendition of Seared Tuna Tostadas.

* Update May 2021:  The shopping centre is still open, but sadly, the featured restaurant is now closed permanently.  However, the chain still operates several other restaurants around Mexico City and Edo. de México.