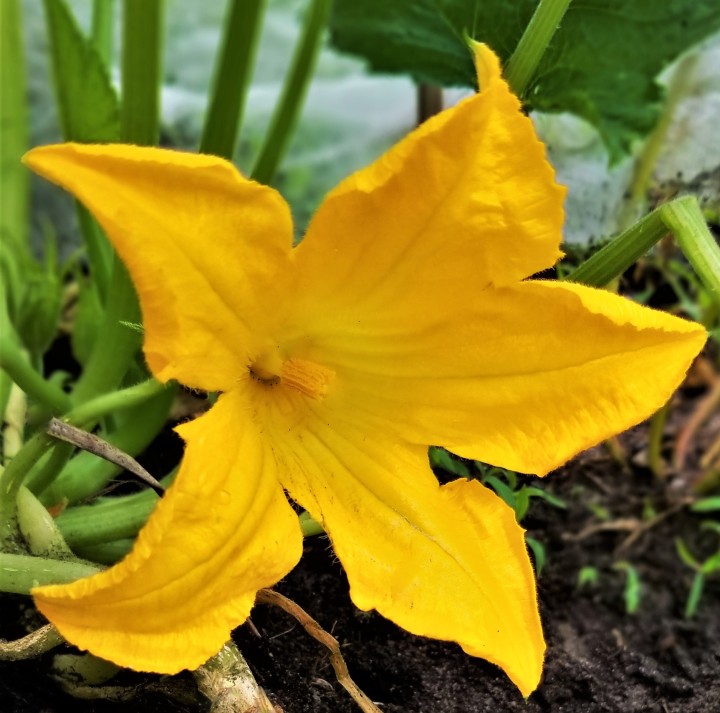 The species Cucurbita pepo includes several edible winter and summer squash varieties, such as pumpkins, acorn squash, scallop, vegetable marrow, zucchini and tatume; archeological evidence in Mesoamerica, and specifically in Mexico, shows that varieties of C. pepo were probably first domesticated there, and have been grown for the past 8,000 to 10,000 years.   The plants are very prolific and each one produces both female and male blossoms; the male ones appear first and in greater numbers to optimize pollination of the female flowers, from which the fruit will grow.  With their bright yellow/orange blossoms, zucchini  (see photo at the top of the post), and other summer squash, are the kingpins of early summer; they attract pollinators, and are also pursued for human consumption, prepared in soups, stuffed, stir-fried and as filling for quesadillas.

I usually leave most of the female flowers alone, and a few of the male ones, so pollination may take place without too much strain for the plant.  When the first male blossoms appear, though, I jump at the opportunity to pick a couple and place them on a soft tortilla, along with some cheese and greens (epazote in the photos below, but swiss chard is a nice choice, too); grilling over very low heat, it appears like the cheese is softening in a very dilatory fashion, but when it finally melts, the result is worthwhile the wait, folded into a delicious quesadilla:

The way to differentiate female and male blossoms is by first looking at their stems; the male have a long and thin stem, while the female show a bulbous and shorter base and, as mentioned before, the male blossoms appear first: 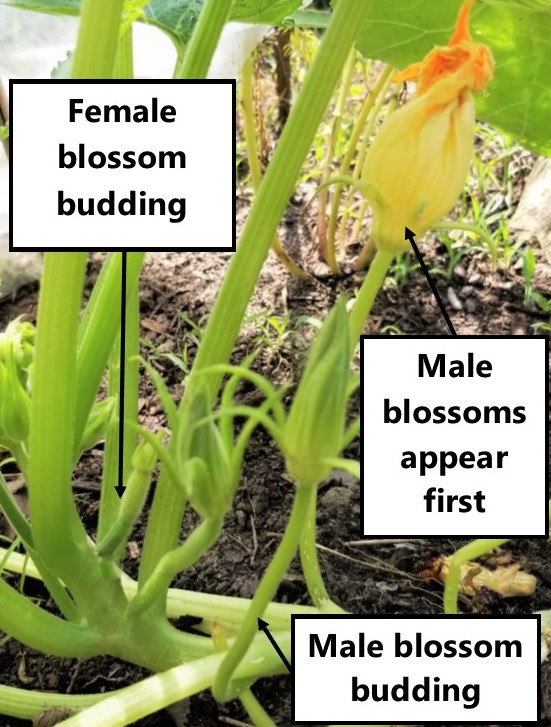 Further confirmation comes from looking at the centre of each flower; the photo at the top of the post shows a male flower in bloom, with an elongated stamen, while the photo below, shows a female blossom (from my harvest in 2016), with a rounded stigma:

Each blossom will have a few hours of exposure to bees and other pollinators during the day, then close and wilt nightly, like the male one marked on the picture.  This cycle repeats, and eventually female flowers receive pollen when insects pay a visit after they have stopped by a male counterpart.  It seems unlikely to coordinate the fertile hours of each the male and female flowers with a fortuitous visit to both (in the right order, male first) by a pollinator; it definitely happens, very frequently in fact, and hence the many jokes about, and tips on what to do with, a bountiful zucchini harvest by midsummer.  Hopefully I will have an update on my summer squash in a couple of weeks; in the meantime, just look at the longest zucchini I harvested in 2016: 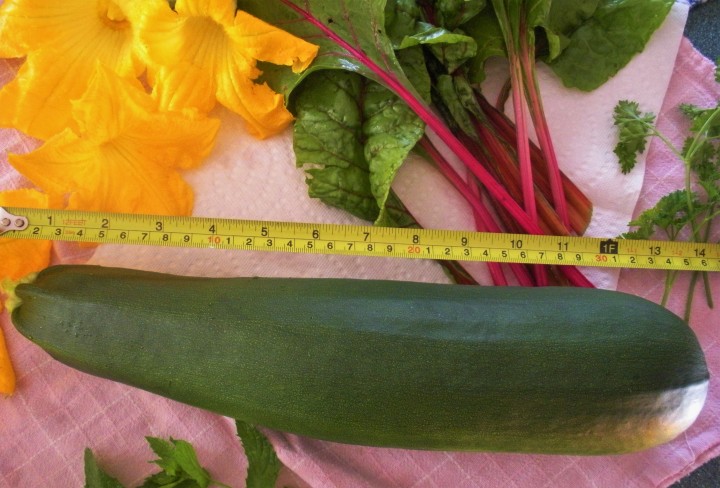 That sure provided enough for nice platters of my Picadillo and Three Sisters Stew!

6 thoughts on “Flower of the Day – Cucurbita Pepo”