In a previous post, I described how I enjoyed my first squash blossom of the season, cooked with herbs in a quesadilla.  As the season has transitioned to (much) warmer temperatures, there are more flowers opening every day:

As I mentioned in that post, the female flowers are generally left on the plant to be fertilized and grow fruit, but there are usually more male flowers than necessary for pollination, so a few may be snipped when they are fully open and used in the kitchen (click here for how to differentiate female and male squash flowers.)  I used to pick flowers at random from all my squash plants; pumpkin and zucchini flowers are good (both are varieties of Cucurbita pepo), but I have found that, although edible, flowers from other squash species such as Kabocha (Cucurbita maxima var.) have a soapy or bitter aftertaste, at least to me, so now I stick to C. pepo.  There are many Mexican dishes that call for squash flowers (flor de calabaza), such as soups and stews; in this recipe, though, they are just briefly cooked and wrapped in a plain corn tortilla, to feature their delicate flavour.

Ingredients (quantities for one taco, multiply accordingly for more)

Wash and drain flowers.  Remove stem, sepals and central stamen; discard.  Separate the petals and base into sections:

Slice cleaned flowers into ribbons (photo below, left); three flowers measured approximately 1/4 cup, placed next to one tablespoon of finely chopped onions in the photo below, right, as comparison:

Warm up oil in a pan over medium heat; sauté onions until translucent.  Turn heat off, then add the flowers and stir quickly (photo below, left).  If using fresh herbs (such as epazote or thyme, pictured below, right) chop and add at this point:

I did not add any in this case.  Remove from the hot pan promptly as soon as the flowers have started to wilt.  Transfer to a warm corn tortilla and sprinkle with salt, to taste (photo below, left); as an option, this taco may be spiced up with a fresh serrano pepper before rolling (photo below, right):

Or roll just with the squash flower filling inside, and serve some slices of serrano pepper on the side: 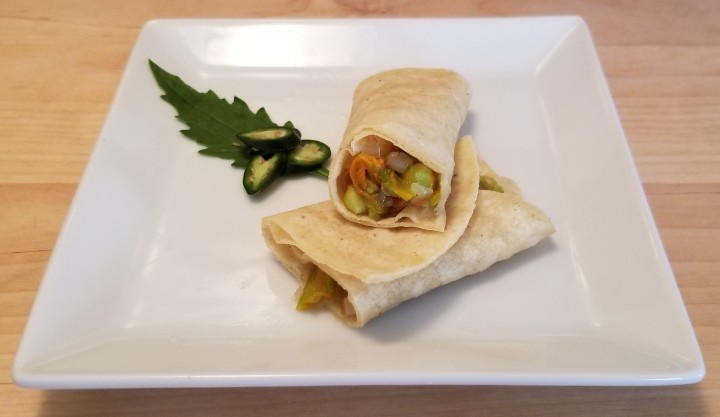 I think that focusing on preserving the squash flowers with a very brief cooking time after sautéing the onions, and enhancing their flavour with a pinch of salt, while leaving the herbs and serrano peppers aside, prevented masking the flavour of this taco’s star ingredient.  I would like to dedicate this post to Eilene @ Myricopia; she tried making the squash flower quesadilla from my other post, and commented that the mild squash flower flavour got lost with the other veggies, so that made me brood over the need to share this simpler recipe.

I am joining Fiesta Friday #287 with Angie @ Fiesta Friday, hosting this week with Jhuls @ The Not So Creative Cook and Rita @ Parsi Cuisine.