Another one of my new-to-me crops this year was salsola (Salsola komarovii), a potherb originally from Japan; it caught my attention in the seed catalogue  because it looked a lot like the Mexican potherb known as romeritos (Suaeda spp), which grows mostly around the salty lake areas outside Mexico City.  Their characteristics are similar, as well: both are part of the Amaranthaceae family, resemble a seaweed, and grow in salty soil, for which salsola is also known as saltwort, and its Japanese name, Okahijiki, literally means “land seaweed”. I have never seen it in Canadian markets, but I read that in Italy, the species Salsola soda is known as agretti or roscano and, although grown for centuries, it became a neoteric sensation everywhere around 2014, after famous celebrity chefs cooked with agretti on their shows.

I started my salsola seed in a pot, just to have better control of the growing environment (salsola seeds need heat to germinate), and also to make sure I would be able to identify the sprouts, since I did not know what they would look like. I was glad I took that measure, because at first they just looked like any grassy weed, wagging in the wind.  By mid June, after a couple of weeks of being transplanted to the ground, they started to branch and looked more distinctive: 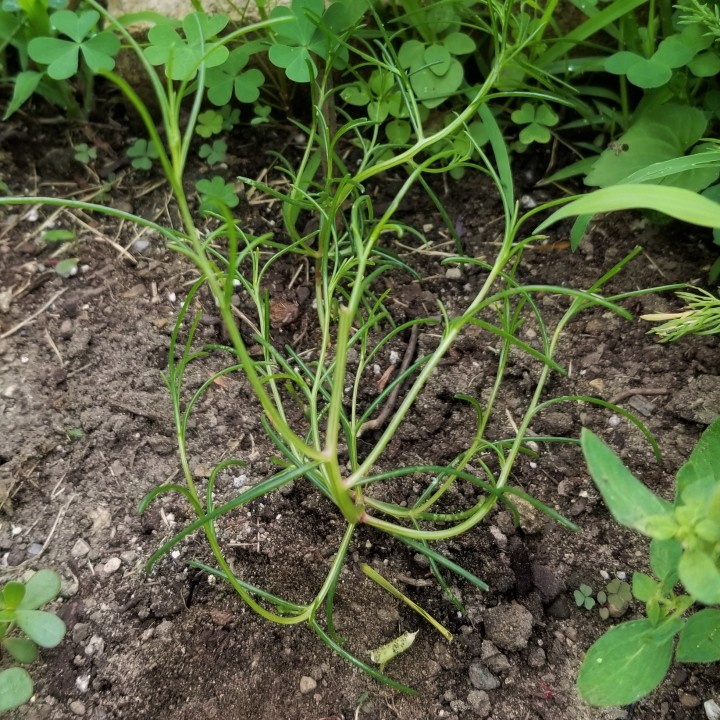 The photos below show harvests in July (left) and August (right):

They continued growing very rapidly and, by late September, they were starting to produce buds (photo below and at the top of the post): 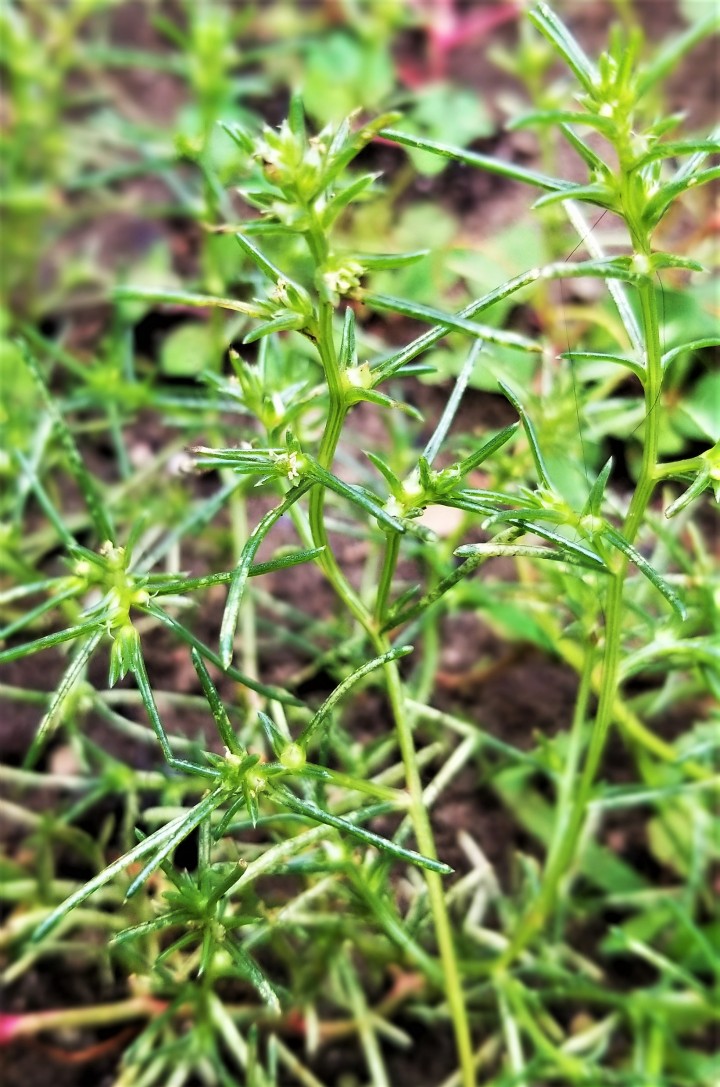 That meant that the window of opportunity for harvesting was coming to and end.  Now, in Mexico, romeritos are cooked traditionally during the Christian seasons of Lent (in the spring) and Advent and Christmas (in winter) in a dish with red mole and other ingredients.  I tried freezing a few sprigs to see if I could save my salsola until Christmas time, but they did not fare well, as it may be appreciated in the photo below, showing the thawed sprigs all wilted and blackened on the left, next to some fresh sprigs from the same batch, on the right:

I decided to cook the rest of my harvest and worry about timing of my dish later. Salsola may be eaten raw when it is very young, but the best flavour comes out after boiling the mature leaves and stems in plenty of water; no salt is needed, since the plant already has a salty flavour. After cooking for about five minutes, I drained them and this is how they looked: 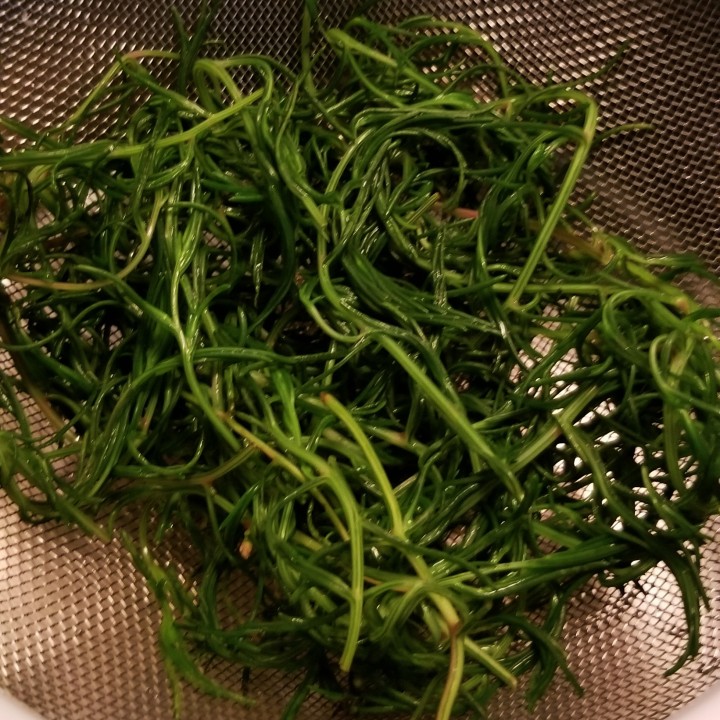 They looked very similar to the way I remembered cooked romeritos in Mexico! Now that my salsola was cooked, I decided to be daring, bag and seal some, and just leave them in the freezer until the holiday season, hoping for a well-preserved batch this time.  I might not get a bravery medal, though, because I only packed half, thinking that I should at least enjoy some, in case the frozen part does not survive.  In Italy, they are often seasoned with olive oil and a touch of wine vinegar, either paired with anchovies or bacon, or as a side for a meat dish. In Japan, I imagine them dressed with soy sauce and rice vinegar, mixed with a hint of sugar, served on their own as a side, along with other veggie and protein dishes. That is how we enjoyed my garden salsola at the end of August: 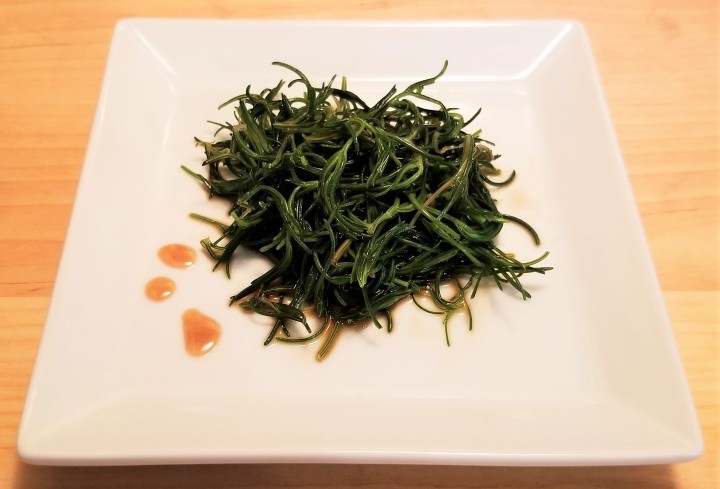 I shall come back to the frozen batch next month, and hopefully will be able to write about how I cooked them as “Romeritos in Red Mole” for the holiday season.

FunFact: from “Will you ever taste agretti again?” The Telegraph UK March 2015:

“Historically, Salsola soda [a species of salsola herb] was burnt into ashes and used as a vital ingredient in the making of glass and soap.  Those who cherish their objets d’arts from the Venetian island of Murano might be surprised to learn that gourmets take as much pleasure from eating it as a crunchy accompaniment to fish, as they do looking at it when turned into a figurine.”