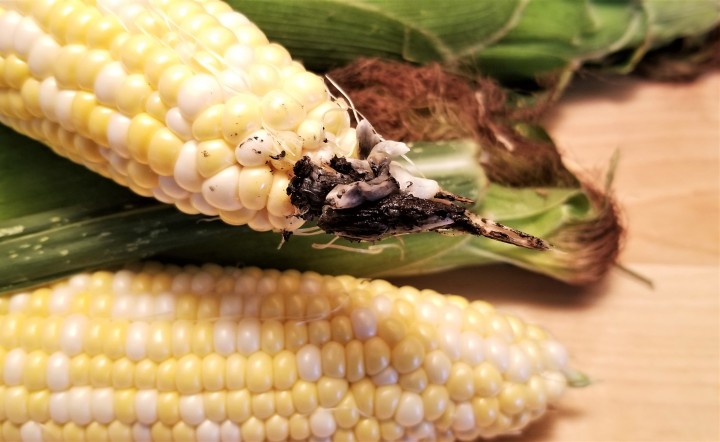 One of the pleasures of late summer and early fall, is to purchase freshly harvested ears of corn (maize) from local farms, either by the side of the road, or at farmers’ markets and other small produce businesses: 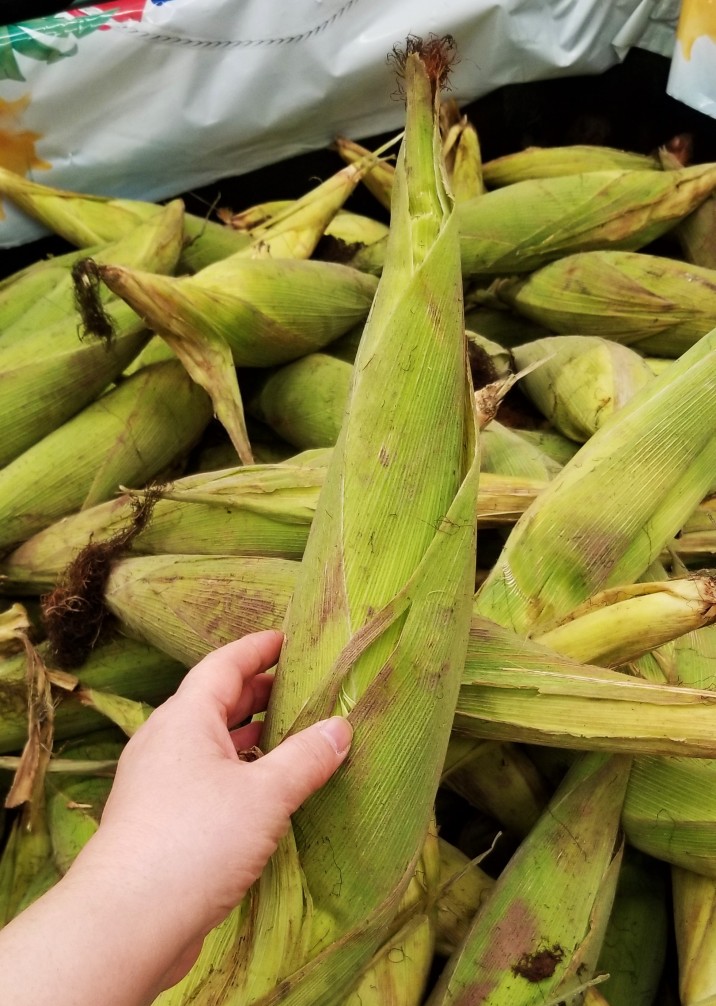 Here in Southern Ontario, it is normally possible to remove the husks in site, but due to the pandemic, the ears are now sold intact, as they were harvested from the plant.  While peeling a batch at home last week, I found one ear that had a peculiar grey-blackish mass at the tip:

It was a small colony of the fungus Ustilago maydis.   Spores of this fungus may be transported easily by wind, landing on developing corn and entering the ears usually through unpollinated strands of silk, or wounds caused by heavy rain or hail.  The fungus grows, enveloping corn kernels and forming a growth called a gall, initially with a light grey colouration, turning into inky black as it reaches maturation (as shown above).

In Mexico, finding corn smut is a prize, and ears with the swollen, grey and black galls have been harvested and consumed as another edible corn product since pre-Hispanic times; it is known as huitlacoche (pronounced “whee-tla-ko-cheh”), also spelled cuitlacoche, which comes from the Nahuatl roots cuitlatl – excrescence or growth, and cochtli – sleeping.  The huitlacoche galls are removed from the cob, then cooked with chopped onions and the Mexican herb epazote, and added to traditional casseroles or corn dough (masa) dishes, such as tacos and quesadillas.   It tastes surprisingly mild at first, then an emphatic burst of rich earthy flavour takes over, ending with a sweet note from the remnants of the engulfed corn kernels.   Fresh huitlacoche is a seasonal product that becomes available as the corn crops develop in the fields; it does not keep for very long, and is mostly sold at local markets and produce stands, but occasionally found packaged in the produce section at supermarkets: 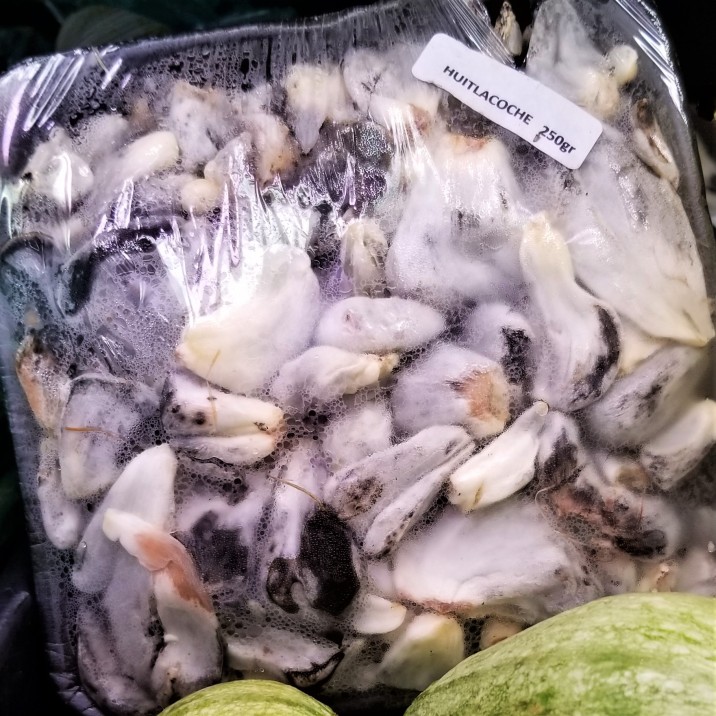 A package of huitlacoche galls at a supermarket in Mexico (2019)

In many other countries, including the United States, this fungus is known as corn smut, and it is considered a blight, so fungicides are applied to corn (maize) crops to prevent its development.    However, the fungus is a good source of protein, with a high content of essential amino acids, such as lysine, which are not present in uninfected corn.  Farmers have also found that, when sold to the specialty food market, huitlacoche has a much higher profit margin than corn.  In 1989, huitlacoche first gained national attention in the US, when it was branded as the “Mexican truffle”, and featured in a special feast at the James Beard House in New York City.  Nowadays, gourmet Mexican restaurants offer huitlacoche dishes in some American cities, such as Rosa Mexicano in New York, NY, and Washington, D.C. amongst others, or  Aquí es Texcoco, with several locations in the state of California.

In Canada, The Saville Laboratory, at Trent University, in Oshawa, Ontario conducts research projects focusing on “Genomic Approaches to Mitigate Fungal Threats to Crops (GeM-FTC).”  The Common Smut of Corn (Ustilago maydis) has been studied both as a disease (which apparently has in some cases devastated up to 25% of corn fields in Ontario) and as a commercial crop, directed to farmers’ markets, restaurants, and specialty grocery stores with the name of huitlacoche, or “corn truffle.” The most recent entry on huitlacoche on their website is from 2014, in which the lab collaborated with the Fleming College Culinary Program to present an innovative menu featuring dishes such as “Huitlacoche risotto with red onion marmalade”, and “Huitlacoche ravioli with crispy prosciutto”, as well as honey pickled huitlacoche in a jar, an interesting alternative to the standard canned huitlacoche (as seen at the bottom of this post.)   A year later, The Farmers’ Market website in Downton Peterborough, Ontario posted a blog entry in August 2015, advertising the “Huitlacoche Project” in which “… guest chefs, growers and researchers will be showcasing this unique product, giving customers recipe ideas and the chance to sample some, too.”  It was presented as a collaboration between Trent University, the Fleming College Culinary Program, and a local restaurant owner.  The photo below, showing a few good examples of huitlacoche still on ears of corn, was taken from that post:

The last reference to the “Huitlacoche Project” I found was from McLean’s magazine in 2016, reporting that the Saville Lab was not drained of ideas to promote the “delectable corn fungus”, and still trying to find a niche with market farmers and restaurants.  I have never seen fresh, canned, or bottled huitlacoche sold around here, but I hope that the effort continues to bring huitlacoche, “the Mexican truffle”,  to a broader market in Canada.   I think that promoting Mexican dishes with huitlacoche could be very effective, since many recipes have been honed to perfect seasoning over centuries.

For me, finding that small clump of huitlacoche in my Canadian corn inspired this post; it was too small to cook anything with it, but gave me hope that I might find fresh huitlacoche in Canada some day.  There are many species of smut, some toxic, but there is no huitlacoche look-alike growing on corn, so other than possible allergies as with any foodstuff, if you are ever lucky enough to find it on your fresh ears of corn, it should be inconsequential to pick some for consumption.  According to Eat The Weeds, look for galls while they are “silvery-white covered by a thin greyish skin” because as the fungus ages, the galls harden and then rupture, spreading a powdery spore mass, becoming not palatable.  Clean and simply sauté fresh huitlacoche with some onions (epazote herb, if available), and tuck it in a tortilla for an earthy, mushroom/corn flavoured snack.

Canned huitlacoche is sometimes the only available option; I brought a small can from Mexico last year: 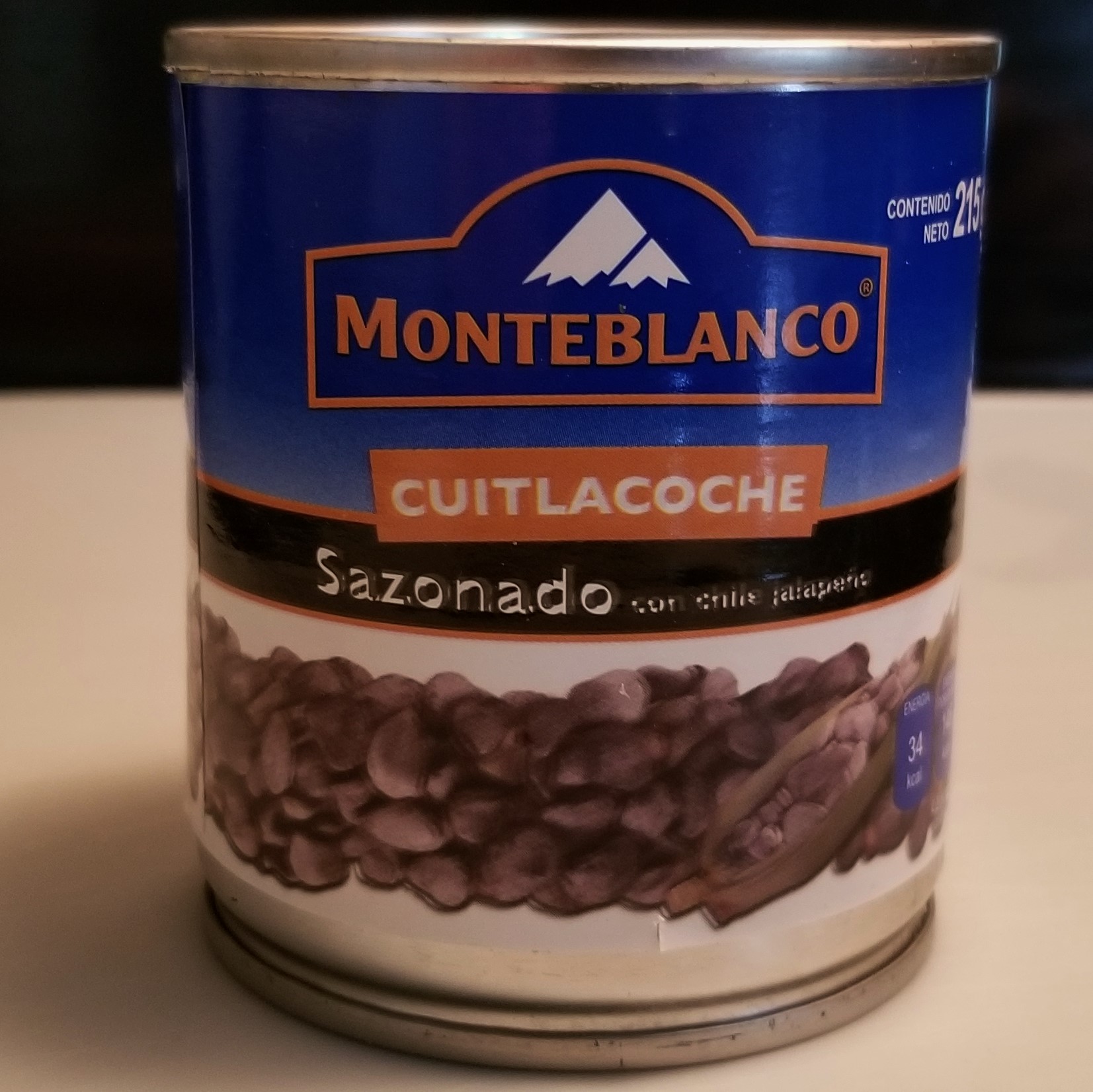 Stay tuned to see my contribution towards promoting the delicious and unique huitlacoche, with a recipe in my next post…

11 thoughts on “Huitlacoche – The Mexican Truffle”