Above: A candid picture of Esthercita (centre) and her roommates, doing chores at their boarding school dormitory (Naborito, Japan, circa 1941.)

My mom would have turned 93 years old this month; last year, shortly after her passing, I shared some stories and recipes from her childhood in the small mining town of Agujita, in the Mexican state of Coahuila (click on highlighted text for Part 1, Part 2, and Part 3).  To continue celebrating her life during her birthday month, I would like to share one more story and recipe.  As a child, I heard these and many other anecdotes, sitting with my mom in her kitchen, which filled my imagination with picturesque scenes of Mexico (and other countries) and inspired me to always strive to move forward, and never stop learning. Thank you, mom!

It was the year 1939, and Esthercita (my mom, a Japanese descendant) had completed her elementary school education at “Art. 123 Amado Nervo Public School” in Agujita, Coahuila.  Back then, there were no middle schools in town, so her parents had decided to send her to a school in Mexico City, and stay with a cousin.  Around that time, it just happened that some friends, another Japanese family, came to say goodbye from the neighbouring town of Allende, since their teenage daughters were going to a boarding school in Noborito, a small town south of Tokyo, Japan, early the following year.  My mom got very excited, plotting that, instead of Mexico City, maybe she could go to Japan with her friends; she then began a relentless campaign to convince her parents.  It was a taxing endeavour; her mom was particularly concerned about the situation in the world, with Japan already engaged in a war against China and of course, a serious conflict brewing in the Pacific, but she conceded in the end.  Since the family had the plan to sell their business in Mexico (a general store) and go back to Japan for good in a couple of years, it also made sense to send Esthercita ahead, so she could start learning the language and get acquainted with the culture.  The chaperons for the trip were a childless couple, who lived in neighbouring Piedras Negras, Coahuila.  The couple had originally planned their trip to attend the 1940 Olympic Games in Tokyo; by then Japan had forfeited the honour due to the war with China*, but the couple decided to still go to Japan to visit their family and honour the promise to safely take the children to their destination.

After a few months and a lot of planning, in early February of 1940, my grandfather stayed home with my mom’s three younger siblings and my grandmother and my mom were on the bus to Piedras Negras at 6 am; the bus route crossed Comercio St., right in front of the family’s home and store “La Japonesa” (“The Japanese”),  so they waited by the curb outside the house.  The bus made several stops: first Rosita and Nava; then Allende, a larger town, almost a city really, where agriculture was strong and they had large crops of sweet potato.  Finally, after six hours, they arrived in Piedras Negras around noon.   The rest of the group was there already, and they crossed a bridge on foot all together, over the Rio Grande (Rio Bravo) to the American town of Eagle Pass, Texas.  They had lunch there and then went shopping; since St. Valentine’s day was approaching, there were many fancy heart shaped boxes of chocolates, wrapped with shiny red bows, and stores where decorated with big hearts; that holiday was not known in Mexico at the time and my mom was in awe at the variety of products in the stores, as she had never been to the United States.

My grandmother had to say goodbye and go back to Agujita, and my mom knew she was not going to see her or the rest of the family for a while, but probably a year at the most, just until they could sell the house and store, and then reunite in Japan.  My mom and her party continued by train to California, in the US Pacific coast, and arrived by boat in Yokohama, Japan, in March of 1940.  The first few months were exciting and filled with corybantic adventures and discovery, both at school (Mizuho Gakuen ) and the dormitory (Ume Ryo) . 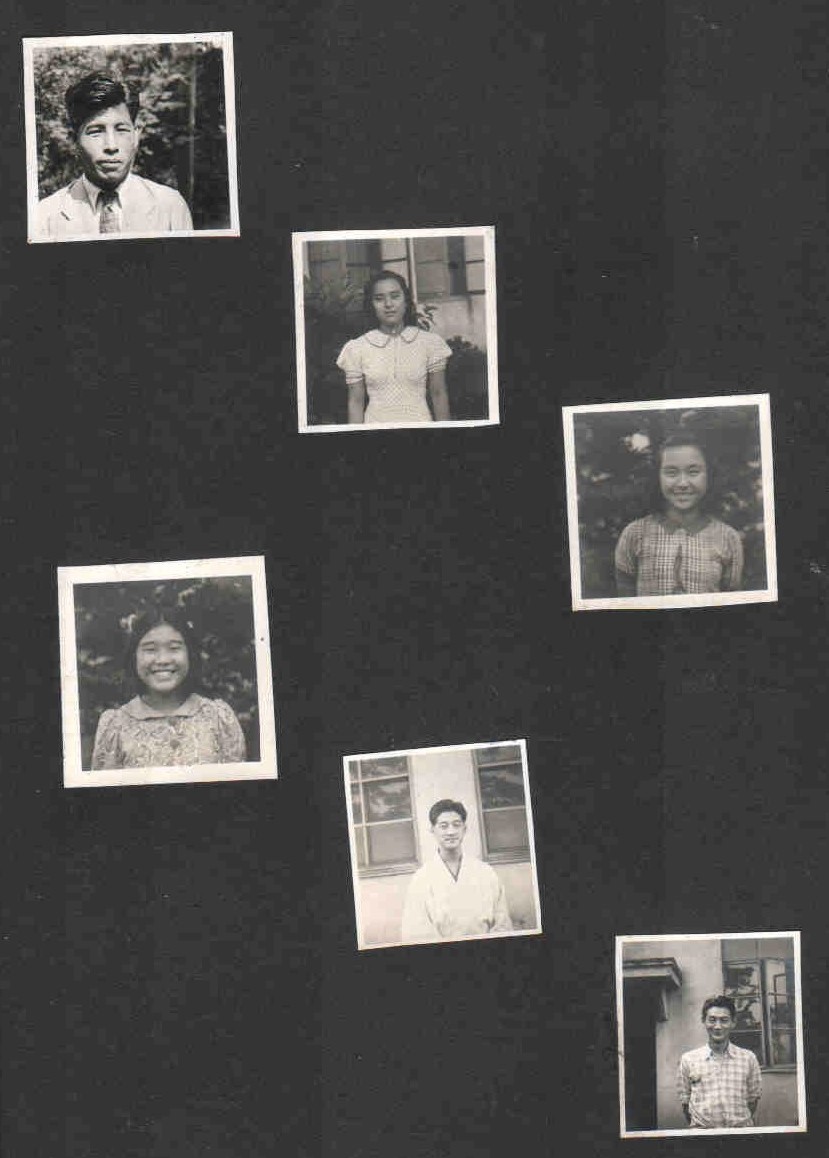 Above: My mom’s picture (girl on the left), her friends from Allende (other two girls) and other students from the yearbook Mizuho Gakuen Ryoyukai, 1941.  My mom’s photo caption reads: ” A loving smile, a prudent look, that no one could overlook.”

She was still at the boarding school when in December of 1941, the principal shared the report on the radio announcing that Japan had attacked Hawaii (Pearl Harbor) by surprise, with no formal declaration of war against the USA.  Mexico later entered the war, in May of 1942, after Germany sunk two Mexican oil tankers on their way to the US.  My mom spent WWII in Japan, ensconced with relatives and friends, and as a young adult, she worked in Tokyo with the Americans during the occupation, until she could get a Mexican passport; her family never made it to Japan, and had been forced to move to Mexico City during the war, so they finally reunited there in February of 1949, not one, but almost exactly 9 years after my mom and hers had said their goodbyes.

* NOTE: The 1940 Summer Olympic games were ultimately cancelled because of WWII.  Strangely, exactly 80 years later, Tokyo has postponed the 2020 Summer Olympic games, due to the current pandemic (will they be ultimately cancelled, too?)  I find it even stranger because, first, my mom left in February of 1940 to go to Japan by herself, and Tokyo was supposed to host Summer Olympic games that year, which did not happen due to a global crisis;  now, one of my daughters left in February of 2020 (almost exactly to the day, 80 years after her grandmother) to work in Japan, and the Tokyo Summer Olympics again did not happen due to a global crisis.  Of course, my daughter is a young adult, and we have internet, as well as commercial planes, and all sorts of modern communication systems, but the similarities are still remarkable.

My mom told me that during her bus ride to Piedras Negras, many vendors were offering food at the stops, probably because of the variety of agricultural products in the region, and the high traffic of travellers on their way to the US border.  She remembered in particular that in Nava, some women were selling patties filled with spiced pumpkin and sweet potato out of their wicker baskets.

These patties are traditional in Coahuila and other Northern Mexican states, such as Sonora.  The dough is somewhat special, since it is spiced with cinnamon, and risen with yeast, resulting in a soft and fluffy pastry, with a good dose of wonderful fall scents and flavours.

13 thoughts on “Esthercita in Coahuila – Part 4”