Huauzontle  (Chenopodium nuttalliae) was one of my featured crops last year; this tall plant is native to Mexico, grown mainly for its edible seed heads, which develop from inflorescences.  The plant turns bright red in the fall, as shown in the picture at the top of this post, which has given huauzontle the name of Red Aztec Spinach.  Last year I was in Mexico around this time, so I harvested my huazontle in September; the stems were still tender, and I made the pertinent preparations to cook them whole with the seed clusters still green, in Mexico’s traditional way, as capeados (coated in an egg batter).  After my trip and back in Canada, and by the time I had a chance to check on the plants, they were already drying, so I left them alone, allowing them to go to seed.  In the spring this year, I got many volunteer sprouts from that seed, and they grew very differently from last year’s crop.  In the pictures below, a comparison between them, at around the same time of year; on the left, a 2019 plant, showing small inflorescences and lots of branching, while the 2020 crop, on the right, has many stalks with well developed seed heads and growing mostly vertically:

As it may be appreciated, the 2020 crop was already turning red back in September.  I cooked some more capeados, but there were so many stalks that I left about half to continue growing, and by mid October they were fully matured and bright red:

I harvested a nice bunch of branches with dense seed heads:

After washing, I boiled the branches in plenty of water for fifteen minutes: 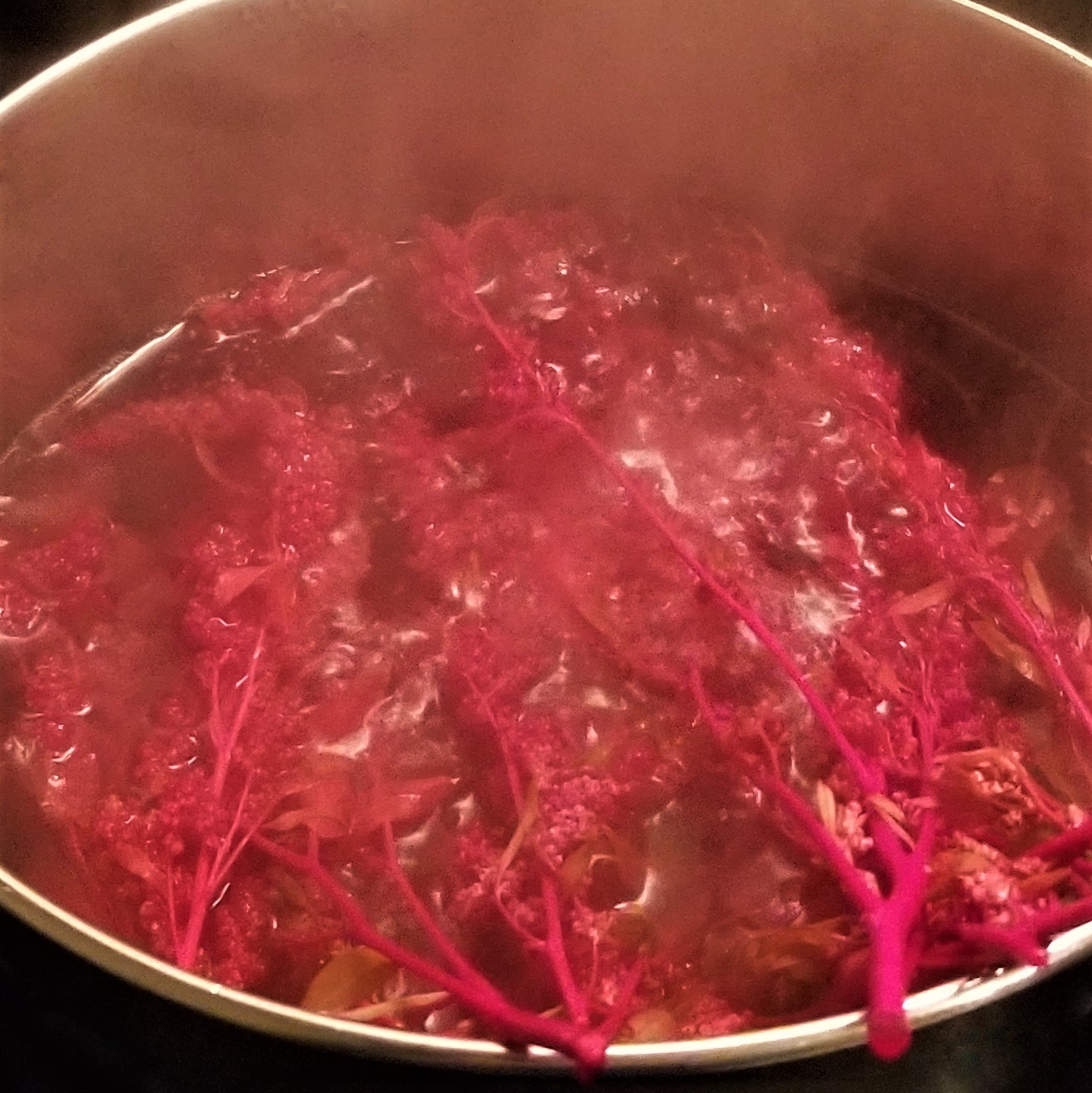 After draining, the colour of the huauzontle branches was not as intense, but still sported a nice shade of pink:

I could have removed the toughest branches at the bottom and cooked the seed heads whole, but I decided to collect the coated seeds (called achenes) by themselves, holding each stem by the bottom with one hand, and scraping seeds and leaves along using a fork, with the other:

Leaves are also edible, so a few tender leaves are fine. My bunch of huauzontle yielded about one cup of cooked seed (photo below, left).  I realize that mature huauzontle would probably be available only if grown locally, so for the following recipe, improvising with cooked quinoa (Chenopodium quinoa), a relative of huauzontle, would prove a good substitute; one third of a cup of dry quinoa, added to half a cup of boiling water and simmered for 15 minutes, yields approximately one cup cooked (photo below, right):

Ingredients (for one dozen)

1 cup cooked huauzontle seed (if not available, use cooked quinoa)
2 eggs
1 cup shredded melting cheese, such as Quesillo (Oaxaca style), Chihuahua, mozzarella, etc.
½ tsp salt, or to taste
Vegetable oil, as needed
To serve: sauce of choice, such as caldillo, red mole or green sauce (click on names for my recipes)

Separate egg yolks and whites.  Beat egg yolks in a small bowl until uniform; set aside.  Beat egg whites in another bowl, until foamy, then add reserved yolks, and lightly beat together (photo below, left).  Once uniformly mixed, add salt, cooked seeds and shredded cheese (photo below, right):

Incorporate everything by folding lightly, so the batter remains fluffy.   In a large frying pan, pour enough oil to cover the bottom, and warm up over medium/high heat.  Carefully drop portions of batter in the oil by the spoonful, rounding the edges with the spoon, as they cook (photo below, left).  After a few seconds, once the bottom has turned golden brown, flip the patties using two spatulas (photo below, right):

Once browned on both sides, transfer patties to a plate lined with paper towels, to absorb oil.  Repeat with the rest of the batter, cooking in batches to avoid crowding in the frying pan.  Serve patties with a side of sauce, for dipping; in the photo below with caldillo:

The outside was crunchy, with some shinny spots from crisped bits of cheese, and the inside had a mix of squishy seeds and gooey cheese.  My husband does not like the slightly bitter aftertaste of quinoa and huauzontle, and generally avoids fried foods, so I was expecting an empty room when I called him to the kitchen to try these patties; to my surprise he loved them, and I got an empty plate instead!

I thought I would try including a Nutrition Facts chart at the end of my recipes; let me know if this is helpful:

There are still a few plants in my garden, drying and going to seed; hopefully they will produce another nice crop next year (photo below, taken on October 28, 2020): 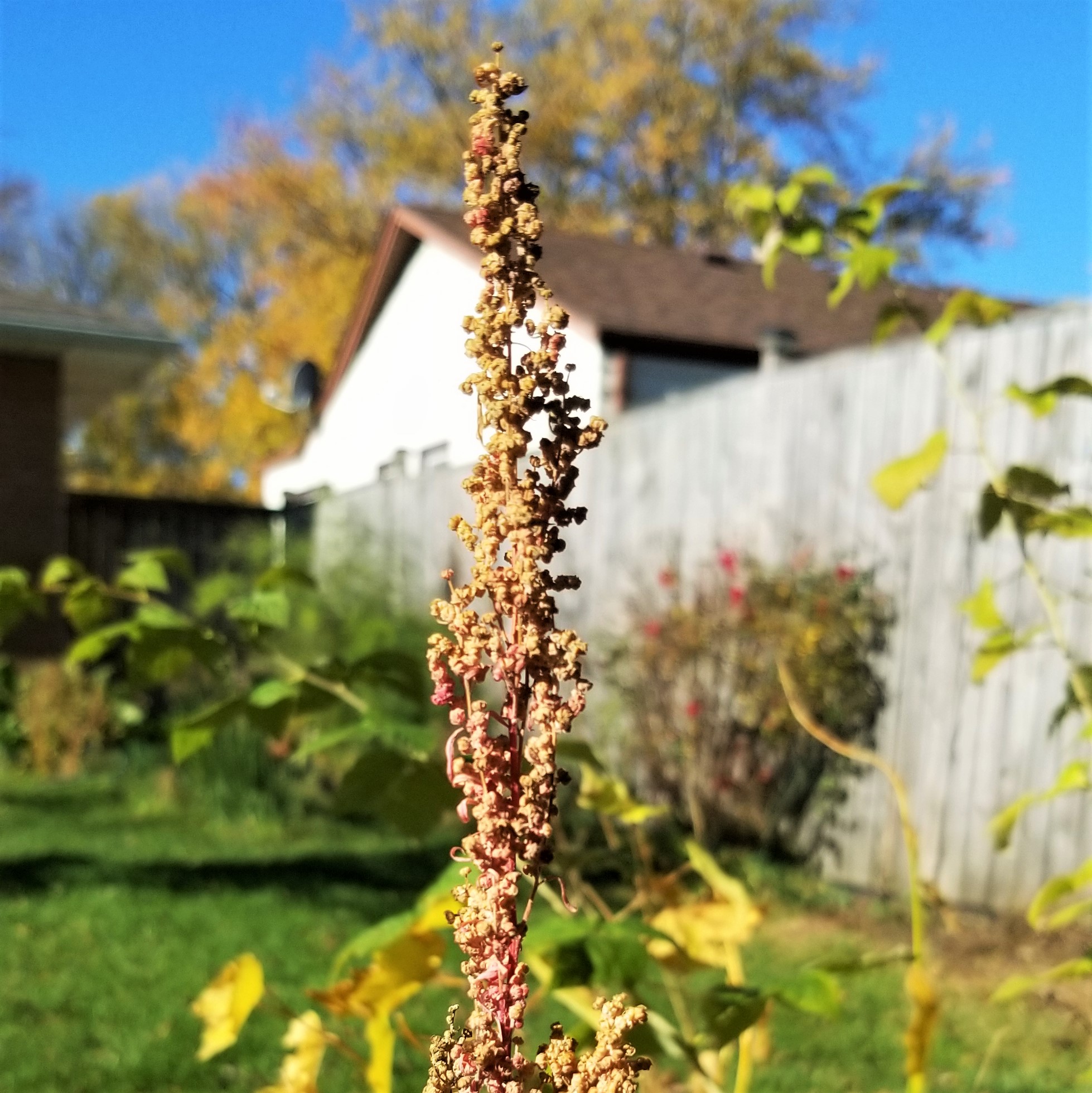 Huauzontle seeds are sometimes confused with amaranth (Amaranthus sp.), another relative of huauzontle, as well as quinoa; all three have been consumed as grain substitutes (annexed in the group of pseudo-grains) in Mexico (the first two) and Peru (the third) since pre-Hispanic times.  In the photo below, a dry huauzontle stem with seed, in the centre, compared to amaranth seed (left) and quinoa seed (right):

I am bringing my recipe to Full Plate Thursday #508 with Miz Helen @ Miz Helen’s Country Cottage.