I had a small bunch of huauzontle (Chenopodium nuttalliae) seed heads, leaves and tender branches from my backyard crop: 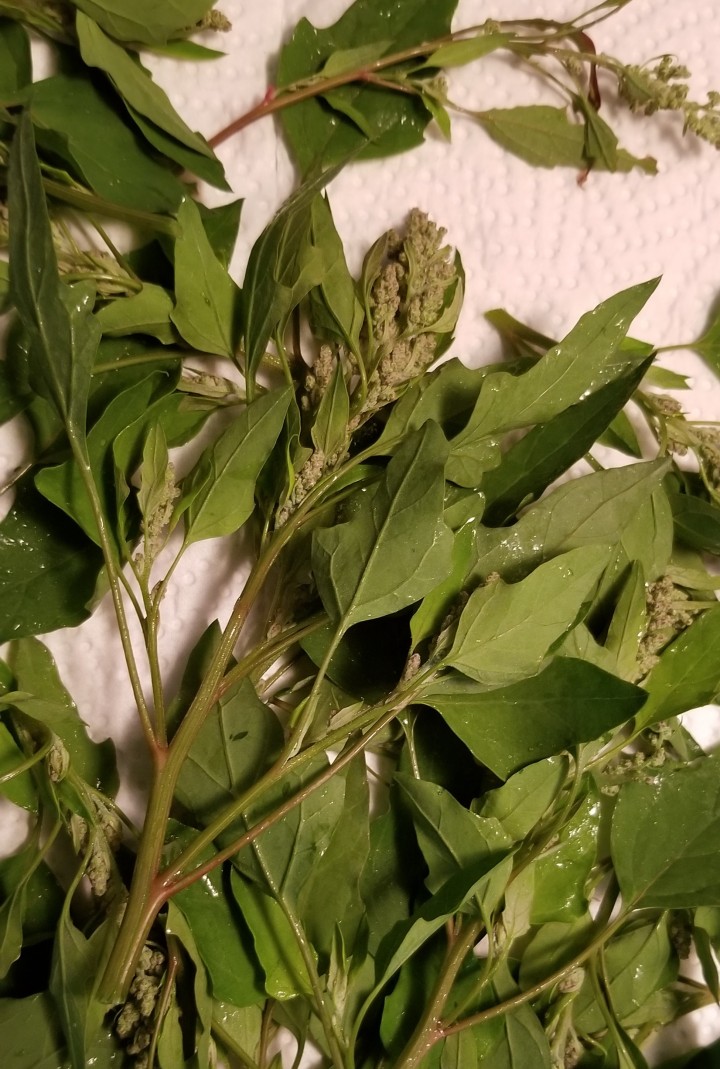 As I mentioned in my previous post, these are very small compared to the huauzontle branches sold at Mexican markets: 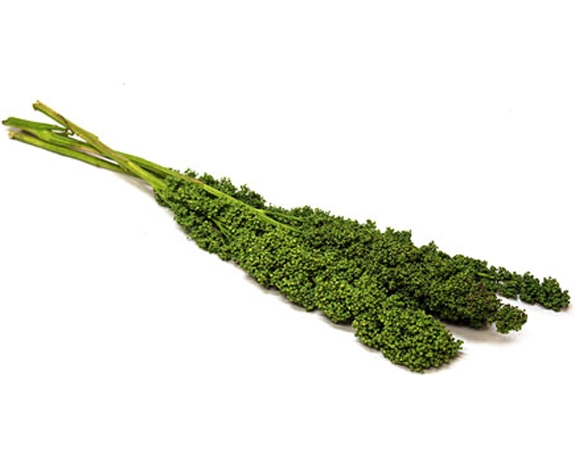 However, they are still edible, and I did not want to waste them on their debut year in my garden bed.  They also have the advantage of having branch stems tender enough to be edible as well, whereas the ones pictured above would have to be either removed in the kitchen while cooking, or at the table, while being eaten, similarly to eating a whole fish with bones.  The leaves are also removed, as seen in the photo above, but since my huauzontle seed heads are so small, I left the edible leaves on, as well.

Although there are some companies in the USA specializing in Mexican produce that carry huazontle, it is generally difficult to find outside Mexico, and I have never seen it sold in Canada; some people compare it to broccoli (Brassica oleracea var. italica), but I think it would be closer to broccoli rabe (Brassica rapa rapa) a variety of turnip grown for its tops and florets, with a hint of bitterness, not unlike huauzontle, which is in the same family as quinoa.  If huauzontle is not available, I would recommend trying this recipe with broccoli rabe (NOTE: it is also known as rapini, but it is not the same as broccolini, Brassica oleracea italica x alboglabra).

The technique used for the patties is known as capeado, which means “coated” or “under a layer.” In my post for Crispy Stuffed Poblano Peppers I included detailed instructions using this technique; this batter is unique because it is made exclusively with eggs, no flour added, which makes it friendly for people trying to avoid gluten.  However, the vegetables are still drenched in flour before coating to improve adhesion so, if gluten is a concern, corn starch (the fine white powder, such as Maizena™) will be a fine substitution.

Finally, the accustomed way to serve these patties is drenched in a sauce; the most popular is red mole, but caldillo (made with tomatoes) and cooked green (made with tomatillos, see photo at the top of this post) are also very tasty.  Click on the highlighted text on the ingredient list for my recipes for those three traditional selections for this dish.

1 bunch huauzontle seed heads
4-6 slices melting cheese (such as Oaxaca style, mozzarella or Havarti)
2 eggs; whites and yolks separated (or more, depending on the size of the seed heads)
All-purpose flour, as needed (or corn starch, such as Maizena™, for gluten free option)
Salt, to taste
Oil, for frying
To serve: Sauce such as cooked green (tomatillo), caldillo (tomato), or red mole

To prepare the huauzontle, wash thoroughly, then boil in a pot with water (photo below, left).  Depending on size, they will need between 5 and 15 minutes to turn a bright shade of green; remove from water, and drain on paper towels (photo below, right): 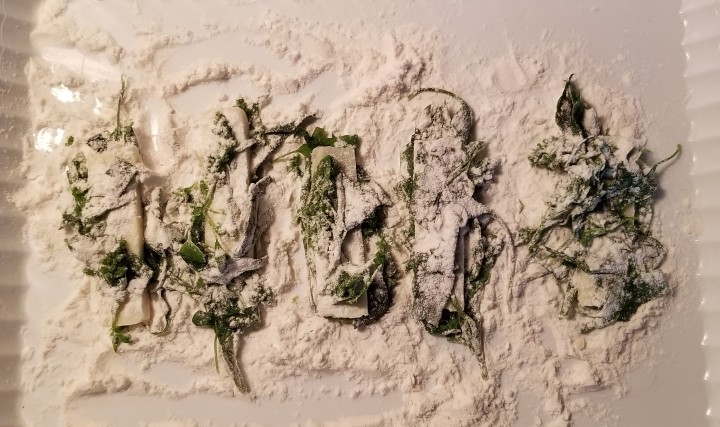 In a clean and dry bowl, beat the egg whites until foamy and white, then incorporate the yolks, slowly folding not to jeopardize the fluffy texture of the mix:

Fold until incorporated into a smooth batter.  Place tray with mounds and bowl of batter next to the stove.  In a pot, warm up sauce of choice (I used cooked tomatillo), and keep gently simmering.  In a frying pan, pour enough oil to fully cover the bottom (I always choose the smallest I have to use less oil) and warm up over medium-high heat.  Once the oil forms ripples but it is not smoking, reduce heat to medium.  Pick up one huauzontle and cheese mound from the flour using two spatulas (photo below, left) and take to the batter bowl; while holding the mound on one spatula, coat the top with batter using the other spatula (photo below, right):

Remove from pan onto a plate with paper towels, and repeat with the rest of the mounds, checking for oil temperature in between patties:

Just before serving, add patties to the pot of simmering sauce:

Allow patties to absorb sauce for just a minute or less, so they will not get too soggy.  Serve with plenty of sauce:

My husband found the taste of huauzontle a little too bitter for his liking, but I think that is what makes it special; I think this matter of personal taste is similar to what often happens with quinoa, huauzontle’s cousin from Peru.

I tried to highlight the crispiness of the capeado and unique stuffing by serving a patty as an appetizer, sliced in half, with warmed sauce on the side: 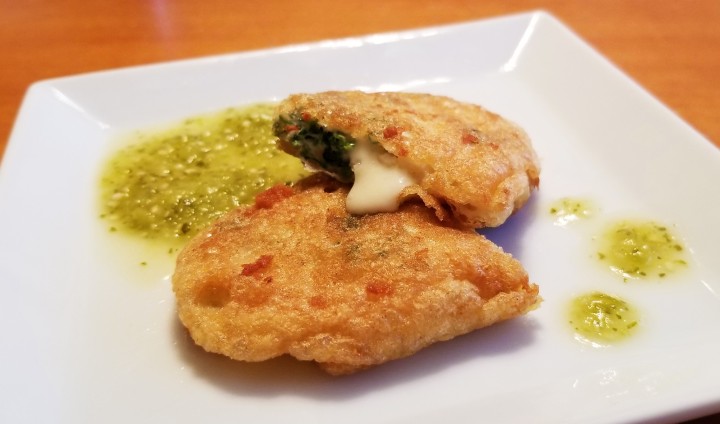 Although perhaps looking prettier than the drenched patties (look at that gooey cheese!) it proved to be an error on my part; the patty tasted greasy and a little dry.  Maybe serving with a small bowl of sauce to dip would have been a better  idea.