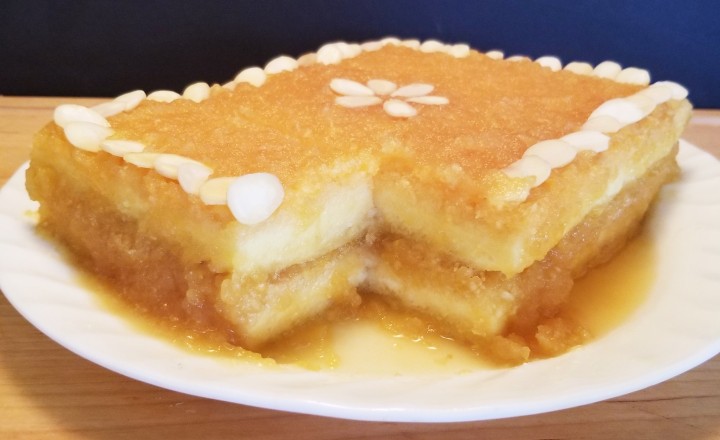 I had one marquesote cake leftover from my previous post; as I explained, marquesote has a fluffy and porous crumb which absorbs liquids readily, and its neutral taste makes it perfect to prepare more elaborate desserts.  An example, regarded as very traditional, is“Ante”, a layered marquesote soaked with syrup or other liquids (such as wine or sweetened milk), and filled and covered with different preparations, ranging from fruit- or nut-based pastes, to custard and raisins.  The original dish comes from Spain, where it was served before meals (“antes” means “before”),  then in the same way as an expatriate in Mexico, throughout colonial times (1521-1821); although sweet, sometimes antes had a savoury component, such as cooked chicken meat.  Later on, Mexican cooks and hostesses turned antes into proper desserts, strictly sweet cakes served at the end of the meal, but the name “ante” prevailed.  Popular flavours include peach, coconut, almond and custard/raisin; I had some apples so that was the flavour I chose for this recipe.  For soaking, I used cinnamon simple syrup that I had also prepared for my previous post.

Place water and sugar in a pot over high heat; once the sugar has dissolved, and the liquid in the pot starts to look syrupy, add butter (photo below, left).  Reduce heat to medium, and stir to melt the butter, then add grated apples.  Continue cooking for a few more minutes, to obtain a thick paste; transfer to a bowl to cool to room temperature (photo below, right):

Trim edges and remove a thin layer from the top of the marquesote.  Slice horizontally in half; place bottom layer on a serving plate with rim, and pour half of the cinnamon simple syrup evenly on top of the cake (photo below, left).  Spread  about one third of the apple paste on top (photo below, right):

This apple ante may be enjoyed right away, but allowing the cake to absorb the syrup and all the flavour from the apple paste for at least two hours, results in a moist and more delectable slice.  Although usually a dessert, it may be equally enjoyable while shaking-up a sedated state with a strong cup, during a coffee break:

I am bringing my recipe to Full Plate Thursday #546 with Miz Helen @ Miz Helen’s Country Cottage.

I am also sharing my recipe at What’s for Dinner? Sunday Link-Up #325 with Helen @ The Lazy Gastronome.