Last Sunday (May 27), I learned that the robin nest had only one baby; all grown up, but with a speckled chest confirming a young age, it was bravely standing by the edge, preparing to leave the safety of the straw basket, and join the wide and wild world.  Farewell, little one, and good luck!

My garden is in full motion and ready to take-off, as well.  June is a very busy month in my gardening zone 6B (What are Southern hemisphere gardeners doing in June?), with the expected parade of villains: asparagus beetles, June bugs, squash vine borers, Japanese beetles, fruit flies … luckily the heroes usually appear, as well: ladybugs, toads, fireflies, and even the occasional praying mantis.  Spiders are also helpful, and fascinating to see at work; a regular visitor in my backyard is the Black and Yellow Garden Spider (Argiope aurantia).  One of the largest orb weavers in North America, this spider builds a web up to 24″ (60 cm) in diameter with a silky zigzag line, and rapidly shakes it when threatened; the shaking blurs the spider and makes it appear bigger:

Weeding is a never-ending activity, especially in June, when the temperatures have risen to almost tropical extremes and the rain has turned leaves and grass emerald green.  Pretty violets and creeping Charlie become invasive, and if the grass goes to seed, it sprouts all over my veggie patch.  It is exciting though, with all the interesting edibles that also volunteer to freely grow.  I do not care for dandelions that much, but purslane is a delicious weed known in Spanish as verdolaga, a legitimate vegetable in Mexican kitchens.  They are sprouting all over my garden right now; in a couple of weeks I hope to be harvesting, cooking (and blogging about) this succulent plant: 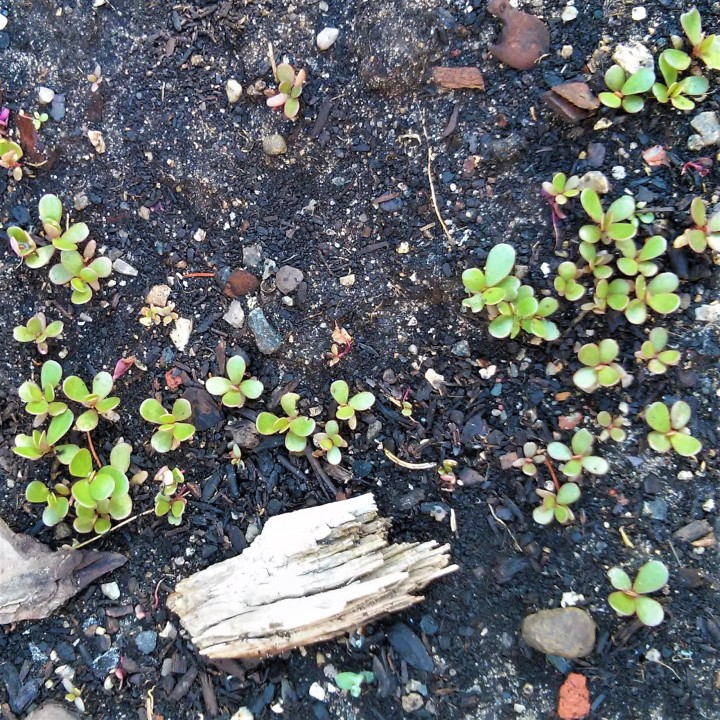 There are a lot of crops that you sow once and then will have coming back on their own in subsequent years, almost becoming weeds: mints, chamomile, claytonia, perilla, and the quintessential in Mexican cuisine: epazote (Dysphania ambrosioides).  My epazote is just sprouting near the strawberries, but I imagine that soon some leaves will be added to beans, quesadillas, and who knows, I might get inspired and even cook pancita (Mexican style beef tripe):

And June mornings are, oh so lovely! Nothing like going out in the backyard and harvest the berry of the day: strawberries, cherries, black currants, or raspberries.  Right now they are all budding or growing fruit, promising good crops, beginning very soon:

I will be away for a few days on a family trip to Iceland (I have scheduled a couple of recipes to be published during my absence).  I am very excited about it, but a little apprehensive about the garden.   I hope the heroes will come on time, since I won’t be around with my bucket of soapy water, to contain the villains.  Will the invasive weeds overwhelm the edible ones?  I have hope for the berries, a little later than usual because of the cool spring we’ve had, but sure the bugs, birds and furry beasts will feast on some.  Finally, water might be an issue; it has been raining consistently in May, but it is supposed to stop next week – unlike in Iceland, with a solid rain forecast, of course!  In retrospective, maybe booking a trip in early June was not such a good idea for my garden, but it will be interesting to see what will happen to it, fully in the hands of Mother Nature …