Today is the last day of August, and although the end of summer will not be officially here in the Northern hemisphere for another three weeks, Labour Day weekend is, at least in Canada and the US, which means the school year has either started or is upon most students, and of course, their guardians.  The comments on my previous post about cinnamon brought up an old-fashioned beverage to enjoy on hot days called horchata (pronounced or-cha-tah), also a great way to hang on to that feeling of relaxing summer nights.  The original North African beverage was prepared from a tuber called chufa (tiger nut), which arrived in Valencia and the rest of Spain in the Middle Ages, remaining popular to this day.  Horchata recipes were brought to the New World, but in the colonies, tiger nuts were replaced by different seeds and grains, according to local availability.

I love horchata, and nowadays many people in Mexico purchase it pre-bottled, either ready-to-serve or as a concentrate, so I had never thought of making a batch from scratch until I moved to Canada.  Traditional Mexican recipes for horchata call for either cantaloupe seeds or raw rice as the base ingredient instead of chufa, left to soak in hot water until they reach room temperature; the seeds/grains and water are added to a blender jar, along with a couple of pieces of cinnamon and some sugar; all this is processed for a few minutes. The resulting concoction gets strained through a cheesecloth and served with lots of ice and a sprinkle of ground cinnamon.

As I was reading those pithy recipes, I could just imagine the screeching sounds coming from the blender while the grinding takes place, and of course, it would be a death sentence for the blades if cassia cinnamon sticks were to be added since, as I mentioned in my previous post, even most coffee and spice grinders would be bound to fail trying to break the thick rolls of hard cassia.  Instead, I thought of starting with a carton of rice milk, and preparing an infusion with cinnamon, separately; that way, there is no need for a blender – or breaking one in the process, for that matter!  Straining is not required anymore, so the cheesecloth step is absent as well, and homemade horchata becomes an easy preparation, with minimum clean-up.  Now, that is my kind of refreshment for one last sip of summer fun.

Add cinnamon stick to boiling water and set aside with the rest of the ingredients – except ice – until it reaches room temperature: 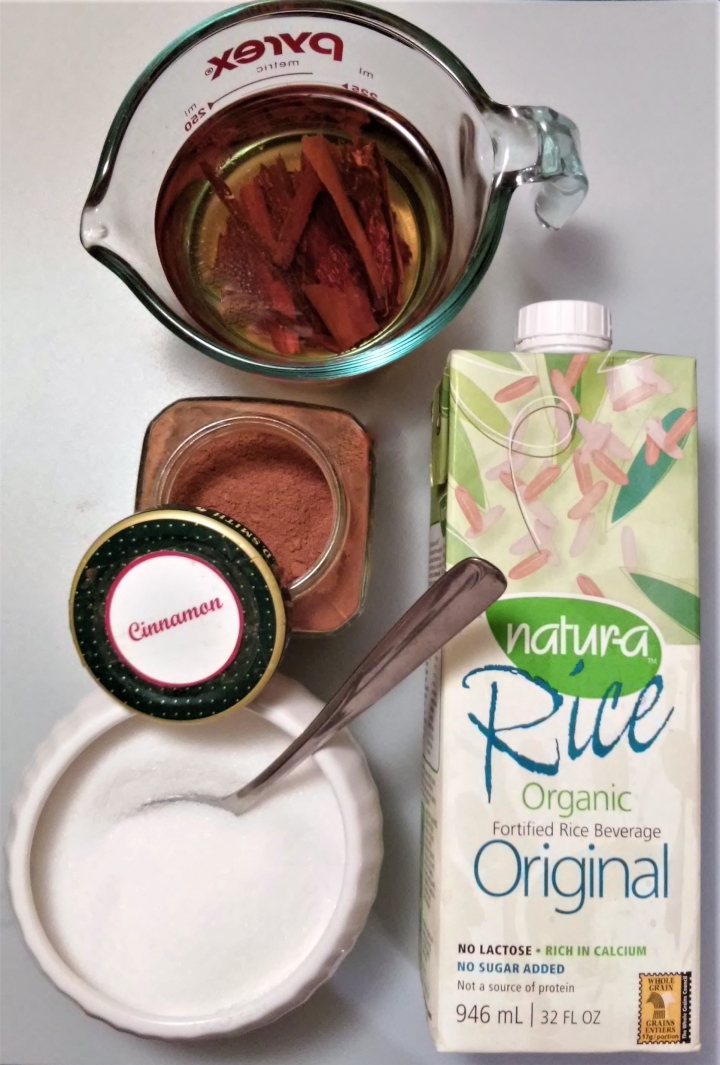 Remove and discard cinnamon stick; add sugar to the infused water, stirring until dissolved. In a pitcher, mix the sweet cinnamon infusion with the rice milk and lots of ice cubes.  Serve very cold, with a sprinkle of cinnamon.

Have a great Labour Day Weekend!

Note: Some recipes call for condensed milk, vanilla, and cow’s milk as extra ingredients to further sweeten, flavour and thicken this beverage, but I prefer the simple, old-fashioned ingredients.  Besides saving the blender and lots of work, using rice milk instead of soaking and grinding rice provides a load of vitamins and extra nutrients from the milk being fortified (and it is vegan, too).  For the calorie-conscious, one cup of rice milk contains about 130 calories, so a reduced-calorie alternative would be to use unsweetened almond milk, at 30 calories per cup.  Of course, the flavour will be slightly different, but I think still very pleasant.  In fact, in Spain, “horchata de almendra” (almond horchata) is a popular alternative to the original chufa.

I am bringing this recipe to Fiesta Friday #239 hosted by Angie @ Fiesta Friday (TGI Labour Day weekend!) and co-hosted this week by Antonia @ Zoale.com (the love for her family starts with the website’s name, and continues with adorable creations, such as a mermaid cake!) and Lathi @ From Lathi’s Kitchen (in addition to delicious recipes with an ethnic flair from her native India, she offers some great cooking tips!)

22 thoughts on “Horchata – One Last Sip of Summer”