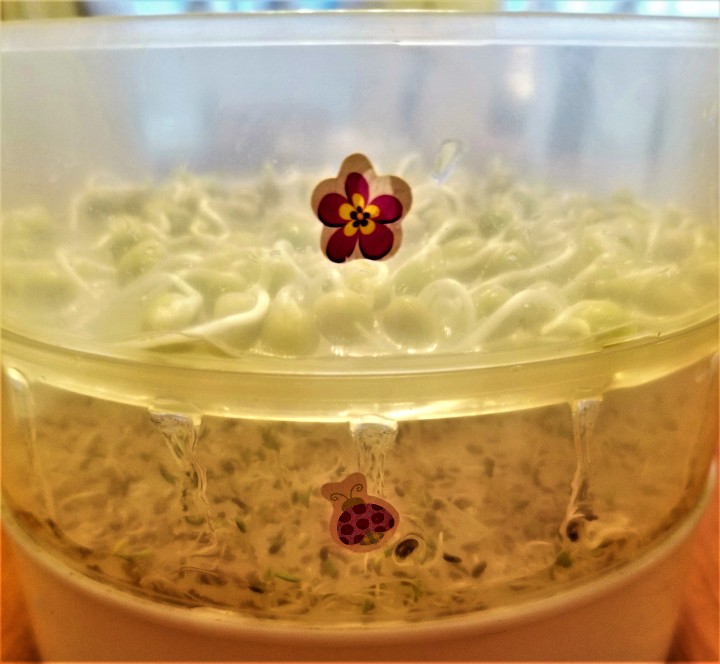 As we have entered the second half of the winter season (in the Northern hemisphere), lengthening daytimes are becoming more noticeable; vegetable gardeners are organizing their seeds, planning their plots, and experiencing a flaring need to grow (and eat!) something fresh.  Many people keep potted edibles indoors, cultivate baby greens and herbs using grow lights or, as I have been doing for the last couple of years, grow seed sprouts.  I know it is possible to cultivate sprouts in a jar, and I remember my mom sprouting soy beans indoors using a tray and a kitchen towel as substrate, but since proper humidity levels are critical to be successful and avoid mold, I would not trust myself with DIY systems, so I decided to invest in a stackable sprouter: 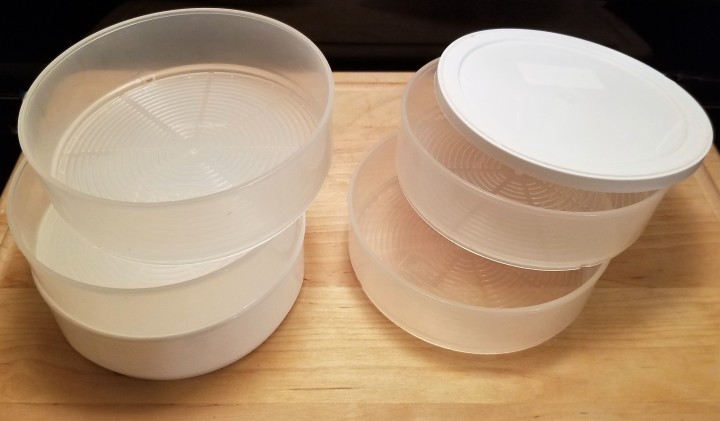 There are many options of sprouters offered in seed company catalogues, home improvement stores, and even Wal-Mart.  I am not advertising mine, but I have found it very efficient and convenient.  It is a Victorio™ 4-Tray system, in which seeds are spread in each translucent tray; the trays are stacked on top of each other and placed on the collection tray (white tray), and water is poured over the top, 2-3 times a day.  The translucent trays have a draining system, and as the water slowly siphons through the trays, the seeds are gently soaked, and germinate (see photo at the top of the post); sprouts are ready after 3-5 days.  The process can run with any number of the growing trays, from all four (for a large batch of one type of seed, or four small batches using different types of seed), to a single serving, using one tray.  The growing tray design uses water surface tension to keep the correct moisture level in each tray for all stages of the growing process.

I marked the growing trays with stickers to identify different batches (sometime different types of seeds might look identical).  For this post, though, I chose very different looking seed, to illustrate the versatility of the sprouting technique; I used green pea and alfalfa seed.  One to two tablespoons of seed are soaked in water at room temperature for 6-8 hours (photo below, left); each batch of seeds is drained in a fine-meshed colander (photo below, centre), rinsed a couple of times with water, and placed in a growing tray (photo below, right):

The trays are stalked on top of the collection tray, and two cups of water at room temperature are poured in the top tray (photo below, left).  The system must be kept away from direct sunlight.  After a few hours, most of the water has drained to the bottom; the collection tray must be emptied, the bottom growing tray moved to the top of the stack, and get watered; the lid may me placed loosely on the top tray, but not closed tight, to allow ventilation (photo below, right):

Watering is repeated every few hours, at least 3 times a day; the system will drain at different speeds, according to the stage of the sprouting seeds (different surface tension).  In the photos below, from left to right: alfalfa seeds on days 2, 4 and 5, respectively:

The sprouts are best eaten within two days after harvesting, and must be kept refrigerated, on paper towels, in a container kept partially open.  These sprouts are delicious in salads, sandwiches, soups, or as toppings for almost any dish.

There was a Romaine lettuce recall in the US and Canada not long ago; home grown alfalfa sprouts are a great and clean substitute when other greens, such as lettuce, are not available, for example, in a torta de pollo (chicken Mexican sandwich, photo below) :

And for a vegan protein boost, substitute pea sprouts for cheese or meat, such as in the Three Sisters Stew from my previous post, shown below, topped with fresh cheese at the top of the photo, and pea sprouts at the bottom: 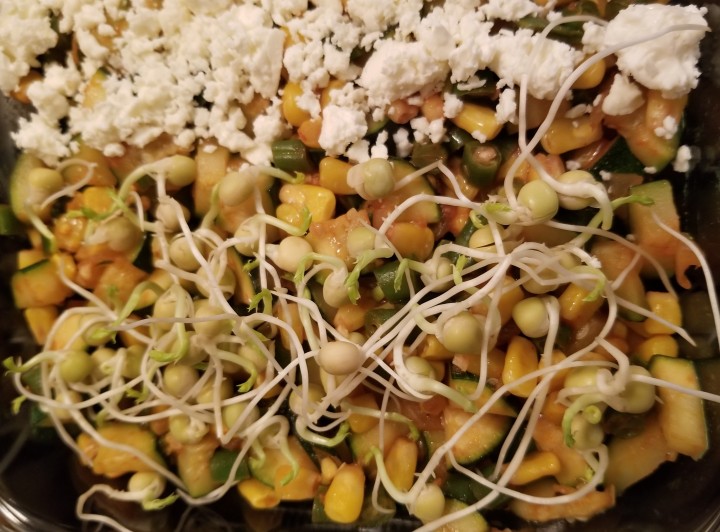 Another great reason to have a sprouter is for pre-treating hard-to-germinate seeds, such as parsnip and eggplant; after the seeds have been in the sprouter for three days, their hard coating will be softened, stimulating the seeds to sprout in a shorter time when transferred to soil.

FUN FACT:  Sometime in the 1970s and 80s, people became infatuated with sheep, dogs and other figures made of clay, covered with chia seed sprouts for “wool” or “hair”, and marketed as “Chia Pets” (see photo); the idea came from a traditional Mexican handcraft – predominantly made in the state of Oaxaca – of clay vessels, often in the shape of rams, used to grow chia sprouts as part of offerings or as ornaments. Chia (Salvia hispanica) is native to Southern Mexico and parts of Central America; the sprouts were not grown for consumption in pre-Hispanic Mexica communities, but there were two kinds of chia seed that were appreciated for nourishment and as religious offerings: chianpitzáhuac (black chia, seen in the photo, below) and chianpatláhuac (white chia).  There are different uses of chia seed in Mexican recipes, especially for beverages, since the seed coat expands to form a gel when wet, thickening the liquid, or flowing as little jelly pockets in it, similar to bubble tea.   In recent years, both chia seed and sprouts have been recognized for their many nutritional qualities (antioxidant, gluten free, anti-inflammatory, and containing  protein, fiber and omega-3 fatty acids); and, because of its gelling properties, chia seed mixed with water is used as an egg replacer in vegan cuisine.

I am joining Cooking and Crafting with J&J #179, co-hosted by Julie @ Julie’s Creative Lifestyle and Jessica @ Plucky’s Second Thought

9 thoughts on “The Sprouter – A Winter Blues Fixer”