St. Valentine’s Day has been celebrated in Europe since the Middle Ages, as a tribute to recognize the martyrdom and execution of St. Valentine, which occurred sometime between 260 and 280 AD, on February 14. There is not much information about Valentine’s life, but he is known for the fact that he was arrested, imprisoned and tortured for performing Christian marriage ceremonies against the command of Roman Emperor Claudius II.  Many legends characterizing Saint Valentine in relation to adulation and romantic love were invented in the 14th century in England.  It was believed that birds paired in mid-February, which was then associated to Valentine, as promoter of love and marriage; handmade paper cards became popular around this time. Poets and writers, such as Geoffrey Chaucer (1343-1400 AD), and later William Shakespeare (1564-1616 AD), romanticized the day in their work.  St. Valentine somehow became the Patron Saint of bee keepers, engaged couples, epilepsy, fainting, greetings, happy marriages, love, lovers, plague, travellers, and young people.  He is represented in pictures with birds and roses and his feast day is still celebrated on February 14.

The industrial revolution generated innovative markets, such as the mass production of greetings cards by the 19th century, around the time St. Valentine’s Day made its way to the New World.  In the 20th century, as early as 1913, Hallmark™ began marketing St. Valentine’s Day as a holiday dedicated to love, and promoted the associated gift and card exchanges.  In Mexico, el Día de San Valentín became popular later on, also known as El día del amor y la Amistad  (“Love and Friendship Day”) and – although a big day for couples – cards, chocolate boxes, flowers and other gifts might be exchanged not only amongst people romantically involved, but to express affection or appreciation for friends and relatives, as well.

I remember cookies as another sweet treat for St. Valentine’s; my mom and I would often bake heart shaped cookies, which I sometimes shared with my friends, and I loved receiving small sweet tokens from them, too.  Grageitas (meaning “tiny tablets” or “little sprinkles”), are a classic Mexican confection of bite-size cookies topped with rainbow-coloured sprinkles.  The recipe I am sharing in this post is based on traditional cornstarch cookies from Surinam, but they are very similar to Mexican grageitas, and I like the added feature of being gluten-free.

1/2 cup butter
1/2 cup granulated sugar
1 tsp vanilla extract
1 egg
1 3/4 cups cornstarch, plus more for dipping fork (white and very fine powder, known as corn flour in Great Britain; Maizena™ is a popular brand in Mexico and many other countries; see this post if not sure)
Rainbow coloured sprinkles

Preheat the oven to 350°F (175°C).  Line a baking sheet with parchment paper and set aside. Mix butter and sugar in a bowl until very creamy. Add vanilla and egg, and continue mixing until well combined. Add the cornstarch gradually, mixing until a dough is formed and may be shaped into a ball; it should be a little sticky, but easy to handle.  Shape small portions into balls of about ½ inch (1.25 cm) in diameter; place on the prepared sheet, then flatten with a fork dipped in cornstarch.  Top cookies with sprinkles, gently pressing them into the dough.  Bake for 10-12 minutes, being careful not to brown them too much; the cookies should have a light texture, and be white on top and golden brown on the bottom.  Let rest on a rack until cool, then transfer to a plate, as seen below, or store in an air-tight container for up to one week: 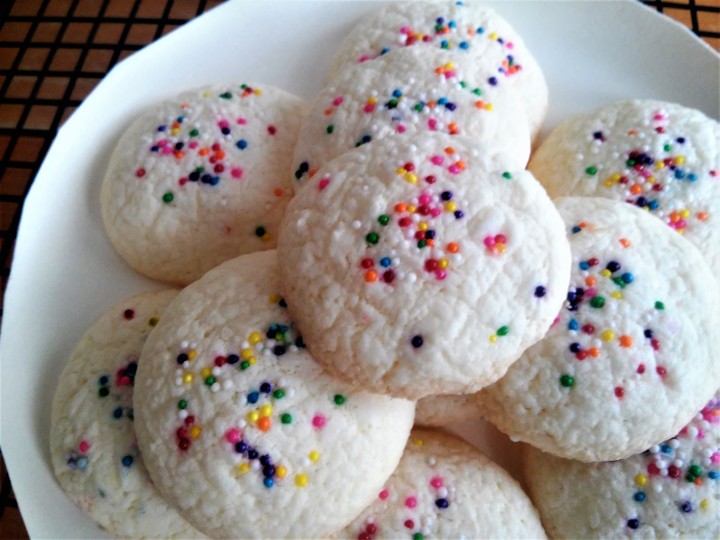 These cookies truly took me back to Mexico, and made me think of those sweet San Valentín gifts, lovingly shared with friends and family.

Have a Happy St. Valentine’s Day!

NOTE: Grageas or galletas con grageas (cookies with sprinkles) are a different Mexican treat, also covered with rainbow sprinkles, but larger, less puffy and crumblier than grageitas.  They are usually sold at Mexican bakeries as a variety of sweet bread.

And I am sharing my recipe with Julie @ Creative Lifestyle and Jessica @ Plucky’s Second Thought, co-hostesses of Cooking and Crafting with J&J #180

I am bringing my cookies to Fiesta Friday #314 with Angie @ Fiesta Friday, co-hosting this week with Liz @ Spades, Spatulas & Spoons.