On February 24, 1821, in the town of Iguala (currently in the Mexican state of Guerrero), Mexican military leader Agustín de Iturbide presented a plan declaring Mexico as an independent country, to end a cruel war that had lasted almost a decade.  Iturbide also imagined a flag, created under his watchful supervision; the design included diagonal bands in different colours, representing three principles, which were demanded as basic guarantees in his plan: Green – Independence, White – Religion, and Red – Unity.  This flag was adopted that same day by the Mexican Army (named Ejército Trigarante – Army of the Three Guarantees), and is considered the precursor of Mexico’s flag.  Iturbide’s “Plan de Iguala” (“Iguala Plan”), was also the basis for the formal Treaty of Córdoba, in Veracruz, an agreement that recognized Mexico’s sovereignty and arranged for the withdrawal of the Spanish army, signed a few months later by Iturbide himself, and Juan de O’Donojú, the last Viceroy of the New Spain (Mexico.)

When the Army of the Three Guarantees arrived in Mexico City, the takeover of the capital was done in a matter of hours; the ecstatic atmosphere of victory was ideal for Iturbide to proclaim Mexico’s independence, while carrying the Three Guarantees Flag.  Later on, during his short government, he kept the original three colours for the Mexican flag, but modified the design into vertical bands, and added a coat of arms on the central white band.  Throughout the history of Mexico, the bands acquired a different meaning, as the government became secular: Green – Hope in the future, White – Purity of ideals, and Red – Blood of the heroes; the coat of arms has also been modified, with the current design dating from 1916, adopted near the end of the Mexican Revolutionary war.

February 24 was established as “El día de la bandera Mexicana” (Mexican Flag’s Day) in 1934, officially recognized as a national holiday in 1940, and reiterated by new laws regarding Mexico’s national coat of arms, flag and anthem, promulgated in 1968 and 1984.

To commemorate this holiday, I am sharing my recipe for picaditas, a classic corn dough antojito (“little craving”) from the state of Guerrero, the cradle of Independent Mexico and the Mexican flag; incidentally, picaditas are also a traditional dish in the state of Veracruz, where the Treaty of Córdoba was signed.  The base of this appetizer is made by pinching around the edge and centre of thick corn dough circles while still hot, to produce a rim and bumps that hold the toppings in place (see photo at the top of the post).  It is fair to guess that this technique gave origin to the name, from the Spanish word picar; this is a verb with many acceptations, but in this context translates as “to pinch”‘.  Picada is the feminine adjective derived from the verb, meaning “something that has been pinched”, and finally, picadita is the diminutive of this adjective. Some variations may include toppings such as steak, chorizo, seafood and even maguey worms, but I found that the classic recipes only call for cream, salsa, fresh cheese and onions, with refried beans as the only option for an additional topping.

In a bowl, mix corn flour and water (photo below, left); knead lightly until a soft ball of dough is formed (photo below, right):

Work with one portion at a time, keeping the rest covered to prevent them from drying.  Roll the portion into a ball, place between two pieces of thick plastic (I use a resealable bag, cut open) and flatten into a 3-inch circle* (photo below, left); lift the top plastic sheet (photo below, right):

*Note: Place on a flat surface and flatten with a cutting board or the palm of your hand; if using a tortilla press, do not press all the way down, or the circle will be too thin.

Lift the bottom plastic with one hand, and flip onto the other, then carefully remove the plastic and softly deposit the circle on a hot grill or skillet, over medium heat (photo below, left); repeat with each portion of dough, cooking them in batches, and flipping them after a couple of minutes, to cook on both sides (photo blow, right):

Remove the cooked circles, and while still hot, pinch the dough around the edge to form a rim (I always use a kitchen towel to avoid burning my fingers with the steam and hot dough, photo below, left); pinch the centre a few times for extra surface area to hold toppings better (photo below, right):

Over low heat, place a batch of prepared dough circles back on the skillet, pinched side up, and brush the tops with lard or oil (I used vegetable oil, photo below, left); the low heat and keeping the fat off the skillet surface, allow the circles to acquire the aroma of fried dough without getting hard as rocks.  After one minute, drizzle cream over and then spread some refried beans on top, optional (for the photo below, right, I left one with just cream, and added beans on the other):

Top with sauce, onions and cheese; let cook for another couple of minutes, then serve immediately:

The plate above has a green picadita with no beans, and a red one with beans.  The crispy texture, bursts of flavour and the scents of fried dough and hot salsa, are just divine. In addition, the arrangement of green, white and red on the plate, and the origin of this recipe, come together as a fit homage to the Mexican flag today, February 24, on el día de la bandera mexicana. 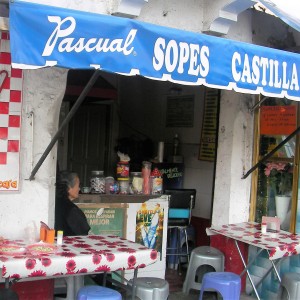 In Mexico City, these treats are called sopecitos, or if prepared bigger, sopes.  I remember a small establishment in my childhood neighbourhood called “Sopes Castilla”.  The business was just a tiny kitchen with foldable tables and plastic stools on the sidewalk, and all they offered was soft drinks and their sopes – big and thick, and with simple toppings of salsa (green or red), onions and a sprinkle of cheese – but, as my picaditas, the balance of textures, flavours and scents was irresistible.  They were so good, that even after many years, my sister and brother in-law were still visiting whenever they were in the neighbourhood (the photo is theirs, from 2012).

I am joining What’s for Dinner? Sunday Link-up #189 with Helen @ The Lazy Gastronome.

I am sharing my recipe at Miz Helen @ Miz Helen’s Country Cottage as my contribution to her Full Plate Thursday # 421.