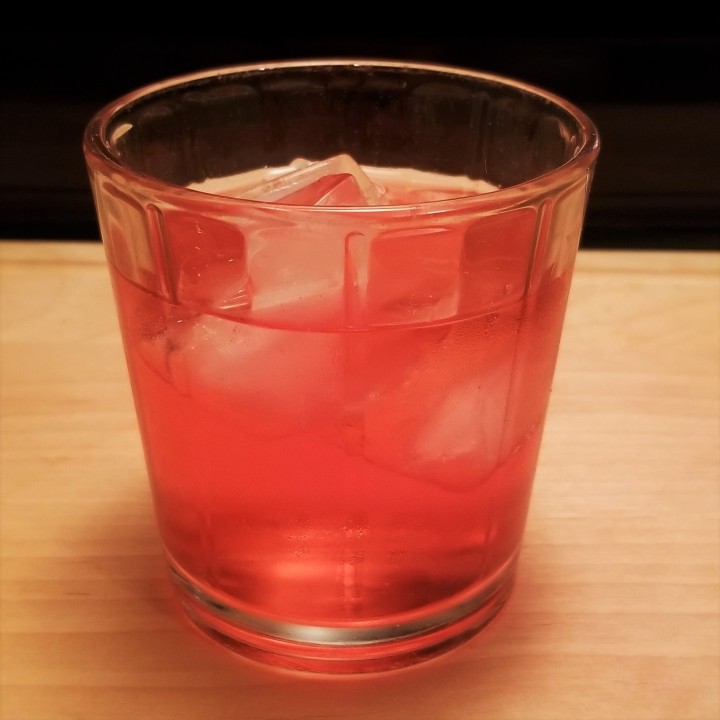 It was mostly rainy and cool last week; my husband and I even had a bowl of homemade ramen to sustain us yesterday, instead of the traditional Father’s Day barbecue. This morning, there is still a cool mist in the air, and the forecast calls for cloudy skies, but temperatures reaching the mid twenties (in Celsius, or mid seventies in Fahrenheit); as far as I am concerned, that is warm enough to prepare a cold beverage!  I had a few leaves of aka shiso (red perilla) and a bunch of chamomile flowers from a recent harvest in my backyard: 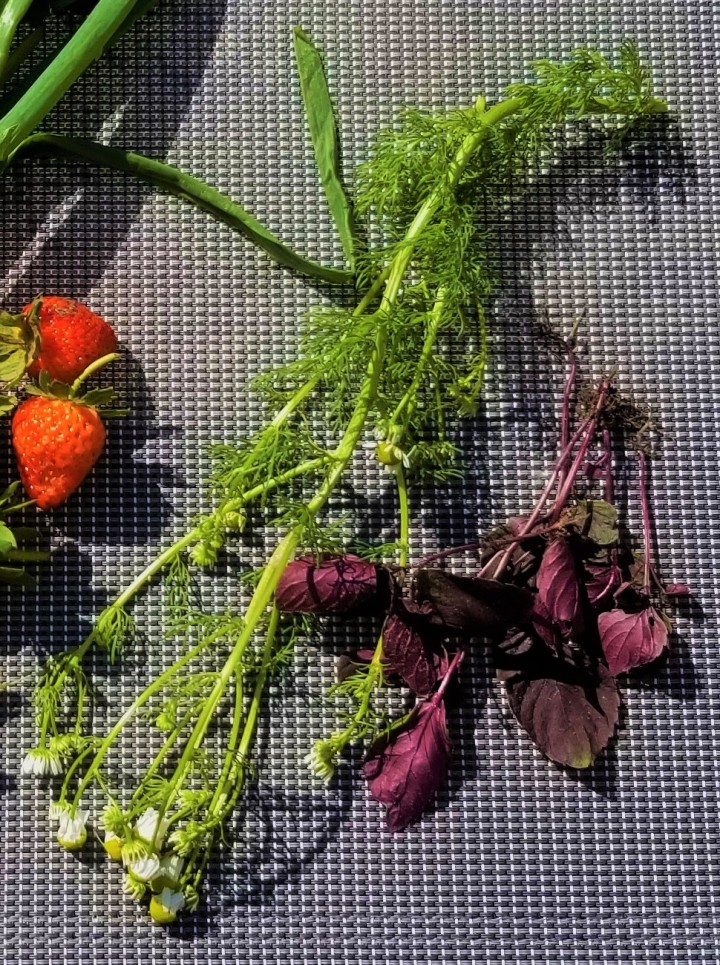 Also, there were several limes in the fridge so, when life gives you limes and herbs, make ice tea limeade!  Aka shiso ice tea is a Japanese beverage, usually prepared with lemon juice, but I used lime juice and agave syrup to give it a Mexican feeling (and use what I had at hand), and chamomile to take full advantage of my harvest; all that turned out to complement the flavours very well.

The pink part in the recipe is a bonus, thanks to flavin, a pigment present in red perilla, as well as in other plant materials such as red cabbage and cornflowers.  Flavin is an anthocyanin and, in a nut shell, this type of pigment molecules will react with hydrogen ions (H+) from other substances when water is present, changing the colour of the solution depending on the pH.  An infusion in plain water, which has a neutral pH, will be purple or blueish; basic solutions with high pH levels, for example by adding baking soda, will turn the solution green or yellow, while acidic substances, such as citric acid in lime or lemon juice, donate hydrogen ions, resulting in a low pH, and turning the solution pink or red.

I let my washed herbs steep separately in equal amounts of freshly boiled water. The chamomile infusion was mostly clear, with just a hint of yellow (photo below, left); the perilla produced a murky purple infusion, from the neutral pH of water (photo below, right):

I let the infusions cool down a little, then strained and mixed them together, and added the agave syrup; the colour of my drink was now a lighter purple, but still murky (photo below, left). Adding the lime juice produced a drastic change in colour, first to light pink (photo below, centre), and as I added more juice (further lowering the pH), to a very bright pink (photo below, right):

What a beautiful effect, almost a magic trick! And the flavour also went from dull with a hint of cough-medicine-concoction, to a nice and refreshing beverage; I transferred some to a glass and added several ice cubes to obtain my pink ice tea limeade:

Technically not a tea, but a tisane, but “ice tisane” just does not sound right.  This is a great alternative to artificially coloured pink lemonade.  I prepared the herb infusions separately to monitor colour, but it actually may be done in a breeze with all the herbs in one pot of freshly boiled water.

Aka shiso is very popular in Japan, not only for infusions, but to season and colour preserved plums (umeboshi) or crumble dry leaves on rice and other dishes. There are other varieties of perilla; Ao shiso (green perilla) is used mostly raw, to eat with sashimi (raw fish), wrap rice or other food, and frequently, as a garnish on sushi platters (that is why many sushi trays have those plastic green decorations instead). There is also Korean perilla, sometimes called sesame leaf (but not a true sesame plant; it is called that because it produces oil with a similar taste to sesame oil).

As for growing at home, it is sometimes hard to sprout perilla seed. I tried sprouting it indoors in a small pot, with limited success, but once in the garden, it grew well and bloomed; I sprinkled lots of the dry flowers directly in the pot and in the garden bed in the fall, and the following year, many sprouted and were spreading like weeds (photo below). If it is not possible to grow it, packed dry red perilla leaves are available to purchase on line.

I am sharing my recipe at Mix it-up Monday #164, hosted by Lisa @ Flour Me with Love

This cool beverage is perfect for Fiesta Friday #281 hosted by Angie @ Fiesta Friday. And thank so much to Angie and Ai @ Ai Made it for You for featuring my Veggie Omelette with a Mexican Touch.