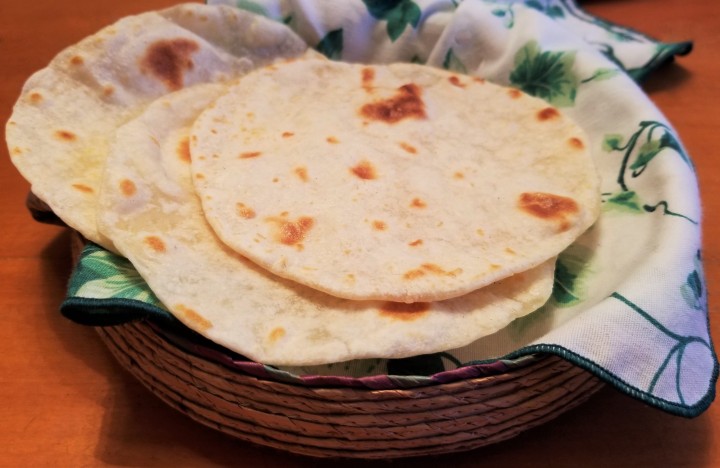 History Tidbit: I always assumed that the exchange of goods and crops between Spain and its colonies in the Americas was an organized operation, or at least planed to some extent. I just learned from reading the website of Mexico’s CANIMOLT (Cámara Nacional de la Industria Molinera de trigo – National Chamber of Wheat-Milling Industry) that specimens sent to the New World were often consumed aboard the ships before reaching their destination, since the journey was long and delays due to bad weather and other circumstances were common. For wheat in particular, the website tells the story of one of Hernan Cortez’s servants, a black Portuguese man named Juan Garrido, who found three grains of wheat mixed with rice in a sac, and decided to sow them.  According to the story, only one grain sprouted and prospered, generating 180 grains, and from those, wheat became a new crop and was well established in Texcoco (just outside Mexico City) and in Puebla (a central state) by 1534, some thirteen years after the establishment of the colonies (New Spain).

The history of the wheat tortilla is also interesting, because neither did it originate in Texcoco or Puebla, nor was it an adaptation of the corn tortilla, a pre-Hispanic staple from central Mexico.  In the territories corresponding to modern-day Sonora (a Mexican Northern state) and Arizona (a Southern US state), where Jesuit missions were established, the missionaries taught the natives how to cultivate wheat but, while proper mills and bakeries had been established in Mexico City, producing flour and using Spanish recipes for bread and sweet confections to suit the conquerors’ taste, the people in the Northern regions had to make do with what they had available. Flat bread made from wheat coarsely ground by hand was the result, and from there, the more refined, thinner wheat tortilla was developed. Some sources report that this flat bread might have been invented by Sephardic Jews who came to the Americas from Spain and Portugal, and were living in the Northern regions to avoid persecution; although most had converted to Catholicism (often by force), they were still discriminated.  It is believed that they probably modelled the flat bread as some variation of the Middle Eastern pita, or even with inspiration from their Jewish soft matzo.  According to Wikipedia, soft matzo is usually only homemade but “if it were commercially available, would essentially be a kosher [wheat] flour tortilla.” To reinforce this theory, the flat bread made in the Mexican state of Sonora with coarsely ground wheat was called “zaruki”, which is also a Jewish last name (sometimes spelled “Zarucki.”)

The Northern Mexican states including Baja California, Sonora, Chihuahua, Coahuila, Nuevo Leon, and Tamaulipas, all favour wheat tortillas over corn, and each region has its own recipes, some closer to the original (wheat flour and water), while others call for extra ingredients, added much later – as recently as the 19th Century – such as fat (mainly lard or butter), milk, or baking powder.  My recipe is based on my mom’s, who was born in Agujita, Coahuila. Recipes from that state usually call for less fat than their counterparts from other states, and many include a little baking powder.  My mom always used vegetable oil for the fat, which I like, and this also keeps the recipe vegetarian friendly.

In a large bowl, mix all the dry ingredients.  Pour oil over them, slowly and with a spiral motion, beginning at the edge of the bowl (photo below, left); incorporate ingredients with a spatula (photo below, right):

Continue mixing until oil is not visible, and the mix appears sandy.  Add warm water gradually, and continue mixing (photo below, left), until a ball may be formed (might not need all the water).  Transfer to a flat surface and knead lightly for a couple of minutes; then form into a ball (photo below, right):

Transfer back to the bowl, and let rest, covered, for ten minutes; divide into six portions, and form each portion into a thick disc (photo below, left); keep covered until needed.  Place a large pan or skillet over medium heat until hot, then reduce heat to low.  Meanwhile, start flattening each disc with a rolling pin over a lightly floured surface (photo below, right):

Continue extending, to a thin circle of approximately six inches in diameter (photo below left); place circle on hot skillet, and allow to cook until blisters have formed all around the tortilla (photo below right):

Flip tortilla; it should be dry and have a few light golden brown spots; allow to cook on the other side, until it forms blisters again (photo below, left), then transfer to a clean kitchen towel, and keep warm (photo below, right):

Repeat with the rest of the discs (photo at the top of the post).  Serve as soon as possible, for example with machaca with eggs and refried beans (click highlighted text for my recipes): 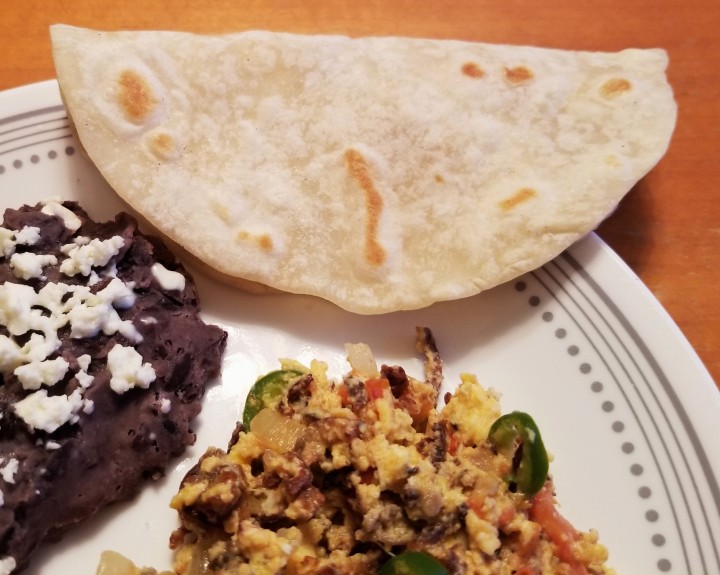 Making these tortillas always takes me back to my childhood, when I used to “help” my mom, rolling tortillas in every shape (except round, probably); always so patient, she would just giggle and gently show me how to correct the shape to a decent disc, and with practice, I eventually started making them by myself.  So, although it might seem like a lot of gumption is needed to make these homemade wheat flour tortillas, all it takes is a little practice, and once you have tried them, it might be hard to go back to the ones out of a package!

Two of the nicest features of wheat flour tortillas are that they travel well carrying fillings and salsa without getting soggy, and that they remain pliable and pleasant to eat even cold.  These characteristics make them a lunch box favourite, for example rolled with layers of different preparations in burrito form. The tortillas in this recipe are too small for the bundle style burritos prepared in Sonora and the US Southern states, but they are great for Chihuahua style burritos de guisado, and Mexico City style burritas, which will be the topics of my next posts.

I am bringing my recipe to Thursday Favourite Things #402; I was thrilled to see my Deshebrada – Shredded Beef with Pepper Strips featured at this party both by Marilyn @ Marilyn’s Treats and by Bev @ Eclectic Red Barn! They co-host every week with Katherine @ Katherine’s Corner, Nina @ Vintage Mama’s Cottage, Amber @ Follow the Yellow Brick Home, Theresa @ Shoestring Elegance, Pam @ An Artful Mom and Linda @ Crafts a la Mode.

I am joining What’s for Dinner? Sunday Link-Up #214 graciously hosted by Helen @ The Lazy Gastronome.