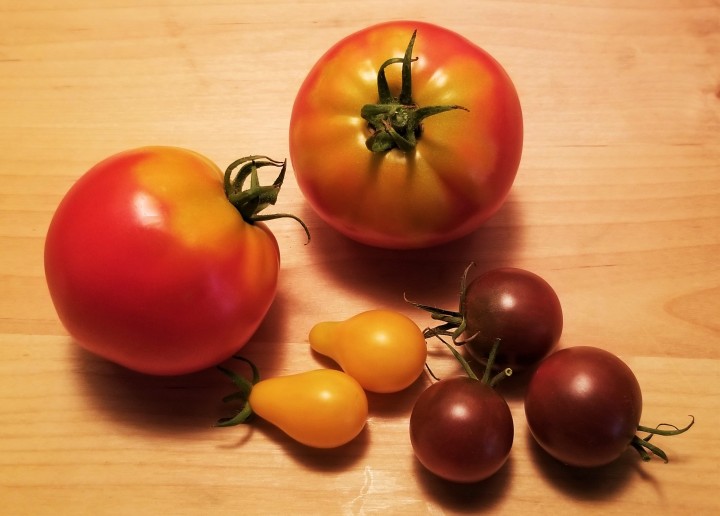 Some of my backyard tomatoes this year seem to have a chip on their shoulder, or rather, a condition called “yellow shoulder.”  As seen in the picture above, my small black cherry and yellow pear tomatoes look fine, but the red slicers show a shade of yellow over the area near the stem that just will not turn red, not even orange.  I just learned that this is a physiological response that will outlast the ripening process, resulting from factors that limit potassium absorption during the mid-growth stage of the fruit, and can be caused by either mosaic virus or environmental conditions. The foliage on my plants looks generally healthy, not mottled at all, so I ruled out the virus. In the hierarchy of environmental conditions causing yellow shoulder I found: extreme temperatures, either below 60°F (15.5°C) or above 90°F (32°C), or going up and down; sustained high humidity levels; and poor light. Except for the last, I think those conditions describe pretty accurately the prevalent weather this summer, with extreme heat waves followed by cool spells, and lots and lots of rain in short periods, especially in June and July.  Under those conditions, it is understandable why my poor tomatoes refuse to turn red.

I am guessing the cherry tomatoes are small enough that their shorter growing stages make them less susceptible to these conditions, and that for the yellow pear ones it is not an issue since they are not supposed to turn red at all.  I like my mini tomatoes as a side, for example in this brunch platter of plant-based bacon (my vegetarian daughter is home) and scrambled eggs with cheese and garden chives: 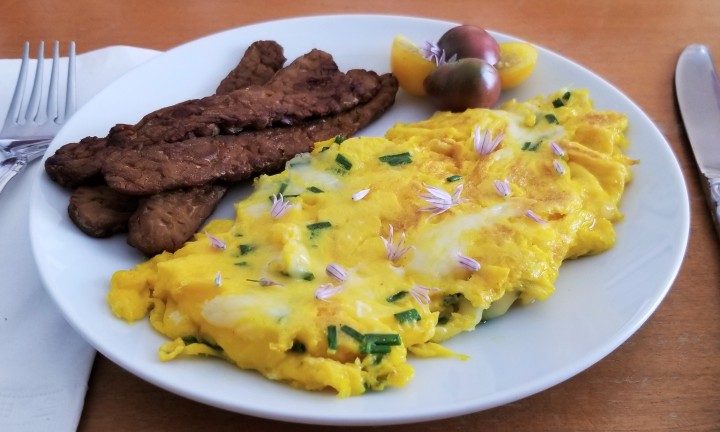 As for the red slicers with a yellow shoulder, the good news is that there is no need to fret, since they are still edible; the yellow areas are not flavourful and have a spongy, hard texture, though, so a serene measure is to simply cut off that part and use the properly ripened bottoms in sauces or salads.  I will be using some of mine, chopped in a salsa as part of the recipe in my next post.

Science Tidbit: Many tomato varieties used to naturally ripen unevenly, and the discolored stem area was a characteristic, not a defect, until, according to Wikipedia, sometime in the mid 20th Century, the discovery of a mutant “u” phenotype that caused “u”-niform ripening was extensively applied by companies which advocated for the now dominant “perfectly” red tomatoes, which unfortunately had the side effect of “… poor taste and lack of sugar in modern garden and commercial tomato varieties, … from breeding tomatoes to ripen uniformly red.”   With human manipulation of cultivars, a wide variety of tomatoes have been developed not only for appearance (full redness), but for longer shelf life, higher yield, resistance to diseases, etc., which have caused unintended loses in flavour, as in the case of uniformly red tomatoes, or even nutritional value for other traits.

Another Science Tidbit (from a study in the Israel Journal of Plant Sciences): Fortunately, some cosmetic mutations have led to varieties sought for their nutritional benefits.  The first High Pigment (HP-1) tomato was originally discovered as a spontaneous mutant in 1917 at the Campbell Soup Company farms, with other HP mutations reported in the 1970s.  They get their extra punch of red colour from higher lycopene content, which is a well known carotenoid hydrocarbon generally thought as beneficial for humans, so some varieties engineered with these and other similar mutations are now being marketed as healthy high-lycopene tomatoes.  In spite of all the buzz, more studies are needed to prove lycopene’s benefit to human health (wow!!); in this study, though, the authors mentioned that plants carrying HP-1 mutations are also characterized by higher levels of flavonoids (such as quercetin) and vitamins (such as ascorbic acid), and their own studies of HP-2 mutants resulted in higher levels of those nutrients, plus also β-carotene, lutein, α-tocopherol and rutin, all proven essential nutrients.  So those expensive bright-red, high-lycopene tomatoes do provide a healthy boost in our diets, just not necessarily from the lycopene, until definite proof is found.

20 thoughts on “Tomatoes with a Grudge?”