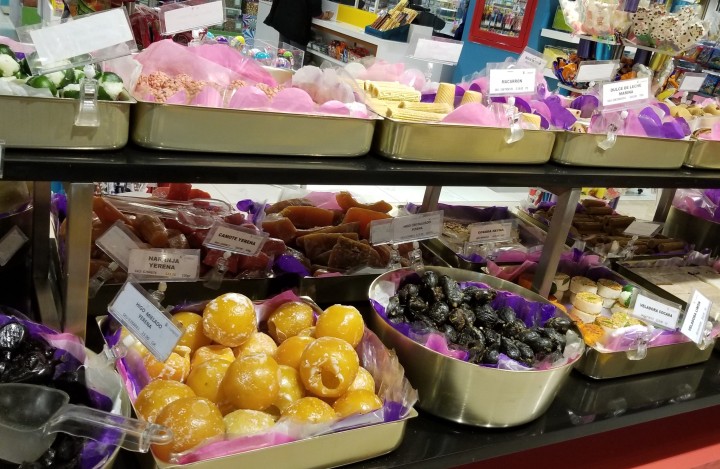 To wrap-up Mexico’s “patriotic month” of September, I am sharing some pictures of traditional Mexican sweets, known as “dulces típicos”, literally translated as “typical sweets”, in the sense of being characteristic of Mexico.  Back in the day, when I was a kid, this type of treats could only be found sold on the street, or at old-fashioned markets and specialty stores.  Many are crystallized fruit, such as the limes filled with sweetened coconut shavings, and whole oranges and figs seen in the photo above.  Others are made from milk, for example the macarrones in the photo above (top shelf, centre), or cajeta, the well-known sweet goat’s milk reduction:

Different seeds are used as well; peanut or pumpkin seed brittle (palanquetas), and popped amaranth bars are amongst the most popular.  Then, in the 1980s, there was a revival of everything Mexican.  Initially, department stores offered these sweets in baskets with colourful linings, and later, conveniently packed in different presentations:

Now, they are everywhere! My sister sent me a photo of a candy kiosk at a recently inaugurated mall in the city of Culiacán:

And on a trip this past spring, I even found a store at the International airport in Mexico City entirely devoted to traditional Mexican sweets:

I wished I had brought those freshly made sweets back to Canada, but I am afraid the customs officer would have taken umbrage at that!  I bought some packaged ones, though; a variety of cajeta treats like the ones shown in this post, as well as amaranth bars and wafer sandwiches trimmed with amaranth:

Although most of these sweets were created after the Spanish conquest, with ingredients brought from the Old World, such as sugar cane, citrus fruit and milk, the combination with native ingredients (such as amaranth) and evolving cooking techniques, produced unique flavours and textures that elicit special memories and a pleasant state of languor when consumed.    I will come back to talk about some of these delightful dulces típicos mexicanos in more detail as I develop my recipes to recreate them at home in Canada.