Epazote (Dysphania ambrosioides) is a traditional Mexican herb that I have used and described in my posts before.  In English, it is known as Mexican tea or wormseed, and grows freely (sometimes considered invasive) in Southern USA, Mexico, Central America, and parts of South America.  I bought a seed packet a few years ago, spread some in a sunny patch, and I have had them self-seed and come back every late spring ever since.  There are many Mexican dishes that call for epazote, but the best known is frijoles de la olla – Beans from the Pot.  Epazote is used for its pungent flavour and in particular in this dish, also for its ability to prevent flatulence and bloating.  Epazote‘s scent and flavour are one of a kind, and there is a conglomerate of adjectives trying to describe them; it has been compared to the liquorice-like taste of fennel or anise, declared strong as tarragon, or labelled as citrusy, petroleum-like, savoury, minty or putty (?? no idea what that last means, LOL).

Summer savoury (Satureja hortensis) is epazote’s Old-World counterpart, native to the Mediterranean region and now naturalized in Southwest Africa, Asia and North America, particularly Eastern Canada*.  I started growing it in my garden a couple of years ago, most successfully in pots outside, but I have not been able to make it self-seed yet.  Summer savoury has been used as a food flavouring for over 2,000 years, and as epazote, it has been attributed properties that prevent the digestive system to crepitate.  Summer savoury is called ajedrea común in Spanish, and sarriette, in French; it is so frequently used to season pea and bean dishes that its German name is Bohnenkraut which translates to “bean herb.”  Its flavour and scent are sometimes compared to marjoram and thyme, or as a substitute, “heavier than mint and lighter than sage” (“Rodale’s 21st Century Herbal”; Balick, M.J.; Rodale nc., 2014, p. 265).

Since the rain and intermittent heat have produced an abundance of herbs in my garden this season, I had lots of self-seeded epazote growing in the garden bed, and my sowing of summer savoury in a pot was looking very healthy as well, as shown at the top of this post.  As it may be appreciated in the photo, the plants look very different.  Epazote (on the left) has serrated leaves in a bright shade of green, and can grow as tall as four feet (1.2 m); summer savoury, on the other hand, is a short plant that has fine stems with dark leaves (in the pot on the right).

I decided to harvest a bunch of each and cook two pots of beans, side by side, following my Frijoles de la Olla – Beans from the Pot recipe, to compare their similarities or differences in flavour and aroma.  Once in the kitchen, I washed and dried the stems; in the photo below, samples of epazote on the left, and summer savoury, on the right:

Ingredients (for each batch)

Wash an drain beans; remove any brush, pebbles or damaged beans; set aside.  Bring water to boil in a large pot, then add beans, onion, fat and salt.  Bring back to boil, then reduce heat to medium and cook beans, covered, until tender (about 1 1/2 hrs.), checking occasionally to make sure the beans are completely covered with water; if needed, add more boiling water.  Once beans are fully cooked, remove lid, add epazote (photo below, left hand pot) , or for this test, summer savoury (pot on the right), adjusting seasoning with more salt, to taste:

Let simmer for another 10 minutes.  Makes about 2 cups of cooked beans per batch, plus broth.

I gave my family a blind test of small portions from each pot; my husband did not particularly care for either (sad), and I guess for me it was obvious which one had which herb, since I know how they are supposed to taste and smell.  For my daughter, though, it was a new experience; she usually does not like soups or dishes with broth, but she liked them both equally well.  For the epazote, she said it was “citrusy and light” and for the summer savoury “earthy and stronger”.  She could not pick a winner, in fact, she helped herself to a full-size portion, mixing beans and broth from both batches: 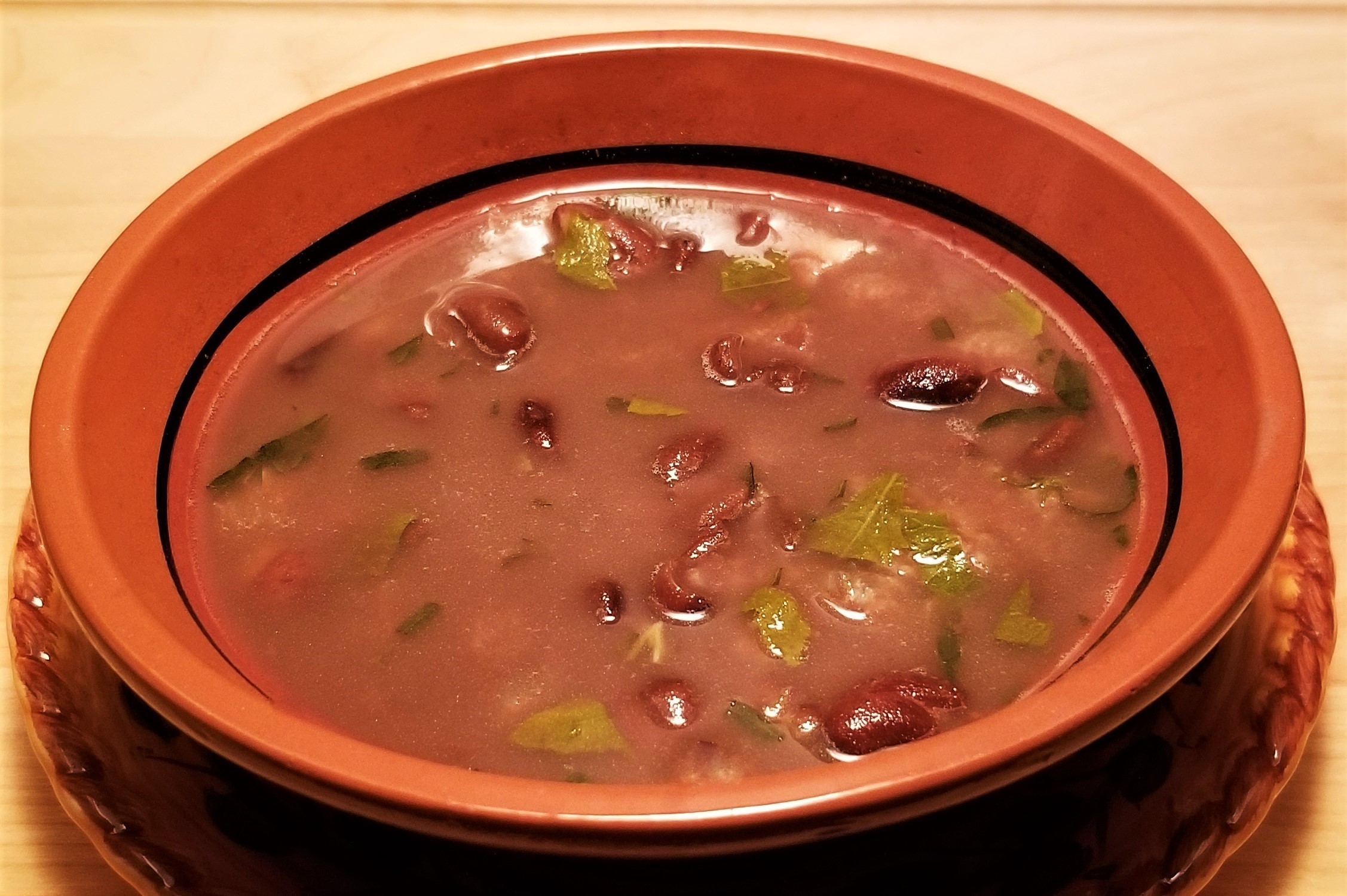 I tried it, too, and I thought it was great!  Like my daughter, I would not say these herbs are interchangeable; each one has its own, unique charm and flavour profile.  I will definitely continue to grow both in my backyard, using them in Mexican,  or Mediterranean dishes, accordingly, but now that I have tried the tasty concinnity resulting from my daughter’s ingenuity, I will occasionally mix epazote and summer savoury in a hot pot of beans, to enjoy a delightful fusion of these bean herbs, originally from two very different cuisines.

Canada Day, observed on July 1st, is fast approaching, and I definitely wanted to share some history on the important role of summer savoury in East Coast Canadian traditions.  As I mentioned, the herb was profusely used in Europe since ancient times, and became naturalized in North America.  In Canada, it may have originally been brought to what is now the province of New Brunswick by French or British settlers.  L’Ancienne d’Acadie is an heirloom Canadian variety of summer savoury named after L’Acadie – Acadia, a French colony established in the 1600s, comprising parts of today’s Nova Scotia, New Brunswick, and Prince Edward Island (The Maritimes), as well as the Gaspé peninsula in Quebec, and parts of Maine, in the US.  Preserved from generation to generation, l’Ancienne d’Acadie was not, however, impervious to the harsh local climate, and transformed into a short, stocky plant with a characteristic strong flavour.  As explained in the herb’s entry of The Albert County Museum (located between Moncton and the Fundy National Park, in New Brunswick), a farmer named Jean Prudent Robichaud (1867-1958) was working for the local First Nations Mi’kmaq people, and received seeds from a woman from the Esgenoôpetitj First Nation at Burnt Church, NB., a French settlement, also a Mi’kmaq community, named for the incident in 1758 when the British burned the church as part of the Acadian expulsion.  Robichaud cultivated the variety, and his descendants kept the variety alive; it has been included in the Slow Food Canada Ark of Taste, a catalogue to represent Canada’s vast, diverse landscape of peoples and foods that might be threatened by industrial agriculture, and seeds are kept in Canadian seed banks.   Summer savoury is such a staple in Maritimes cuisine that it is known simply as “savoury” in Nova Scotia, and often used instead of salt; traditional dishes such as fish cakes, chicken stew with dumplings (Fricot) and Jigg’s Dinner (salt beef, potatoes, turnips and cabbage) are regularly seasoned with summer savoury, and local people generally use the herb in turkey stuffing, instead of sage.   The First Nations people of Mi’kmaq also influenced Acadian cuisine, with the incorporation of native ingredients in dishes such as corn chowder or corn bread, also seasoned, of course, with locally grown summer savoury.

After learning all these facts about Maritimes summer savoury, I had to find some sources!  Terre Promise, located in Île Bizard, Montreal, Quebec, is “a local seed saving company focusing on preserving heirloom, rare, or endangered varieties using ecological methods”; they carry “Acienne D”Acadie” seeds, but I am not sure if this variety would thrive in my very mild growing region.  I also learned that Farmer John’s Herbs is the largest grower and seller of summer savoury in The Maritimes, located in the Annapolis Valley in Canning, Nova Scotia; their philosophy is “to produce what we believe to be the worlds finest summer savoury and use it to create great food products.”  I could not resist and ordered a jar of their dried summer savoury, a seasoning blend, and a baking mix for savoury corn bread.  I shall report on my findings when I receive and try these products.